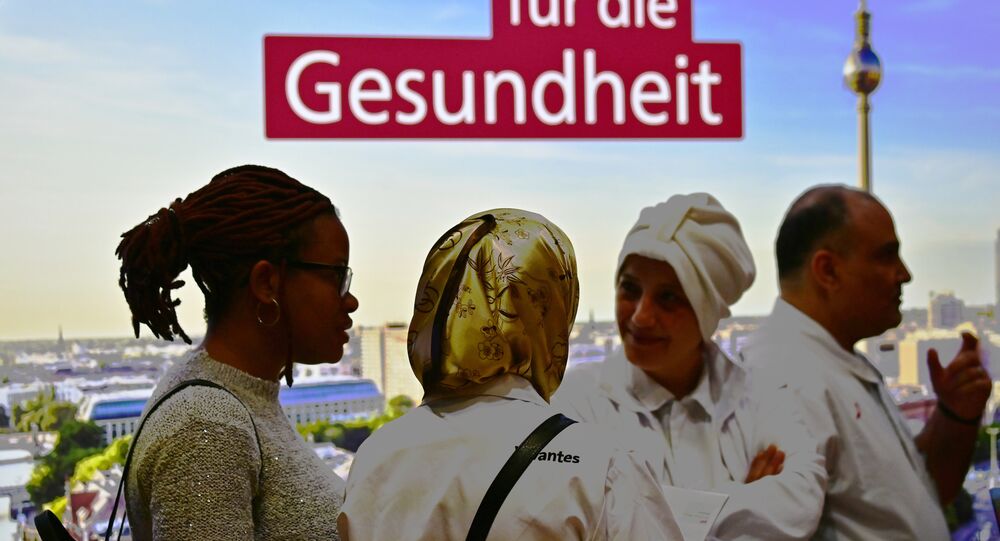 German Finance Minister Under Fire for Cuts on Migrant Spending

The German government has approved a 2020 budget draft and financial plans for the next few years. The country’s key financial document, which should be finalised in June, awaits consultations in parliamentary groups amid criticism from regional authorities over refugee and integration funding.

German state and municipal authorities have lashed out at Finance Minister Olaf Scholz, representing the Social Democrats in the German government, and his 2020 budget draft and financial planning over its refugee funding. The subsidies from the federal budget on corresponding allowances will be significantly reduced.

Such payments as a flat fee per asylum seeker (which is now 670 euros), integration work fees, and accommodation payments for recognised refugees are to expire by the end of this year. And the government plans that a single payment per asylum seeker will be introduced instead of a number of allowances. It is expected to cover their first five years in Germany. In the first year, people eligible for it will receive 16,000 euros, and the sum will shrink in the following years.

According to calculations by the Hamburg Senate Chancellery, the federal funding is to drop from the current 4.7 billion euros per year down to about 1.3 billion euros.

One of the most respected politicians in Angela Merkel’s Christian Democratic Union, Armin Laschet, who is the head of North Rhine-Westphalia's government, was among those who raised their voices against these changes. He told the German outlet Rheinische Post that cancelling the reimbursement of the local authorities’ refugee-related costs could provoke tax increases in the communities, "sparking a conflict that we [in Germany] are were only just able to assuage with some effort”.

He says that the federal government should continue to fulfill its responsibility to adequately support the federal states and municipalities in regard to their integration goals.

"Those who cut back on integration during these times and leave high-debt communities with social hotspots alone have lost all sensitivity to social priorities”, the politician noted.

Hesse’s head of the government Volker Bouffier (CDU) accused the finance minister of trying "to steal at the states’ expense" in his interview with Rheinische Post. He stated that "there will still be considerable discussions between the federal states and municipalities on the one hand and the federal government on the other".

The municipal associations also voiced alarm. The chief executive of the Union of Cities and Local Communities, Gerd Landsberg, told the newspaper that “saving money now means jeopardising the success of integration”, adding that the overall social costs in the medium- and long-term would significantly exceed the short-term savings.

The managing director of the German Association of Cities, Helmut Dedy, echoed his stance, warning that the federal government and the federal states should find a way "that meets the real needs of local communities for refugees and covers the expenses for the asylum seekers".

For his part, the finance minister noted that the government was in constant discussions with the local authorities. According to him, the bill saves time for Germany to develop a long-term migrant policy.

"I don't think it would serve anyone's interests if we say we'll do it in 2021 like this, and then in 2022 like that, and in 2023 we'll see. Instead maybe it'd be good if we came to an arrangement, now that the number of refugees has gone down and there's less pressure, so that if in 2027 there's a new situation where we have great challenges to face we don't have to renegotiate all these questions”, he said, as cited by Deutsche Welle.

The German outlet Die Zeit points out that the number of asylum seekers has indeed decreased significantly. In 2018 the German authorities received 186,000 first and subsequent asylum applications in comparison to 746,000 in 2016. However, the municipal authorities emphasise that many asylum seekers remain in Germany even after their application has been rejected.

The migrant influx, when hundreds of thousands fled to Europe from armed conflicts in the Middle East and poverty in Africa, has been one of the most painful issues for Angela Merkel’s government amid the growing discontent over her migration stance, including the “open borders” policy and Germany’s becoming the largest recipient of migrants. In October 2017, the chancellor's Christian Democratic Union (CDU) and the Christian Social Union in Bavaria (CSU), which now form a government coalition along with the Social Democratic Party of Germany (SPD), agreed on a 200,000-per-year cap for refugees.

Notably, her CDU’s Bavarian sister party took an even harsher stance on refugee and integration policy ahead of the regional elections in autumn 2018. The Bavarian government passed a controversial bill expanding the powers of police in the wake of an influx of migrants, including the right to use online surveillance, facial recognition, postal seizures, drones, body cameras and preventative genetic DNA analyses, and introduced a border police to patrol the German-Austrian border to prevent illegal entries.