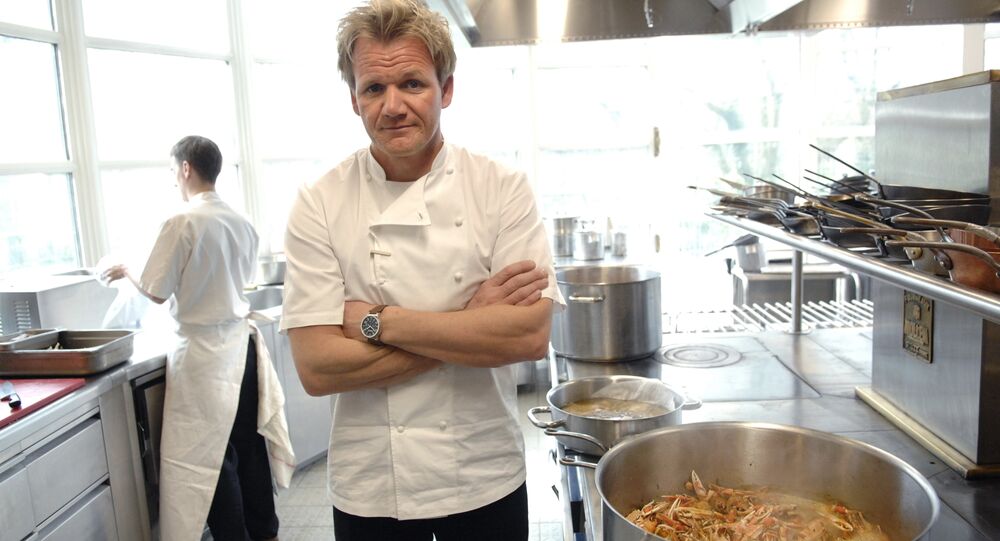 Over the past week, Piers Morgan and Gordon Ramsay have been engaged in a war of words over the fiery chef’s meat-free roasts, with Ramsay telling the TV host to “go f*ck yourself” on James Corden’s Late Late Show.

The row over vegan roast dinners is getting even more heated as The Good Morning Britain presenter Piers Morgan has exposed an old tweet from Gordon Ramsay that revealed the MasterChef US judge was an outspoken anti-vegan before his sudden change of heart.

“Out of nowhere Gordon Ramsay is suddenly embracing his vegan side. The meat free roast. I was a bit surprised, not THE Gordon Ramsay surely? He’s now at the forefront of the vegan revolution and he’s not cynical, he’s not just doing it because he might make some money out of it. No, no. He’s a proper pro vegan guy. Or is he? This is what Gordon Ramsay tweeted about vegan”, Morgan said.

Morgan was apparently hitting back at the “Kitchen Nightmares” star for his appearance on The Late Late Show with James Corden, where Ramsay said, “So, Piers Morgan is now a food critic. Go and f*ck yourself. Seriously? Really?”

But before flashing up the old tweet on TV, Morgan also took to Twitter to remind Ramsay’s fan base of his previous antics, including his sarcastic comments that he was allergic to vegans:

Is this the same @GordonRamsay who when asked in 2016 if he had any allergies, replied 'vegans' — and who last year tweeted that PETA stands for 'People Eating Tasty Animals'? https://t.co/hWcCczClZ4

No wonder the fiery exchange on Twitter and beyond set off a landslide of reactions on social media. While some voiced support for Ramsay, saying that people can change their views based on new information…

People change mate, We’re not born vegan! I’d been a chef in the #RN 15 years when I went vegan! Adapt and overcome, constantly re evaluting and adjusting makes us better people

Can’t forget & I LOL at that @GordonRamsay tweet to @peta but I can see a good example of people changing for better & that’s exactly chef Ramsay is. I am inspired by his pro #vegan 🌱coz it’s all about #CompassionateDiet filled with love & care of all living in this environment.

It’s not much of a surprise that Piers doesn’t understand the concept of personal growth in light of new information.

…others supported Morgan’s stance that the world-famous chef was jumping on the bandwagon to make more money on vegans:

But he’s jumping on the bandwagon coz it’s going to make him more money! It’s the in thing at the minute

Ramsay will go wherever his brand leads. Principles and ethics mean zero

Doing it for the coin

The beef with the vegan dish  started last week, when the chef posted it on Twitter.

Morgan, another vocal critic of the vegan lifestyle, couldn’t remain on the side-lines and apparently couldn’t believe that Ramsay given in to veganism:

Oh FFS, Ramsay… not you as well? This looks utterly revolting. 🤮🤮 https://t.co/ODollOx0PF

Ramsay has yet to respond to Morgan’s latest jab.