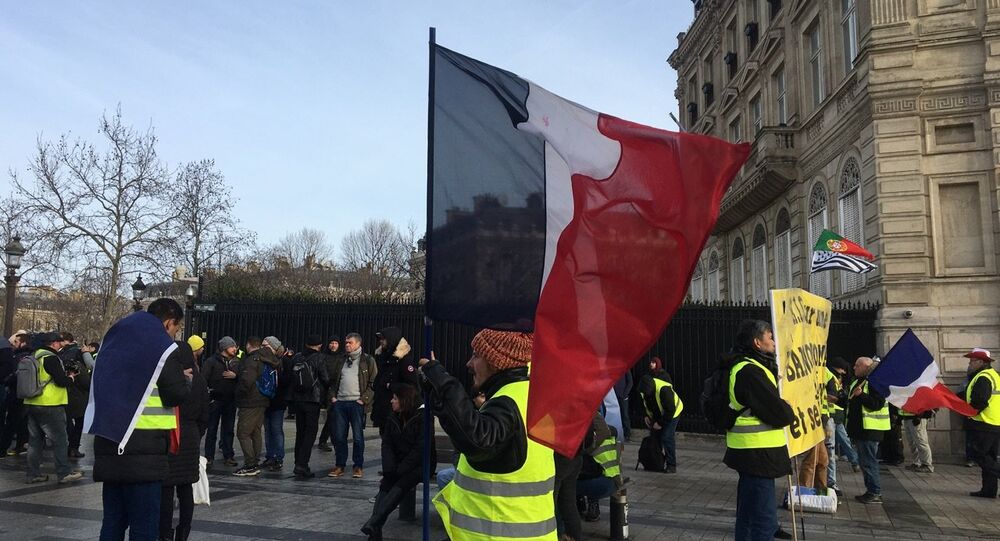 MOSCOW (Sputnik) - Protests in France will continue no matter what security measures the French government intends to take, as increasing pressure is a poor answer to the people’s socioeconomic demands, Christophe Chalencon, who calls himself the yellow vest movement's spokesman, told Sputnik on Monday.

The comment comes after media reported earlier in the day that French President Emmanuel Macron was mulling banning all rallies on the Champs Elysees after a group of aggressive activists smashed boutiques on the main Parisian avenue on Saturday. The 18th week of rallies was also marked by clashes with the police, with the protesters acting aggressively and provocatively.

"The problem is that even if they prohibit protests at the Champs Elysees, it won’t stop the manifestations, the manifestations will move elsewhere and the episodes of destruction will continue … They can implement all the security measures they want, but people are determined. People who didn’t see the changes that could improve their living conditions, will continue fighting. And the more weeks pass, the more determined they are to stand till the end," Chalencon, one of the yellow vest leaders, said.

'Repressions' Not a Solution

Chalencon stressed that the yellow vests were "not vandals," and these were actually some "black sheep" that come to protests only to crash everything.

According to Chalencon, the "clear" rise in violence is yet understandable since the government failed to come up with a political solution to the socioeconomic problems that triggered the protests.

"I am against the violence, but I can understand it. The authorities fail to come up with political decision and people increase the pressure … Today Macron doesn’t give an answer, his response is increasing repressions. And what we saw on Saturday is an answer to it. I’ve been saying that increasing pressure could not lead to anything but more violence, because it’s not with repressions that we increase people’s purchasing power," he added.

© Sputnik / Irina Kalashnikova
Macron: Yellow Vests Want to 'Destroy Republic', Recent Rally Not Demonstration
Chalencon suggested that Macron, who, he says, tightened security around the Elysee Palace and then went for a skiing trip at the weekend, was thereby seeking to escape pressure.

"He left the capital as he knew there would be a great pressure. There were 10 CRS (Republican security companies), 1,000 policemen who circled the Elysee Palace, fearing intervention. This means that the government is afraid. If they don’t come up with political solution, this government is dead, it’s certain," he claimed.

Macron Should Sit Down With Protesters

The yellow vest leader opined that Macron was making a grave mistake by ignoring the protesters, instead of sitting down at the negotiating table with them.

"The problem of Macron is that he doesn’t even question his politics … He needs to meet the yellow vests, sit down with them, listen to what they have to say and come up with a solution together. And he avoids it as if it didn’t exist. And why he doesn’t want it is because he knows that he will not be a winner in this situation, that he will have to change his politics, otherwise people will continue protesting," he said.

According to Chalencon, the president’s initiative to launch 1.5-month national debates amid the protests was an attempt to win time and "approach the European elections calmly," instead of finding a solution to the deadlock.

Chalencon, in turn, recalled that the yellow vests created a political movement "Citizen Evolution" in the run-up to the May European Parliament elections and stressed the need to change the system "where people vote for someone who doesn’t represent their interests out of fear."

"In the situation of high abstention that we have, one needs to succeed in presenting a different political program with the three pillars: ecology, social sphere and democracy. We need to inherit the 5th republic legacy, but come up with another political spectrum," he said.

The wave of the yellow vest rallies started in France in mid-November over planned hikes in fuel taxes. While the French government abandoned its plans to raise fuel taxes and introduced other measures to improve the country's socioeconomic situation, protesters continue to take to the streets across France every weekend to express their wider discontent with the government's policies.