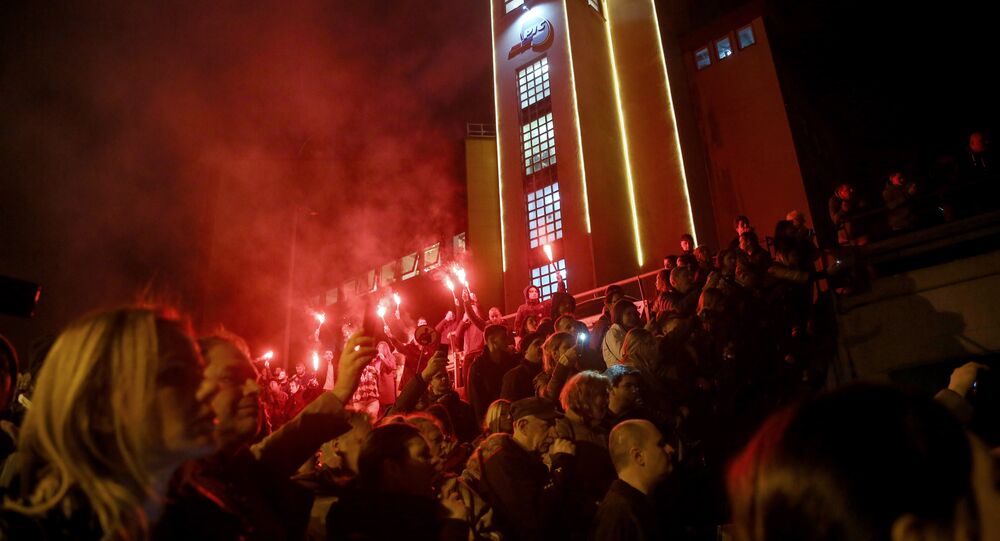 Peaceful weekly protests against Serbia’s current president, Aleksandar Vučić, have swept across the country since early December, with demonstrators demanding his resignation.

In a video recorded inside the presidency building in downtown Belgrade on 17 March, Serbia’s President Aleksandar Vučić vowed to defend law and order amid massive rallies in the country.

Protesters gathered in front of the presidential headquarters on Sunday and demanded his resignation for several hours, but Vučić refused to bow to the pressure. Serbian television broadcaster, RTV Pink, showed his video message on its YouTube channel: “I’m here and I won’t move from a place they want to occupy”.

During his address, he branded opposition figures, including 2017 right-wing presidential candidate, Boško Obradović, former Belgrade mayor Dragan Djilas, and Vuk Jeremić, who used to be Serbian Foreign Minister, as “fascists”, “thieves”, and “hooligans”.

“They have come across a hard nut to crack. They have come across somebody who is not afraid of anything. I believe that nobody has ever held a press conference in these circumstances. But I wanted to show to the people of Serbia that fear from hooligans, thugs, fascist leader Boško Obradović and tycoon leaders Djilas and Jeremić should not exist”, he said.

The president lashed out at the protest leaders, saying that "fascist Obradović  and oligarchs Djilas, who snatched $500 million, and Jeremić  want to return to power to continue stealing. I am their target because I’m working for political consolidation and economic development of Serbia”.

📷 The crowd of anti-govt protesters currently outside the Serbian Presidency in Belgrade.#1od5miliona pic.twitter.com/h280vJqaSb

Vučić further said that falling ratings were forcing the opposition to resort to drastic measures as the police were trying to keep protesters out of the presidency without using force.

“There are about 450-500 [people], no more than that, they are not violent, Boško Obradović, Djilas and Jeremić, a gang of thieves and fascists, who have decided to destroy the country, are violent. […] There will be no more violence. Serbia is a democratic country of law and order and Serbia will know how to respond”, the Serbian president added.

His televised speech came a day after protesters stormed the state-run TV headquarters, RTS, in Belgrade, accusing the media of biased coverage of the rallies and demanding air time. Two hours later, the police forced demonstrators out of the building.

“People who think differently [from the opposition leaders inciting violence] must understand that they are allowed to protest, fight politically, vote for whomever they want, but that violence is forbidden is Serbia”, Vučić said in response to the incident.

Serbia’s weekly protests against Vučić began in early December, with people allegedly being mobilised to take to the streets by the Alliance for Serbia, which groups some 30 opposition parties and movements.