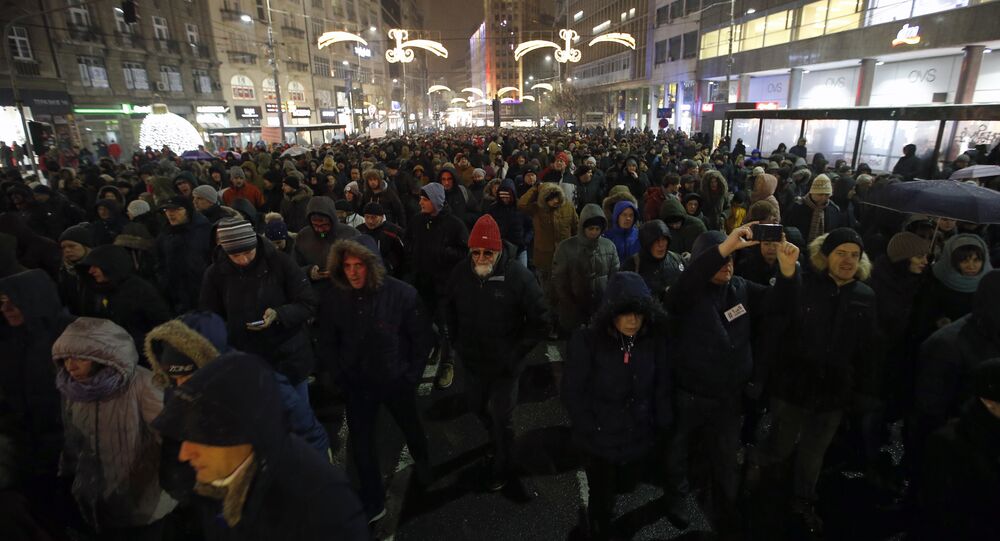 Riot police arrived at the scene in downtown Belgrade, entered the TV headquarters and began to peacefully escort the protesters out of the building one by one, according to The Guardian.

The opposition demonstrators protesting against Serbian President Aleksandar Vucic seized the Radio and Television of Serbia (RTS) building in Belgrade. According to media reports, the reason for the seizure was the unwillingness of the television company's management to invite opposition leaders Boshko Obradovic and Dragan Djilas to appear on political talk shows.

Protesters invaded the TV headquarters building using a chainsaw, according to eyewitnesses.

Serbs are entirely insane. Here's a photo of a protestor carrying chainsaw merely an hour ago inside the Serbian Broadcasting Corporation and it's studios and hallways. @RTS_Vesti #Belgrade #Serbia #Europe

What a time to be alive. They want to topple down the regime.
CHAINSAW pic.twitter.com/OhNykaeYjE

"For the past months we have been asking only for one thing — to allow protest organisers to speak on state television," said Bosko Obradovic, leader of the Dveri political party.

© CC BY 2.0 / Jovan Marković
Protests Against Serbian Authorities Held in Belgrade (PHOTO, VIDEO)
The head of RTS, Dragan Buyoshevich, later said that it was possible to resume the broadcast only after the police had withdrawn the demonstrators from the building. He stressed that RTS is independent according to its stated editorial policy, but that the protesters had decided to determine the agenda of the channel, thereby depriving the protest itself of legitimacy.

"Everyone who is in the Radio Television Serbia building this evening will be held responsible," Interior Minister Nebojsa Stefanovic said before the police took action.

Later, riot police arrived at the scene and peacefully escorted all of the demonstrators out.

The mass protests in Serbia were sparked by an attack against the leader of an opposition party, who received a powerful blow to his head in late November. Police later announced that the suspects in the case had been detained, but the country's opposition accused the authorities of allowing political violence. The first rally against Serbian authorities' policies and the country's president, Aleksandar Vucic took place in the Serbian capital on December 8.

‘Stop the Treason’: Big Turnout in Fifth Week of Rallies Against Serbian Leader