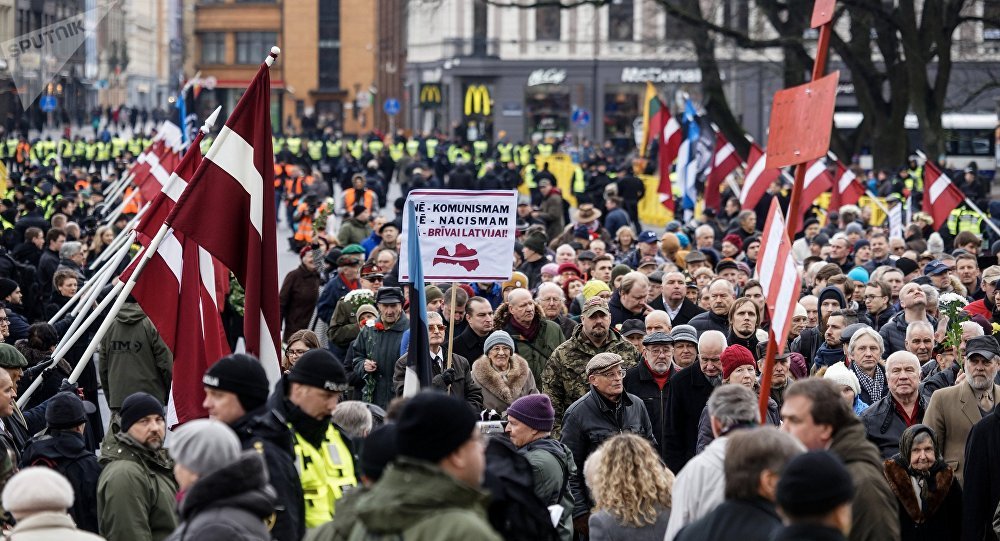 MOSCOW (Sputnik) - The Russian embassy in Latvia condemned the march of Waffen-SS legionnaires and their supporters in the Latvian capital of Riga and called this event an act of disgrace.

"What a disgrace! Former legionnaires of Waffen-SS and their supporters are again 'marching' with honor in the center of a European capital. And this happens on the eve of the 75th anniversary of the liberation of Riga from Nazi invaders!" the embassy said on Twitter.

Rallies commemorating deceased members of the Latvian Legion of the Waffen-SS are held annually in Riga on 16 March. Over 1,000 people took part in the event in Riga on Saturday.

Similarly, the Russian Embassy in Canada has also slammed the controversial event as an ignorance of "hard fact".

#Nazi Waffen SS veterans & sympathizers defiantly & freely march on March 16 in Riga, #Latvia recognized by authorities as national heroes. Hard fact ignored by many in the West that can't be dismissed as "Kremlin propaganda" https://t.co/6r88vqaxxU pic.twitter.com/GQGAsS802d

© Sputnik / Stringer
Noisy Rally in Kiev Commemorates WWII Nazi Collaborator Bandera (PHOTOS)
The Waffen-SS was established as an armed wing of the Nazi party. It fought alongside the German regular army in World War II and provided guards for concentration camps in Germany and abroad. It was ruled a criminal organization at post-war Nuremberg trials. The Latvian Legion was created in 1943 and it consisted of two Grenadier Divisions of the SS.

The annual march has become a cause for harsh criticism by a number of international anti-fascist organizations as well as of governments worldwide, including Moscow.

In particular, Moscow has repeatedly expressed concern over a surge of neo-Nazi movements and policies which glorify Nazi collaborators in Ukraine, Poland and the Baltic states. Rallies in memory of deceased members of the Latvian Legion of the Waffen SS in Riga and of Stepan Bandera — the leader of the Ukrainian nationalist movement and the Ukrainian Insurgent Army, which collaborated with Nazi Germany during World War II and was responsible for numerous atrocities against civilians — are reportedly held regularly in Ukraine, Poland and the Baltic states.