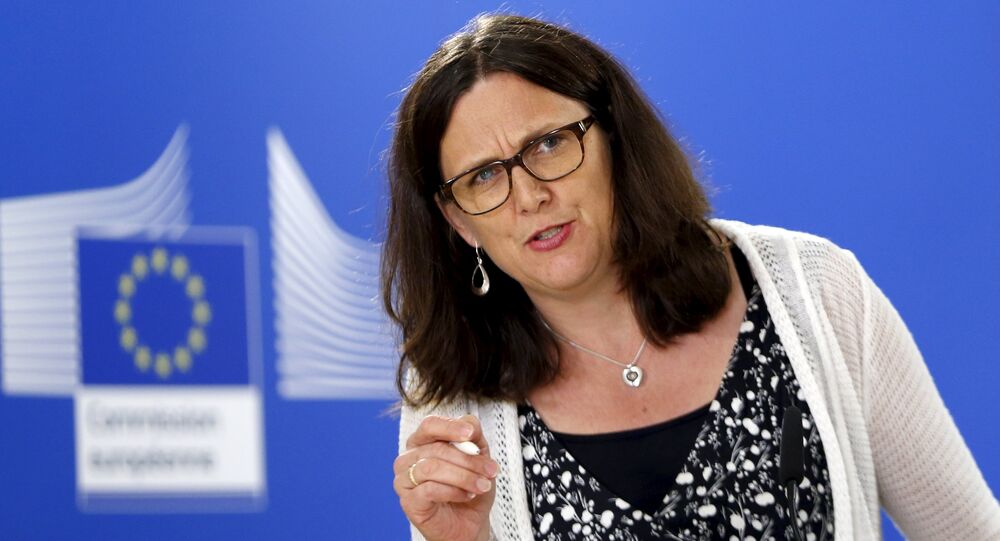 "I have conveyed a very clear message to our counterparts as late as last week, but also before that, that unilateral trade actions by the US on EU imports would risk damaging our efforts to strengthen transatlantic relations at a critical time. I also made it clear that… if the US did take unilateral trade measures against us, we would immediately respond. Indeed, the negotiations [on duties on industrial goods] would stop,… and we would also promptly adopt rebalancing measures [in trade with the United States]," she said, speaking in the European Parliament.

She, however, expressed hope that such actions by the United States would not follow.

The European Commission does not intend to enter into a trade agreement with the United States on the removal of duties on manufactured goods until Washington cancels additional tariffs imposed on imports of steel and aluminum products from EU member states last year, Malmstrom said.

"In the proposed mandates there are clear conditions. We could not conclude anything if the tariffs on steel and aluminum duties would not be lifted," she said.

© AP Photo / Markus Schreiber
EU Commission Imposes Protective Measures on Steel Imports Amid US Tariffs
Last summer, the European Commission introduced so-called rebalancing measures — additional 25-percent duties on imports of certain US goods to the European Union worth about 3 billion euros. This move was a response to the United States increasing tariffs on imports of steel and aluminum products from Europe. This is one of the measures taken by the European Commission under the World Trade Organization (WTO) rules in connection with the actions of the United States.

Last year, Brussels and Washington created a working group to promote the trade agreements reached during the meeting of European Commission President Jean-Claude Juncker and US President Donald Trump in Washington in late July. These agreements concern deliveries of liquefied natural gas (LNG) from the United States to the European Union, as well as tariffs for non-automotive industrial products, trade in services, pharmaceutical, chemical and medical products, soybeans, and WTO reform.

Malmstrom noted that there are no opportunities to return to discussion of the Transatlantic trade and investment partnership (TTIP) between the European Union and the United States in the foreseeable future.

"For different reasons, it was not possible to advance it under the [US President Barack] Obama administration, and it is not possible in any foreseeable future to advance now either, and of course also because the US has withdrawn from the Paris [Climate] Agreement," she said, speaking at the European Parliament.

© Sputnik / Alexey Vitvitsky
EU Commission Registers European Civil Initiative Against TTIP
Earlier in the year, the European Commission has requested from EU member states a mandate to negotiate with the United States on the creation of a treaty that removes duties on industrial goods trade. It is now awaiting the decision of the EU Council.

"It is a limited agreement… on industrial goods, including fisheries and cars… It is not, however, a full free trade agreement. It is not taking the TTIP out of the freezer," Malmstrom said.

Negotiations on the Transatlantic trade and investment partnership between the European Union and the United States remain frozen.