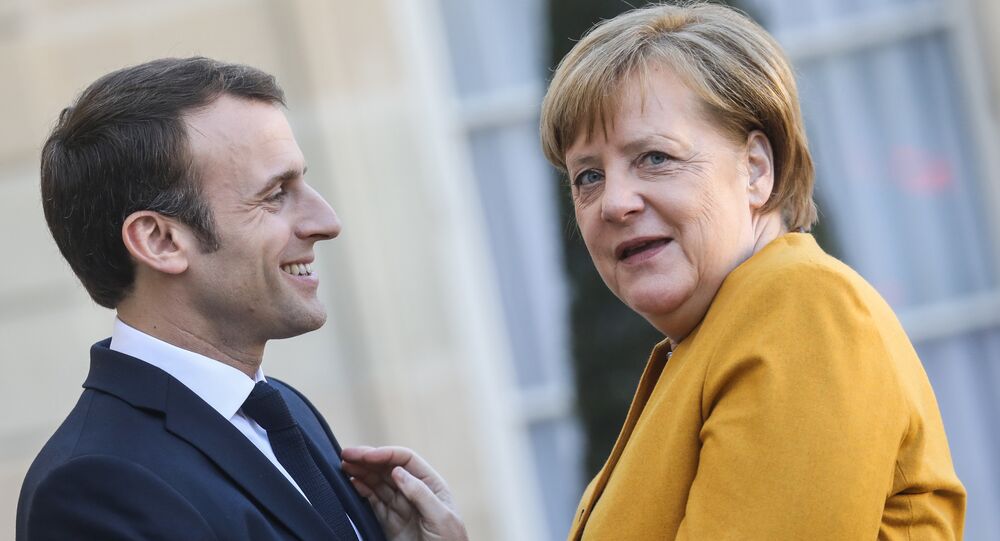 An op-ed by Annegret Kramp-Karrenbauer, named Angela Merkel’s possible successor as chancellor, has diverged from the French president’s vision of Europe’s future on a number of issues, including a proposal to get rid of the European Parliament’s seat in Strasbourg, raising speculations about disagreements between Paris and Berlin.

German Chancellor Angela Merkel has endorsed proposals by her successor as the leader of the Christian Democratic Union, Annegret Kramp-Karrenbauer, outlined in her response to the essay “European Renaissance” by Emmanuel Macron. Although Merkel chose not to respond to her French counterpart herself, she has voiced support for creating a common European aircraft carrier that AKK (the acronym the German media use to refer to Kramp-Karrenbauer) proposed to build in addition to a European combat jet. Although the incumbent chancellor added that the EU “has to do other things as a priority", she still said it would be a good idea.

"It's right and good that we have such equipment on the European side, and I'm happy to work on it”, the German chancellor said.

Merkel also ok’d AKK’s idea about granting the EU a joint seat in the UN Security Council, which could entail France’s giving up a permanent position in it. The German leader, who has been campaigning for an SC seat for years, called the proposal "a very good concept for the future". She said it would allow for a “gathering the European voices", but also admitted that France being “skeptical” about the prospect is “well-known”.

Earlier the government’s spokesman Steffen Seibert noted that AKK’s vision is "in harmony with the thoughts of the chancellor”.

Although the CDU leader agrees with Macron on a number of issues, including defence cooperation, as she called for setting up a “European security council involving Great Britain”, border control and climate policy, in her essay, titled “Fixing Europe”, it still diverges from the French president’s proposed series of measures. Among others, she rejected the idea of Europe-wide minimum wage and his social proposals saying “the communisation of debts, the Europeanisation of social services and the minimum wage would be the wrong way”. Besides, she suggested the European Parliament should scrap its seat in the French city of Strasbourg as an “anachronism” and have only one headquarters in Brussels.

However, commenting on her essay, AKK tried to downplay any speculations about the disagreements between the two key European allies.

“There’s no rift. The fact that the CDU has a different political view on the issue of redistribution, on the issue of completely uniform social standards … than the French is nothing new”, the CDU leader told Welt television.

Macron’s open letter was published on 4 March and contained a set of proposals to EU citizens ahead of May's European elections that would lead to a "European Renaissance”. In particular, the French leader suggested that the European Union should create a common European border force and set up a European agency for the protection of democracies that would help EU members shield their elections from cyberattacks and other forms of meddling. It received an endorsement from President of the European Council Donald Tusk as well as Belgian Prime Minister Charles Michel.

'Europe is in Crisis, But Macron Doesn't Have the Right Diagnosis' - Researcher