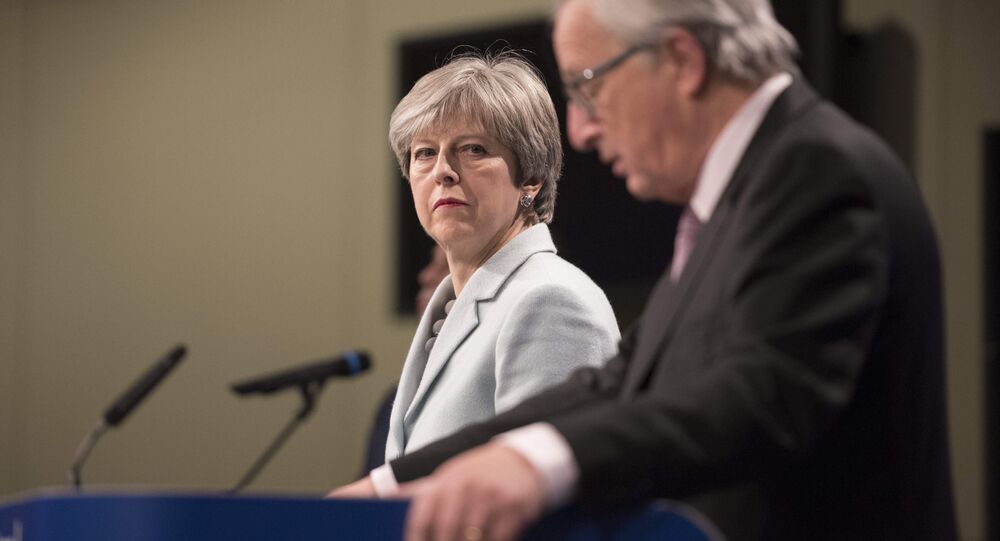 LONDON (Sputnik) - UK Prime Minister Theresa May's office told Sputnik on Monday that she and European Commission President Jean-Claude Juncker have agreed on the Brexit withdrawal agreement ahead of the UK House of Commons' Tuesday vote.

According to the prime minister's office, the UK government will introduce two new documents on Brexit. In particular, one of the documents will confirm that the EU will not use the backstop mechanism as a "trap" for the United Kingdom. The second document will envisage the UK-EU commitment to replace the "backstop" with an alternative option by December 2020.

"[May secured] legally binding changes that strengthen and improve the Withdrawal Agreement and Political Declaration", Lidington said as quoted by The Telegraph newspaper.

May and Juncker met in Strasbourg late on Monday to discuss Brexit ahead of the crucial vote on the withdrawal deal in the UK parliament, European Commission chief spokesperson Margaritis Schinas said. Schinas said earlier on Monday that Brussels had offered London further reassurances on the temporary nature of the Irish border backstop.

Meanwhile, the prime minister's office refuted as "complete speculation" the media reports that the UK government could switch a meaningful Brexit vote in the Commons on Tuesday to an indicative one.

© AP Photo / Geert Vanden Wijngaert
The Lost Weekend: Tusk and Barnier Tease May as Chances of Brexit Deal Fade
If the government's deal is not passed on Tuesday, a vote on a no-deal scenario is reportedly expected to take place on Wednesday. If that is rejected as well, a vote on Brexit extension will be held on Thursday. At the moment, the United Kingdom is expected to leave the bloc on 29 March.

The Times newspaper reported Monday, citing leading Tories in the Commons, that senior UK lawmakers from the ruling Conservative Party have called on May to postpone Tuesday's vote on the Brexit deal unless the EU agrees to major concessions in order to prevent another humiliating defeat in parliament.

In particular, the lawmakers advised the prime minister in phone conversations that she should delay the vote and put forward a motion describing a divorce agreement that would finally heal divisions over the issue within May's own party, the media outlet said.

© AP Photo / Niall Carson
If EU Pushes UK to Leave Without Deal, It’d Be Much Harder to Guarantee no Border in Ireland – MP Leadsom
The first parliamentary vote on the divorce deal took place in January and resulted in May losing by an unprecedented 230-vote margin.

The prime minister has since been trying to negotiate changes to the agreement, in particular regarding the highly unpopular backstop provision, which is designed to ensure a frictionless Irish border and would, as many fear, tie the United Kingdom to the EU customs union.