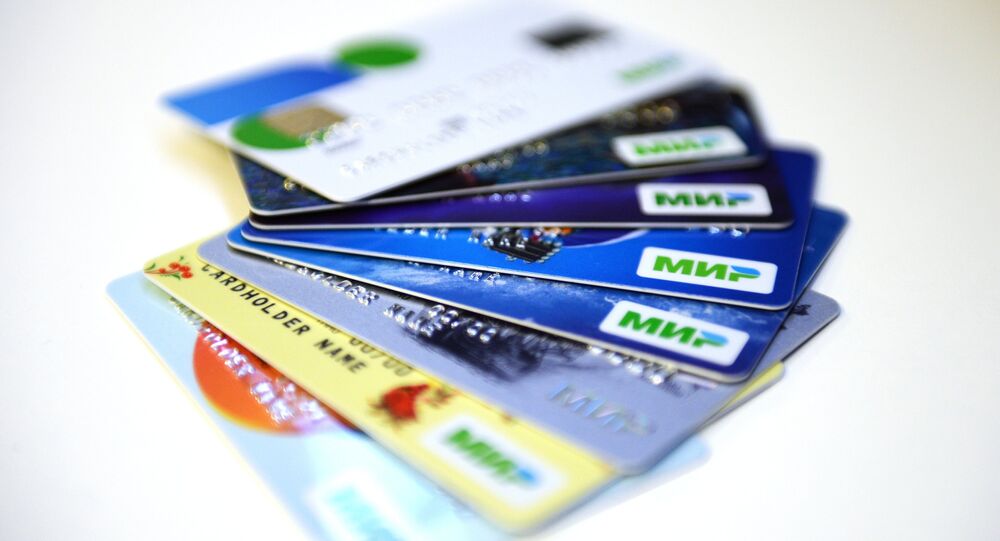 The first phase of the trial will be limited to 200 customers.

In April, UK banking giant NatWest will launch a pilot scheme under which its customers will be able to spend over US$40 (£30) using contactless cards via embedded fingerprinting technology — if successful, it could mean an end to PINs.

The revolutionary cards contain an electronic copy of the customer's fingerprint on one corner — if the customer places the relevant finger on that area while pressing the card on a contactless payment terminal, the card authorizes a payment without the need for keying in the four-digit number. If a card is stolen or lost, no one will be able to use it to make a single payment.

"This is the biggest development in card technology in recent years and we are excited to trial the service," said David Crawford, 'head of effortless payments' at NatWest.

© Sputnik
Proceed to Cashless Society With Great Caution
NatWest said retailers would not have to make any changes to existing payment terminals to accept the new cards, and it was working with Visa and Mastercard to ensure it would be accepted in all locations. If a card is stolen, the thief will not be able to use it as a payment is only authorised if the user's fingerprint matches the data on the card at the point of sale.

A potential stumbling block for the widespread implementation of the system is the bank's ability to gain customers' fingerprints — for while the customers in the trial will be asked to visit their local branch to provide a copy, for the scheme to adhere to data protection laws and thus operate more widely, fingerprints will need to be stored on bank cards themselves rather than a bank's internal servers.

© Sputnik / Vladimir Trefilov
Bank cards of international payment systems VISA and MasterCard
Moreover, while the fingerprinting technology is new to UK banks, it already operates on Google Pay and Apple Pay — and many have found it difficult to complete transactions using the method, not least because many retailers do not allow customers to exceed the $40 (£30) contactless limit.

Nonetheless, if the scheme is adopted across all NatWest customer accounts, it'll be a further step towards a cashless Britain — in 2018, over six billion payments were contactless, amounting to US$122 trillion (£94 trillion), making the UK Europe's most cashless society by far.

The risks of contactless payments are well-documented, well-known and feared in many quarters, but while this innovation seemingly counteracts many of these concerns, the central issue of digital payments depending upon a centralized system still means if — as on 1 June 2018 — Visa or Mastercard suffer an unprecedented hardware failure, the implications for millions of customers the world over would be catastrophic, leaving them unable to pay for vital goods and services, or even stranding them many miles from home, for an uncertain period of time.

Warnings about purely cashless societies have occasionally been sounded at the highest echelons — for example Swedish Central Bank Governor Stefan Ingves repeatedly warned in 2018 the lack of cash transactions in his country is a problem, damaging the economy's resilience, and making even brief breakdowns an extremely parlous prospect for all. He has proposed new regulation to protect the long-term status of the Swedish kronor by forcing banks to handle cash.

"There are those who [think] we've nothing to fear in a world where public funds have been completely replaced by private options. I think they're wrong. That commercial players in all scenarios would shoulder the responsibility to meet public demand for safe payments is unlikely. If nothing is done, Sweden is heading for a situation where all means of payment the public has access to are given and controlled by commercial actors," he wrote in February that year.