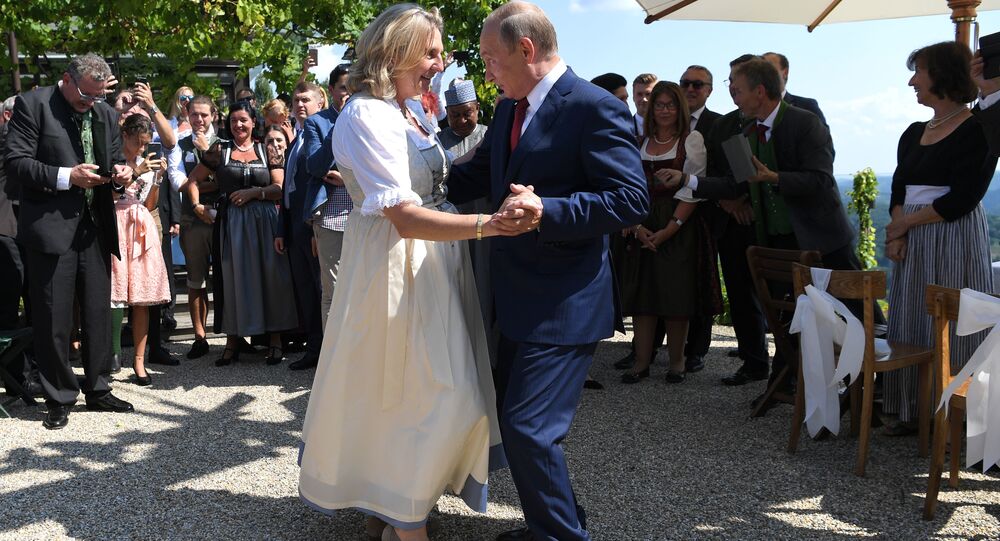 Russian President Vladimir Putin attended the wedding of Austrian Foreign Minister Karin Kneissl in the city of Graz in August 2018. Apart from dancing with the bride, he shouted "Now a kiss!" in German, and signed his name across the newlywed's car.

Austrian Foreign Minister Karin Kneissl has announced that she will soon have the opportunity to again dance with Russian President Vladimir Putin.

“Maybe I will dance with him again next week when I visit Moscow. He is really a good dancer," the Austrian Tiroler Tageszeitung newspaper cited Kneissl as saying during an event dedicated to the International Women's Day on Friday.

She added that she also managed to dance with British colleague Jeremy Hunt, but that she considers his dancing skills worse than those of the Russian president.

“With all due respect to the British foreign secretary, Putin is the best dancer," Knessl underscored.

Her first dance with Putin took place during her wedding ceremony with businessman Wolfgang Meilinger in the Austrian city of Graz on 18 August 2018.

According to the Russian president’s press secretary, Dmitry Peskov, Putin spent about sixty minutes at the ceremony, later shouting "Now a kiss!" in German and signing his name across the newlywed's car, among other things.

WATCH Putin Arrive in Russia-Made Limo at Summit With Trump