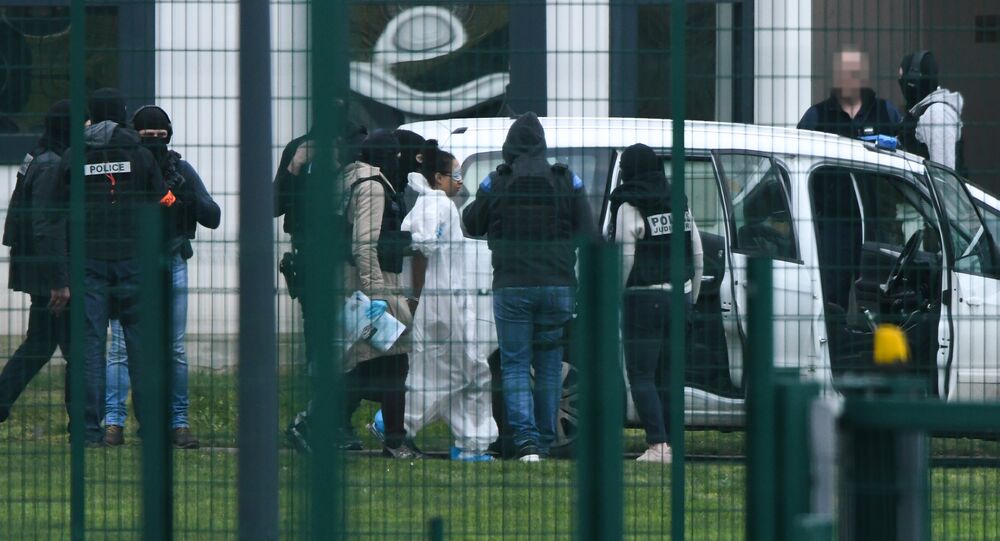 Michaël Chiolo was serving a 30 year sentence for kidnapping and torturing an 89-year-old Holocaust survivor. He had become a jihadist only after entering prison and changed his name to Abdel Karim.

More details are emerging about an incident in a high security French prison on Tuesday 5 March when jihadist prisoner Michaël Chiolo wounded prison guards with knives which had been smuggled in by his pregnant partner.

Officers from the specialist RAID unit shot and injured him and fatally wounded his partner after a 10-hour siege in the family visiting area of the prison in Conde-sur-Sarthe, near Caen in Normandy.

It is understood the woman had got pregnant during a conjugal visit and had not been searched because of her condition.

She was named late on Wednesday, 6 March, as Hanane Aboulhana, 34, from Mulhouse.

​[Tweet: "#CondéSurSarthe: The prisoner and his companion were arrested by RAID. I want to salute their courage, composure and professionalism. Once again, our police officers honoured their uniforms and their motto: "To serve without fail". Respect and gratitude."]

Anti-terrorist prosecutor Remy Heitz said Chiolo — who had changed his name to Abdel Karim — shouted Allahu Akbar (God is Great) during the attack.

© Photo : Facebook
Michaël Chiolo was jailed for 30 years for murdering an old man and had become radicalised in jail

"He said he wanted to avenge Cherif Chekatt. He said he was wearing an explosive belt and threatened to use it," said Mr Heitz, before confirming the belt was fake.

Chekatt was shot dead by police after killing five people and wounding 11 at a Christmas market in Strasbourg in December.

"There is no doubt as to the terrorist nature of this attack," Justice Minister Nicole Belloubet said.

The Conde-sur-Sarthe prison is one of France's most secure jails and does not suffer from overcrowding, said Ms. Belloubet.

But she said Chiolo was not housed in a secure wing for radicalised inmates which was opened in September.

Chiolo was "not easy to handle and so a very close eye was kept on him," the minister added.

French prison staff have been protesting about working conditions and staged protests across the country on Tuesday.

In January 2018 a German Islamist extremist, Christian Ganczarski, jailed for helping organise an attack against a synagogue in Tunisia, wounded three prison guards in a knife attack at Vendin-le-Vieil, northern France.

Chiolo and an accomplice were jailed in 2015 for choking to death Roger Tarall — who had spent the war in Dachau concentration camp — after tying him up while robbing his home.

He converted to Islam in prison and was later sentenced to an extra year in jail for asking fellow inmates to "re-enact" the attack by jihadist gunmen on the Bataclan concert hall in Paris in November 2015.

Chiolo's lawyer, Pauline Brion, said he was "intelligent" and "educated" and met his girlfriend in prison.

"He had written to someone after converting to Islam for them to find him a wife," said Ms. Brion.