On the eve of the Salisbury incident one-year anniversary, Williamson said that Britain recognised the need "to face evolving threats," with the new investment "ensuring we have a world-leading capability."

"The funding will increase the speed and accuracy with which the potential origins of substances can be analysed, helping the authorities identifying attackers faster and improving public safety. It will also allow faster decontamination and recovery of vehicles and assets, as well as improvements to counter radiological and nuclear threats," a release by the Ministry of Defence elaborated.

Military chiefs plan to deploy drones and robots into potentially hazardous areas, which will allow personnel to avoid dangerous and contaminated areas. Investment in new technical capabilities by means of boosting the Defence Science and Technology Laboratory's ability to analyse substances, as well, as working on medical solution to combat effects of chemical agents — are among goals set out by the Ministry.

The decontamination work in Salisbury and Amesbury over the last 12 months has been a "complex and daunting challenge for the Armed Forces," said the Standing Joint Commander (UK) Lieutenant General Tyrone Urch.

The new million-pound investment comes in addition to another sizeable financial boost announced by the Ministry less than a year ago.

In March 2018, Gavin Williamson disclosed the decision by the government to invest £48 million in a new Chemical Weapons Defence Centre "to ensure we maintain our cutting edge in chemical analysis and defence." 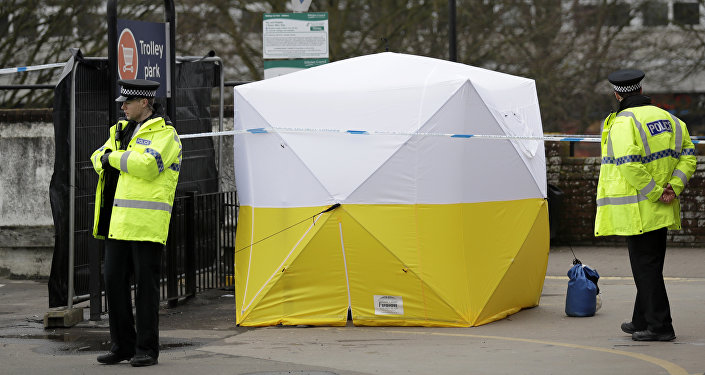 © AP Photo / Matt Dunham
Salisbury One Year On: Skripals Vanish, No Proof of Russia's 'Role' Given
On March 4, Skripal and his daughter Yulia were found unconscious on a bench near a shopping center in Salisbury. London claimed they were poisoned with a military-grade A234 nerve agent and accused Moscow of staging the attack, provoking a huge international scandal. London also said that it suspected Russian nationals Alexander Petrov and Ruslan Boshirov, allegedly working for Russian intelligence, of performing the attack.

In July, London also put blame on Russia for the poisoning of two people in the city of Amesbury, who were allegedly exposed to the same nerve agent that was used in Salisbury. Several days after, one of the victims, Dawn Sturgess, died in hospital.

Russia has denied Britain's accusations, drawing attention to absence of proof  of Russia's involvement. At the same time, Russian Foreign Ministry said it was ready and willing to hold serious discussion with London on the matter.

Commenting on the lack of information about the Skripals' location and insufficient cooperation on London's part, Russian Foreign Minister Sergey Lavrov said it proves that the UK government and intelligence has "something to hide."