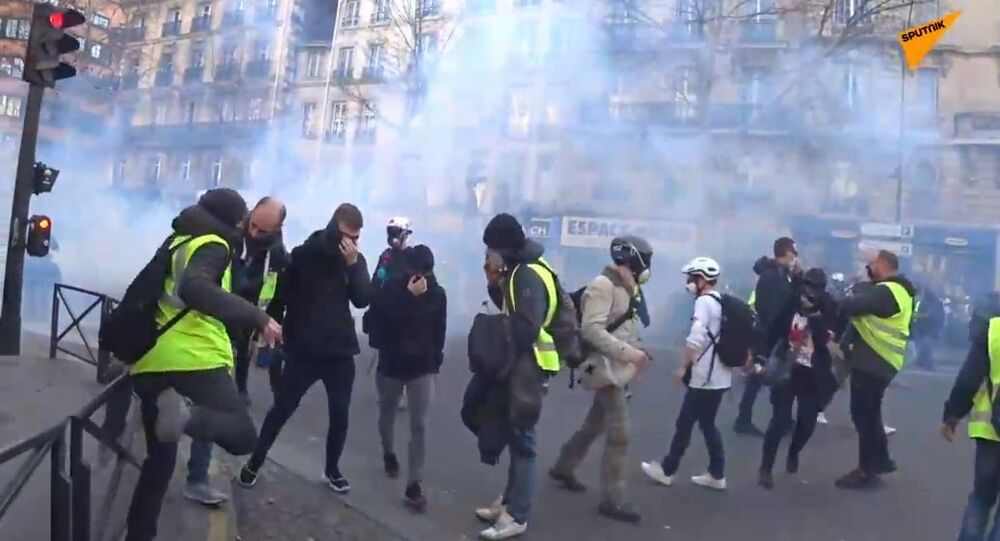 Large-scale demonstrations began in France on 17 November last year in wake of the government's decision to raise fuel taxes. Despite the French authorities later discarding their plans, yellow vests protesters, dissatisfied with the government's social policies, have continued to rally across the country.

The French police have detained nine people in the French capital on Saturday during the so-called yellow vest demonstrations in Paris, which have entered their 16th consecutive weekend, The BFMTV broadcaster reported.

The broadcaster pointed out that more than 5,000 people took part in the protests across France on Saturday with some 1,300 of them having participated in the rally in Paris.

© Sputnik /
Yellow Vest Leader Allegedly FILMED Saying 'Paramilitaries' Ready to Bring Down Macron's Gov't
According to the channel, in the city of Nantes local police have fired tear gas against protesters following clashes between yellow vests and law enforcement agents.

Yellow vests demonstrators have gathered to protest against French President Emmanuel Macron's economic policies for the 16th week in a row.

According to the French Interior Ministry, about 41,500 people took to the streets all over the country during the last protests, marking a clear decrease from the peak of 282,000 at the start of the yellow vests movement.