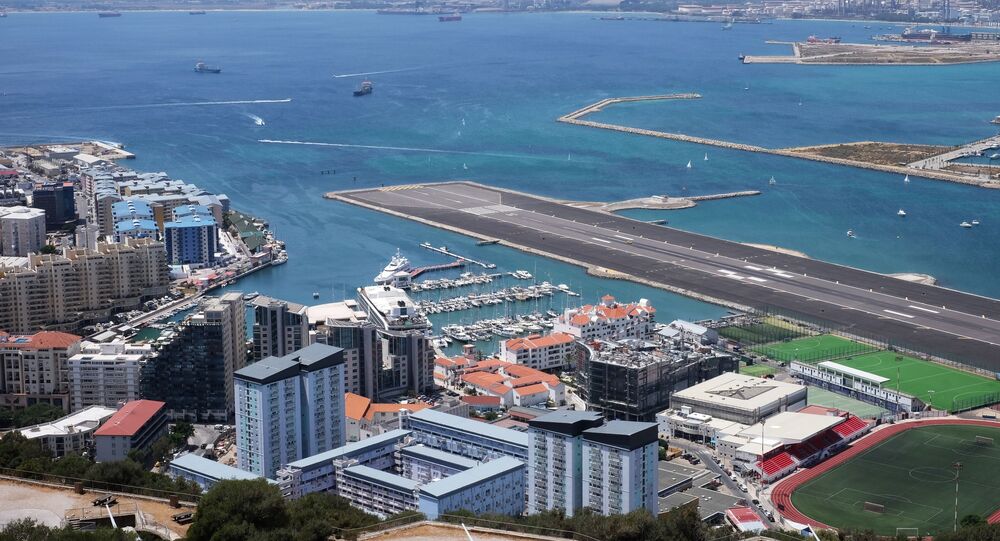 Spain has lobbied aggressively to get European officials to include the phrase "Gibraltar is a colony of the British crown" into its contingency plan in the event of a no-deal Brexit as the deadline on the UK's exit from the European bloc approaches.

The British government is incensed over EU legislation offering apparent support for Spain's claim over the 800-meter strip of land on which Gibraltar's airport is situated in its no-deal Brexit contigency, with UK Deputy Ambassador to the EU Katrina Williams making a formal statement "rejecting" its language and reiterating the UK's sovereignty over the territory.

London, Williams said, "reiterates certainty over its sovereignty over Gibraltar, including the territory in which Gibraltar airport is situated," and is "adamant that, as this measure will be adopted while the UK is still a member state, the legal position of the UK should be reflected."

© CC BY-SA 3.0 / Wavering / HMS Sabre
‘Violation of Sovereignty’: Huge Spanish Warship Challenged by Royal Navy Boat in Gibraltar
Brussels earlier indicated that direct flights between the UK and EU destinations would continue for nine months in the event of a no-deal Brexit, but did not list Gibraltar airport in these plans, reflecting Spain's territorial claims to the land underneath the airport.

London "regrets" that Gibralter was not included in the EU's no-deal contingency, "and reiterates its intention that, when it comes to the future relationship with the EU, it will negotiate on behalf of the entire UK family, including its overseas territories," Williams stressed.

EU sources cited by The Guardian reportedly responded by recalling that the UK had forced Spain to "swallow" London's territorial claims on Gibraltar on pain of veto when Spain looked to join the European Economic Community, the EU's predecessor, in 1984, and said that the UK needed to realize that Brexit would have repercussions.

A British government spokesman told the newspaper that the UK disagrees "with the language inserted by Spain in relation to sovereignty over the land on which the airport is built as it does not recognize the UK's position on sovereignty."

© CC BY-SA 3.0 / Neeeiiil / A side on Photograph of HMS Talent a Royal Navy submarine
'Outrageous Behavior': Spain Shadows UK Royal Navy Nuclear Sub Near Gibraltar
Along with the status of the border between Northern Ireland and the Republic of Ireland, Gibraltar has been a major source of tension between British and European Brexit negotiators. The outpost, situated in southern Spain at the strait between the Atlantic Ocean and the Mediterranean Sea, has been governed by Britain since 1713, when Spain ceded it. However, in recent decades, Madrid has attempted to negotiate an eventual return of its sovereignty over the territory.

Among other things, Britain's looming exit from the EU on March 29 has raised concerns about whether the flow of goods and people along Gibraltar's border with Spain will be effected.

Tensions between London and Madrid escalated Thursday after a Royal Navy gunboat faced down a much larger Spanish vessel which entered British-controlled waters off Gibraltar and refused to leave for nearly two hours.