At the end of August 2018 police found the decomposing body of 17-year-old Abdi Ali, wrapped in duvet covers and bin bags, in the loft of an apartment in north London.

A couple allegedly robbed and killed a teenage drug dealer and then hid his body in the attic of their home for eight months.

Prosecutor Gareth Patterson, QC, told a jury at the Old Bailey in London Hopkins confessed to a friend of Docherty's on 27 August 2018 and said he wanted to rob another drug dealer, Sean, because he was angry he would not give him any heroin or crack cocaine.

Defendant's Friend Went to the Police

The friend, Stacie Collard, told her boyfriend and they reported it to the police two days later.

The police visited the couple's apartment in Enfield, north London, found the body and arrested Hopkins and Docherty.

Teenager Abdi Ali, whose body lay undiscovered in an Enfield loft for eight months, was stabbed and bludgeoned to death for his money by a couple who "wanted to give their children a good Christmas", the Old Bailey hears.

"She revealed that the motive had been financial, stating that she had wanted to give her children a good Christmas," Mr Patterson told the jury.

Mr Patterson said Hopkins tried to pin the blame on a drug dealer called Gaille Bola, who he knew had already been charged with murdering another man, Meshack dos Santos, who was known as Shak.

But Mr Patterson said there was no evidence Bola was involved in Ali's murder and he was simply a "likely candidate" who Hopkins falsely blamed.

Opening the case for the prosecution on Thursday, 28 February, Mr Patterson said Abdi Ali had been hit three times with a claw hammer and stabbed 11 times. Both the knife and the hammer were found hidden in the loft, along with the body.

He said the couple had three young children but were heavy users of both heroin and crack.

He said they had allowed various drug dealers to deal from their home, with the children present, on the agreement the couple would be given free drugs.

​Abdi Ali was last seen by his family on 11 December 2017, when he attended a family wedding. He was reported missing on 31 December, the eve of his 18th birthday.

The prosecution claim he was murdered on 21 December and they say the couple immediately left the capital with their children and travelled by train to the small town of Leominster, near the Welsh border.

They turned up unannounced at the home of Hopkins' aunt, Marlene, and asked to stay for Christmas. 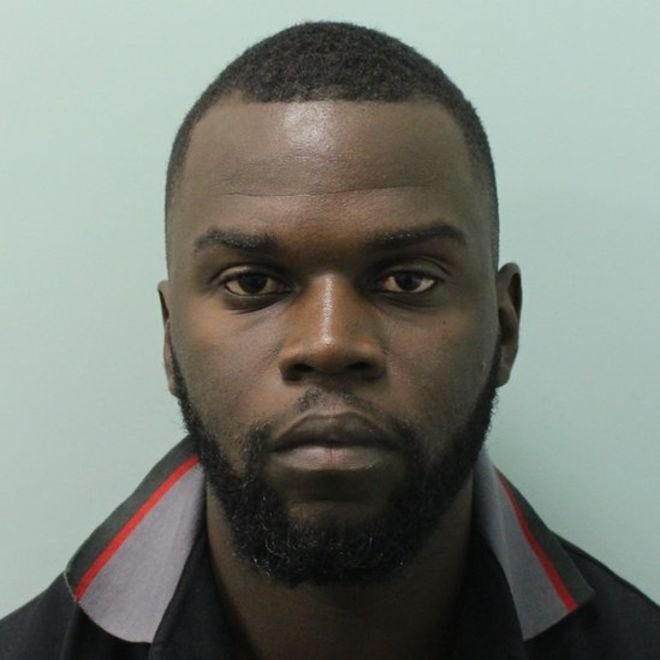 They eventually booked into a pub hotel run by his cousin and stayed there before returning to London after Christmas.

Mr Patterson said they paid for both the train and the hotel in cash.

When he was interviewed by police Hopkins denied killing Skeng (Ali).

"He said that around November or December 2017 Skeng was brought to his flat by others who he named as 'Ghost' and 'Shak' in order to sell drugs from his flat. Hopkins said he eventually permitted this on the basis that Skeng would give Hopkins and Docherty heroin and crack cocaine. He confirmed that both heroin and crack cocaine on a daily basis. He said Skeng stayed on the sofa in his flat and gave them drugs every day for about a week," Mr Patterson told the jury.

He said Bola and another man had been to his flat looking for another couple — Keith and Denise — and threatening to kill them.

"They had also been looking for Skeng in order to rob him because he was 'treading on their toes'," Mr Patterson said, quoting from Hopkins' version of events.

Mr Patterson said Hopkins appeared to be blaming Bola and the other man for killing Skeng.

He said Hopkins said when they returned to the apartment after Christmas they found it empty — Abdi had gone — and there was no sign of any commotion.

Docherty Initially Denied Knowing About Body in the Loft

But Mr Patterson said Docherty gave three different accounts during her interviews. He said she initially denied even knowing there was a body in the loft but said she believed Skeng had been killed by Bola.

These are the flats in Enfield where Abdi Ali, 17, was allegedly murdered by Gary Hopkins and Stacey Docharty. His body was hidden in a loft there for 8 months. pic.twitter.com/iQCz8RGpHS

​In her second interview she said she had known about the body but only found out about it in June when she went up into the loft to investigate after clouds of flies appeared in the flat.

She said when she asked Hopkins about it he said: "If I tell you, you will be in trouble."

"Eventually she abandoned her account and the suggestion that Gaille had been responsible. She now stated Hopkins had said that he was going to do it. She said that she told him not to do it, but that he did not want to listen….She said Hopkins came into the bedroom holding a blood-stained knife and said he had killed him," Mr Patterson said.

Docherty denies murder, attempting to pervert the course of justice and preventing a lawful and decent burial, while Hopkins denies murder but has pleaded guilty to the other two charges.

Abdi Ali's mother, accompanied by her daughters, listened to the prosecutor's statement and wept at the back of the courtroom.

The trial is due to last several weeks.