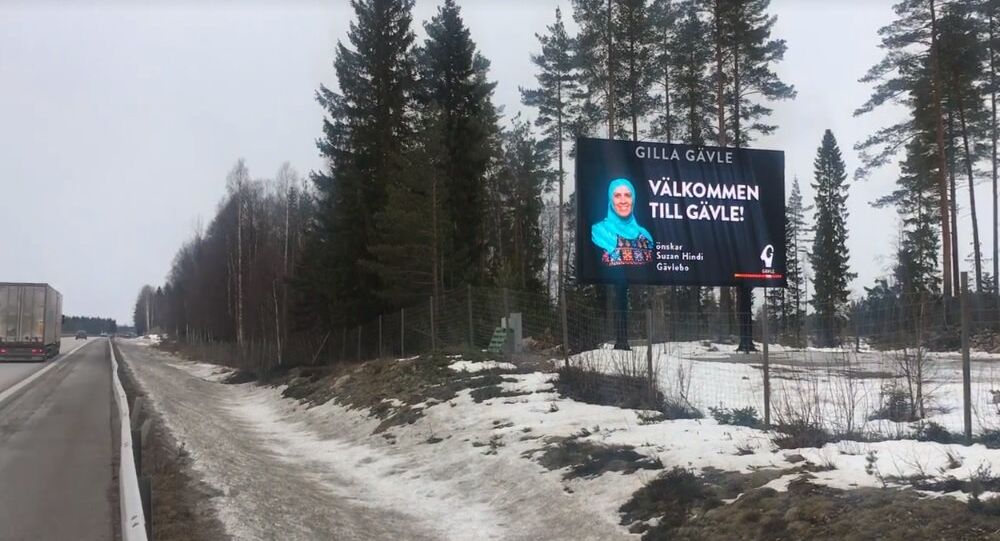 The Swedish town of Gävle's decision to place a hijab-clad Muslim woman on its welcome sign in order to 'celebrate diversity' has triggered strong reactions.

The sign is located on the E4 motorway on the outskirts of Gävle, which is located north of Stockholm, and shows different people living in the municipality to welcome incoming motorists. Hindi's hijabbed appearance, however, caused a stir, as many interpreted it as political correctness gone too far and as a dangerous sign of Sweden caving in to Islam and pandering to extremists. Others saw the hijab as a symbol of oppression that has no place in a democratic society.

Gävle MP Roger Hedlund, a member of the right-wing Sweden Democrats, was among those who opposed the sign, saying that headscarves "reduce women to a simple sex object who must cover up in order not to arouse male desire".

Vandals vented their frustration with the sign for the first time last week. The damage continued over the weekend, and then the sign stopped working altogether, Aftonbladet reported.

Others who took offence contacted the administration of the municipality. In a single day, the Gävle municipality received about 20 telephone calls and some 40 e-mails. Swedes have also been eagerly commenting on Gävle municipality's accounts in social media.

"It is partly the classic Islamophobic attitude that everything that has to do with Islam is a danger and evil. Then, there have been those who pointed out that the hijab is a symbol of women's oppression and is problematic," Gävle municipality communications manager Johan Adolfsson explained.

Adolfsson also described Gävle as a multicultural place where 120 different languages are spoken and called Hindi an "ambassador of diversity".

"The woman in the picture is one of Gävle's many Muslim women and she herself has chosen to wear the headdress hijab because she wants to and because she feels like herself in it," he explained, opining that the accusers were bolstering oppression.

The local newspaper Gefle Dagblad described 32-year-old Suzan Hindi as a brave teacher who didn't quit her job despite battling cancer. By contrast, the news outlet Samhällsnytt reported that Gävle's "new poster girl" had connections with the Gävle mosque (also known as al-Rashideen mosque) that was previously reported to be a hotbed of radical Islam. According to Samhällsnytt, Suzan's spiritual leader imam Abu Raad reportedly praised Daesh* and even tried to raise money for the terrorists.

Samhällsnytt also revealed that three more veiled women have been included in the rotation as part of the project "100 Gävle residents" run by Johan Adolfsson.

​Suzan Hindi's fellow hijabis selected to represent the city include her sister Mayson, who goes to the same mosque and is a columnist, teacher and new arrivals consultant Lelas Samakia and Somali-Swedish Ikram Yusuf, whom the municipality described as a "fashion enthusiast who is burning for the beauty of the girls in veil".

Despite the widespread negative reaction, Adolfsson pledged to continue to include Muslim women, "both with and without the veil".

Gävle's focus on diverse messaging (including LGBT, disabled and different ethnic and religious background) is in fact consistent with a handbook published by the country's Foreign Ministry which self-identifies as "feminist" and the Swedish Institute, a government institution working to promote Sweden abroad.

A 2017 Pew research study estimated the share of Muslims at 8.1 percent of Sweden's population of 10 million. The number of Muslims has skyrocketed following the recent years' migrant crisis.

Sweden has no state ban on Islamic garments, be it the hijab, the burqa or the niqab. However, individual employers may prohibit employees from wearing religious, philosophical, and political symbols during working hours. By contrast, police and firefighters are allowed to wear the hijab.

Gävle is the largest town in Gävleborg County north of Stockholm and has around 75,000 inhabitants.