"Of course, there are remaining difficulties in the process of development of our relations with Georgia. The main of them is the pro-NATO agenda of Tbilisi, the Georgian authorities’ aspirations to be as close as possible to the Euro-Atlantic structures and large-scale military exercises held on the territory of this country", Karasin, who is also the Russian ministry’s state secretary, said after his talks with the Georgian prime minister's special representative for relations with Russia, Zurab Abashidze, in Prague on Wednesday.

Moscow is convinced that these Georgia's aspirations represent the main threat for the improvement of its bilateral relations with Russia and has been communicating these concerns to the Georgian representatives at the bilateral talks, according to Karasin.

Additionally, the diplomat acknowledged the progress in the development of bilateral relations but pointed out that holding a meeting between Russian President Vladimir Putin and his Georgian counterpart Salome Zourabichvili was not addressed during the Prague negotiations.

"It is still too early to talk about the meeting between the leaders of Russia and Georgia. It should be preceded by thorough preparations. It is not yet on the agenda", the diplomat maintained. In its statement on the results of the talks, the Russian Foreign Ministry also noted that unfriendly public statements toward Russia, voiced by some Georgian high-ranking officials, were among the factors that affected the development of mutually beneficial cooperation.

Despite that, at their Prague talks, the sides acknowledged that their economy cooperation developed last year with trade having increased by 25 percent, reaching $1.35 billion. They also noted a boost in bilateral cargo traffic and are currently considering increasing the number of licenses issued for companies working in this area, according to the ministry. 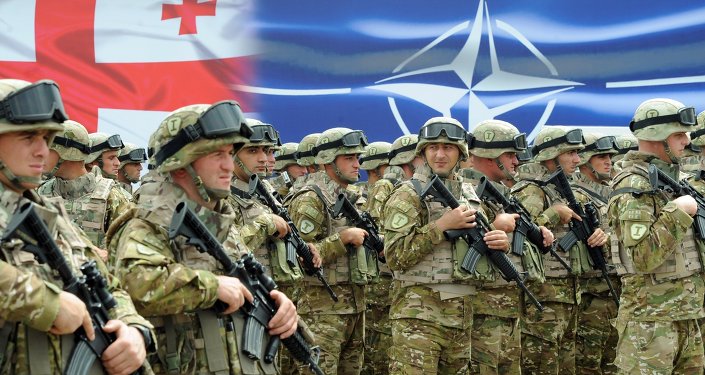 © AFP 2019 / VANO SHLAMOV
Poland Supports Georgia's Aspirations to Join NATO That 'Permanently Defends'
"As a result of the talks, the readiness to continue contacts has been reaffirmed. The next meeting [between Karasin and Abashidze] has been agreed for summer 2019", the statement pointed out.

The cooperation between Georgia and NATO began soon after the collapse of the Soviet Union when the country joined the North Atlantic Cooperation Council in 1992 and NATO's Partnership for Peace program two years later. In 2008, NATO leaders agreed that Georgia would become a NATO member provided that the country met all the requirements for this. On its way to the NATO membership, Georgia has been assisted by the NATO-Georgia Commission, established in 2008, which supported the country in its reform efforts.

Diplomatic relations between Georgia and Russia were severed in 2008, shortly after Moscow recognized the independence of Georgia’s two breakaway regions, Abkhazia and South Ossetia. Russian officials have repeatedly stated that this recognition reflects existing realities and cannot be reconsidered. The dialogue between the countries is maintained within the framework of the Geneva discussions and negotiations between Karasin and Abashidze.