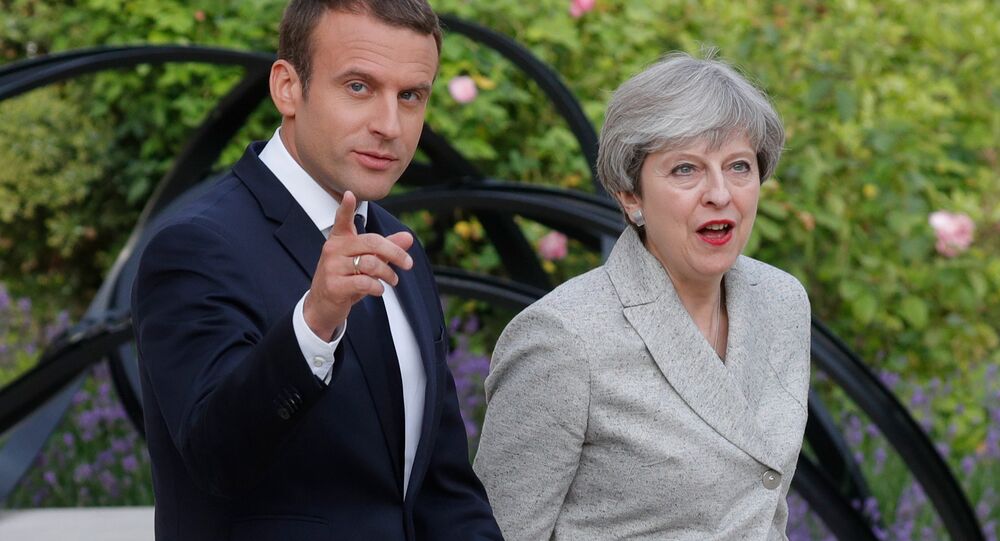 LONDON (Sputnik) – French President Emmanuel Macron's threat to block any extension of Article 50 of the Lisbon Treaty is yet another attempt to pressure UK Prime Minister Theresa May into capitulating to the EU provisions of Brexit, Steven Woolfe, independent member of the European Parliament for North West England, told Sputnik on Wednesday.

"My response to the fact that Macron has decided to try and veto is because he knows that Britain is currently being laughed at by the European Union – they're all solidifying themselves to try and force more pressure on Theresa May", the lawmaker said adding the UK prime minister is "beleaguered".

According to Woolfe, Macron is trying to pose himself as a "hard man" of the European Union on the Brexit issue.

READ MORE: 'Not Impossible That a Revised Deal Could Get Through' – Analyst on Brexit Talks

"I'm not surprised that Macron is trying to play the hard man of the EU in saying that nothing can ever be renegotiated. This is a man that criticised the Venezuelan President [Nicolas Maduro] over the weekend in attacking those who opposed his government whilst his own police were firing rubber bullets and flash bombs into the eyes of the leaders of his own opposition," the lawmaker stressed, referring to French security forces' crackdown on "yellow vest" protesters.

© REUTERS / Russell Cheyne
Scottish National Party Tables Brexit Amendment Ruling Out No-Deal Scenario
Earlier in the day, Macron said that France would vote against any possible extension of Article 50 if May faced further defeats in the UK parliament on Brexit, adding that any extra time for the renewed negotiations between London and Brussels could only come with a "clear objective" as the end goal.

On Tuesday, May said that the UK parliament would vote on a no-deal Brexit in March if the government's plan on the issue was rejected, and if a no-deal option was voted down as well, the vote on Brexit extension would be held.

© Sputnik /
Labour Declares Support for New Referendum as UK Faces "No Deal" Brexit
The United Kingdom is set to leave the European Union on 29 March. While London managed to negotiate a withdrawal deal with Brussels after months of intense talks, the UK parliament has been refusing to endorse the deal due to the controversial provision on the Irish border backstop, contributing to fears of a no-deal Brexit.

The German chancellor has said that the European Union "would not say no" to an extension demand.