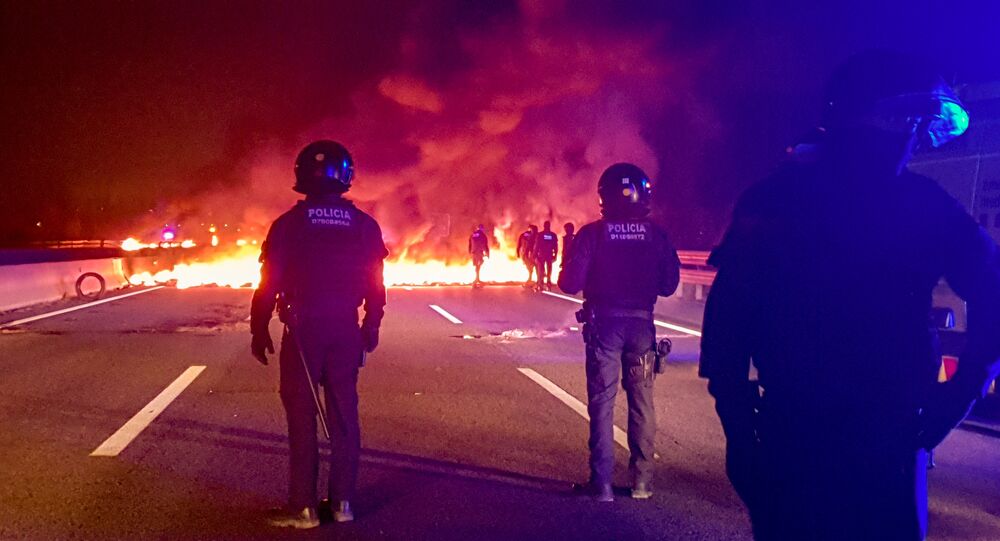 Activists poured onto the streets of Barcelona on Thursday to protest against the trial of 12 former Catalan independence leaders, which started last week in Madrid.

A one-day strike was called by the unions of pro-independence workers and students. Activists from Omnium and the Catalan National Assembly (ANC) civil groups are planning to hold a mass march this evening.

One person has been detained for resisting the police in Barcelona and one more has been arrested on the C-17 highway. Seven police officers have been injured in clashes with activists on the AP-7 highway in the province of Girona.

© REUTERS / Sergio Perez
Thousands of Protesters Take to the Streets in Madrid to Oppose Spanish PM's Catalonia Proposal (VIDEO)
According to the Government of Catalonia, at least 28 people were injured in clashes between protesters and Mossos d’Esquadra law enforcement forces in Catalonia.

There are 12 police officers and at least one journalist among those injured.

Mossos d’Esquadra told Sputnik that three people had been detained for resisting the police.

Mass protests are currently underway across the region, including in Barcelona, against the ongoing trials of Catalan politicians.

Earlier in the day, activists burned tyres and blocked a number of highways and railway tracks in the northeastern region. According to the police, they managed to reopen major roads, while some scuffles broke out with protesters.

Last week, the Supreme Court of Spain began hearing cases regarding the Catalan referendum and declaration of independence in October 2017. A total of 12 Catalan politicians are on trial, nine of whom have been charged with organizing a coup.