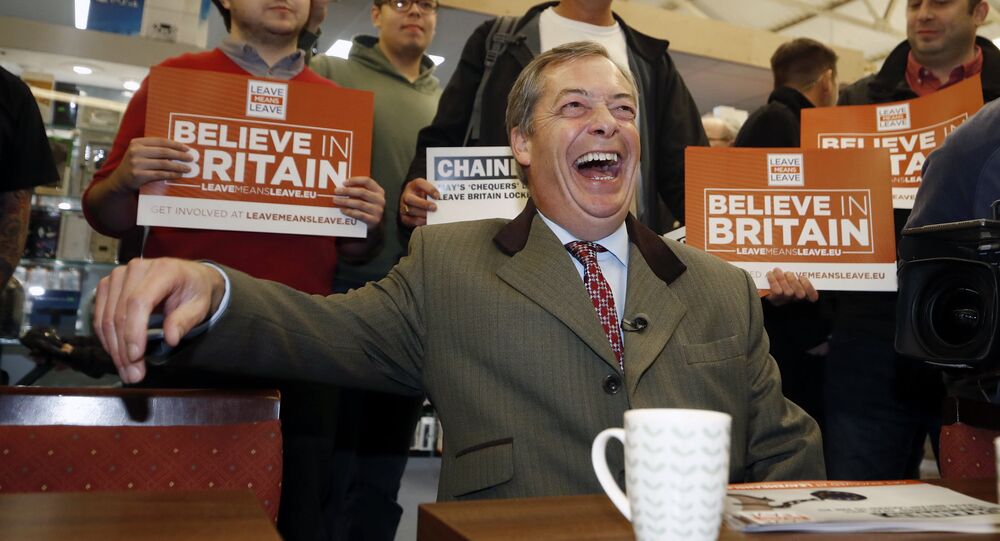 "Our politicians had better listen," said the former leader of the UK Independence Party Nigel Farage as he announced via Twitter that his latest political endeavour received mass backing and invited more Brits to sign up.

An MEP for UKIP, Farage, has confirmed that he registered the Brexit Party with the UK Electoral Commission, aiming to take action if "Brexit doesn't happen on March 29." The purpose of the party is to bring "real clarity" on the issue of Brexit, as the public "frustration is welling up" and the political elites are trying to "stop Brexit."

On Monday, former UKIP leader announced that his plan has already enlisted support of thousands, who'd registered with the new party.

Farage has previously expressed fears that the UK PM Theresa May and her government will request an extension of Article 50, delaying Britain's exit from the European bloc. The first Cabinet minister to admit an extension may be on the cars was British Foreign Secretary Jeremy Hunt.

READ MORE: UK Should Be Able to Trade With EU on Same Conditions — UKIP Founder

In this case, Farage plans to take the newly established part to battle in European Parliament elections, which will begin on 23 May 2019.

© AP Photo / Jean-Francois Badias
In this Wednesday, April 5, 2017 file photo Britain's former UKIP leader Nigel Farage, left, arrives with European Chief Negotiator of the Task Force for the Preparation and Conduct of the Negotiations with the United Kingdom under Article 50, Michel Barnier, before attending a session in Strasbourg, eastern France.

"I'm registered. If Brexit doesn't happen or respected how it should be, the Conservatives membership card is getting cut up," a commentator responded to Farage's tweet.

Another user, however, argued that "all Brexit parties need to unite under one banner," to prevent dilution of "the Brexiteers votes."

Nigel Farage has continuously criticized the Withdrawal Agreement proposed by Theresa May's government, branding it the "worst deal in history." The politician, who was at the forefront of the Leave.EU political campaign in the lead up to the 2016 referendum, hit back against what he called "Project Fear" claims on the introduction of martial law if Britain leaves with no deal.

He said that if Brexit gets delayed, he would make sure that people have "some democratic choices the can take as opposed to moving towards violence."

UK lawmakers will hear from the Prime Minister on 13 February, as she will either bring a revised deal to the House or make a statement on the state of the negotiations. A motion then will be put forward on 14 February, giving MPs a chance to vote on the PM's Brexit plans.