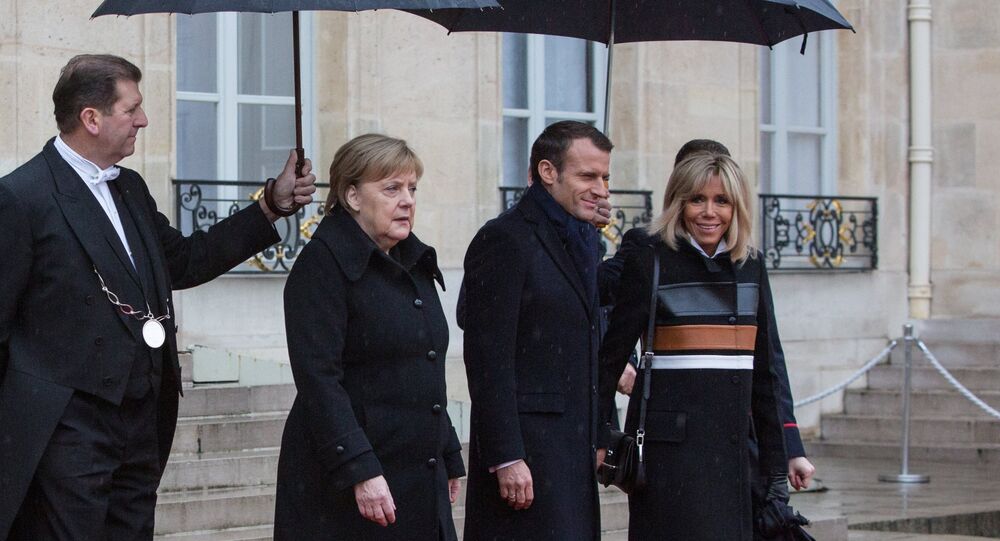 Ahead of a vote on amendments to the Gas Directive that would let the European Commission gain leverage over the Russian-European pipeline venture, France has contravened Germany and decided to back the new regulations.

Commenting on France’s plans to back the new EU regulations, possibly torpedoing international pipeline project Nord Stream 2, Russia defended the venture, saying it is beneficial for all EU countries. Kremlin spokesman Dmitry Peskov promised that Moscow intends to closely follow the discussions in Brussels on the project while continuing to work on it.

"We are certainly aware of the discussions that are taking place in the European Union on this matter. We are very closely monitoring the situation," Peskov said when asked whether disagreement within the EU could interfere with the pipeline completion.

He insisted that the Russian-European venture, being the most safe and stable route, is more expedient economically than any other delivery line. He also slammed the US position on the venture as incompatible with fair competition because Washington is forcing Europeans to buy gas at 30% higher prices.

Meanwhile, Berlin is in “constant contact” with Paris over its plans to back the new EU regulations, German government spokesman Steffen Seibert has told Reuters.

Earlier, German Chancellor Angela Merkel has refuted the main point of criticism against the international project Nord Stream 2, under which natural gas would be brought to Europe via the Baltic Sea and a hub in Germany, saying it would not make her country dependent on Russia.

“Do we become dependent on Russia due to this second gas pipeline? I say ‘no’, if we diversify at the same time", Merkel told journalists in Bratislava, where she met with the heads of states of the Visegrad Group, namely the Czech Republic, Hungary, Poland, and Slovakia.

She also stressed that Ukraine must remain a transit country, dispelling fears that the new gas route, bypassing it, impact the EU's energy independence.

Merkel defended the Russian-European venture after it became known that France would back the draft amendments to the European Gas Directive, which Berlin has long opposed and pressured other EU countries to block.

“France intends to support the adoption of such a directive. Work is continuing with our partners, in particular with Germany, on possible changes to the text", French foreign ministry spokeswoman Agnes von der Muhll stated.

It confirmed earlier reports by the German outlet Sueddeutsche Zeitung, saying that Paris fears more dependency on Russia and "strategic problems" in the strained relationship between Brussels and Moscow.

If adopted, the new regulations would give the European Commission leverage over Nord Stream 2. They extend EU energy rules to gas pipelines from third countries to Europe, in particular, the Commission could gain the right to demand a separation of gas sales and pipeline operating activities, as well as third-party access to a pipeline. It is believed that the amendments in question mainly target Nord Stream 2, funded by the Russian gas supplier Gazprom, and could even hamper its completion.

Reuters has reported, citing an unnamed EU source, that France’s vote would be decisive and leave Germany short of a blocking minority while the Union remains divided on the matter. While Berlin, peddling the economic benefits of the project, has secured the support of the Netherlands, Belgium, Austria, Greece and Cyprus, opposition to the venture has been expressed by Poland and the Baltic countries, who have raised concerns over the alleged danger of Europe becoming dependent on Russia and the subsequently diminished transit role of Ukraine.

Nord Stream 2 is a joint venture of Russian gas giant Gazprom and five European companies. It aims to deliver 55 billion cubic metres (1.9 trillion cubic feet) of Russian natural gas annually to the European Union. Apart from Eastern European countries and Ukraine, Washington has also been strongly opposing the project. Recently, US Ambassador to Berlin Richard Grenell warned German companies against participating in the project threatening them with "significant sanctions risks".

Russian President Vladimir Putin, for his part, has voiced the belief that US President Donald Trump is seeking to force Russia out of the European energy market so that the United States can sell more liquefied natural gas to Europe. Moscow has also reiterated that the pipeline is a purely commercial project.