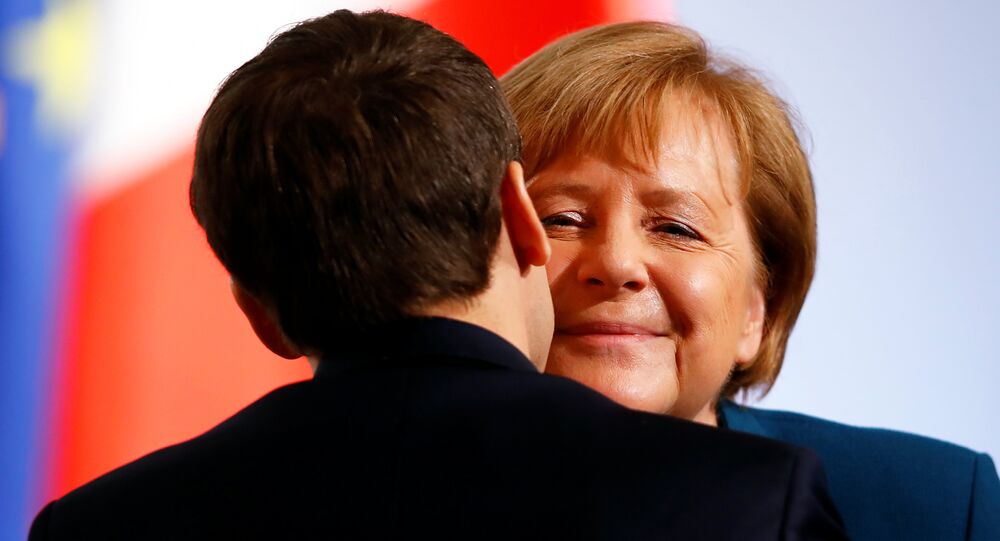 The EU is to hold a vote on a revision of the Gas Directive that would let the European Commission gain leverage over the Russian-European gas pipeline project. Germany has resisted Brussels's attempt to revise the regulations and counted on France’s support amid their growing cooperation.

One of the EU's pillars and Germany’s closest allies, France, has voiced opposition to Berlin-supported Nord Stream 2 ahead of the EU vote, which would impact the future the Russian-European pipeline project under which natural gas would be brought to Europe via the Baltic Sea and a hub in Germany.The French Foreign Ministry has confirmed earlier reports by the German outlet Sueddeutsche Zeitung, saying that Paris will support the draft amendments to the EU Gas Directive.

Hot on the heels of the announcement by the French government, Süddeutsche Zeitung also reported that President Emmanuel Macron has surprisingly cancelled his participation at the Munich Security Conference. Thus, his joint appearance with Chancellor Angela Merkel has been cancelled. Both leaders were slated to speak to participants of the internationally esteemed security conference in Munich on 9 February, on the second day of the conference. The cancellation was explained as being due to schedule difficulties.

The German newspaper reported on 6 February that Paris fears more dependency on Russia and "strategic problems" in the strained relationship between Brussels and Moscow.

“We do not want to increase our dependency on Russia and thereby harm the interests of EU countries like Poland and Slovakia",  said Paris, according to the outlet.

The vote, concerning the draft amendments to the EU Gas Directive, is slated to be held on 8 February. According to SZ, Germany, which is against the new regulation, has resisted attempts to change the EU rules to let the European Commission gain leverage over Nord Stream 2. In November 2017, the EC proposed extending EU energy rules to gas pipelines from third countries to Europe. In particular, the Commission seeks the right to demand a separation of gas sales and pipeline operating activities, as well as third-party access to a pipeline. It is believed that the amendments in question mainly target Nord Stream 2, funded by the Russian gas supplier Gazprom.

Sueddeutsche Zeitung points out that in order to prevent the pipeline from being blocked and to build a minority against the revision, Berlin counted on Paris along with the Netherlands, Belgium, Austria, Greece and Cyprus, whose support it has already secured. But that's not enough. However, it would be hard for Germany to ensure a favourable result without the French, according to the outlet.

The newspaper emphasised that Paris is aware that this would lead to a dispute between the two key EU partners, whose cooperation is esential for Europe. The sources from French government circles told the newspaper that they are standing by their decision, and only the personal intervention of Emmanuel Macron, who has repeatedly brought up the importance of Berlin-Paris cooperation, could change this position. France's European Affairs Ministry has not commented on the issue.

Nord Stream 2 is a joint venture of Russian gas giant Gazprom and five European companies. It aims to deliver 55 billion cubic metres (1.9 trillion cubic feet) of Russian natural gas annually to the European Union. The pipeline project has been welcomed by some countries in Europe, including Austria, but opposed by others. Besides France, opposition has been expressed by Poland and the Baltic countries, who've raised concerns over the alleged danger of Europe becoming dependent on Russia and the subsequently diminished transit role of Ukraine.

Washington has also been strongly opposing the project. Recently, US Ambassador to Berlin Richard Grenell warned German companies against participating in the project threatening them with "significant sanctions risks".

Russian President Vladimir Putin, for his part, has voiced the belief that US President Donald Trump is seeking to force Russia out of the European energy market so that the United States can sell more liquefied natural gas to Europe. Moscow has also reiterated that the pipeline is a purely commercial project.