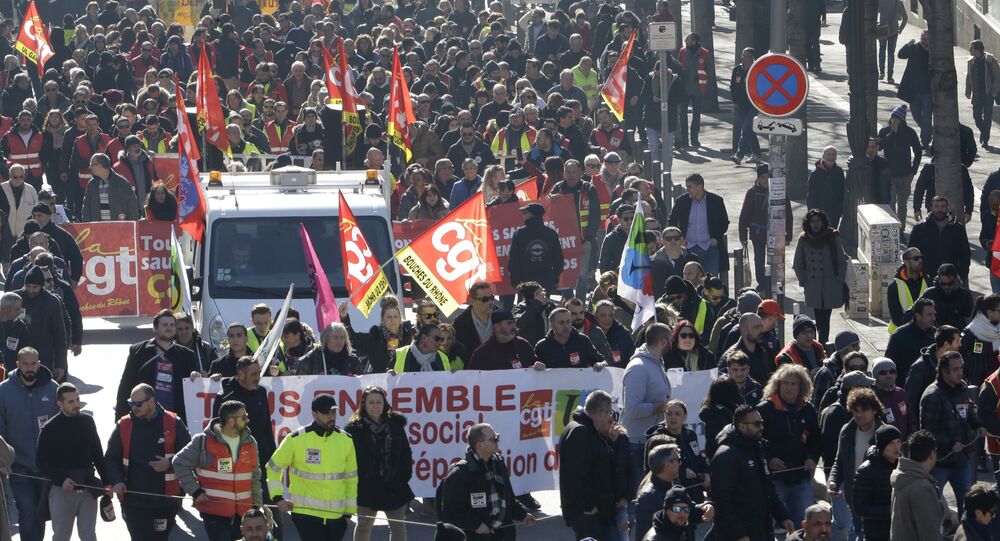 French unions are holding a rally over a minimum wage in the city of Paris, which has also seen 12 weeks of violent "Yellow Vests" protests.

According to a Sputnik correspondent, protesters clashed with police after they reached Place de la Concorde square, close to the Louvre Museum. A group of protesters provoked police by throwing various objects at them and forcing the law enforcement officers to respond with tear gas.

Yellow vest protesters joined the mass manifestation organized in Paris by the General Confederation of Labour (CGT), the largest trade union center in the country, a Sputnik correspondent reported Tuesday.

This is the first joint demonstration of yellow vests and trade unions in Paris.

The participants of the rally are demanding a 20 percent increase of the minimum wage, equal wages for women and men, tax reform, development of public services, and fair environmental reforms.

According to a General Confederation of Labour representative, some 30, 000 people have gathered at the rally, while police report about 18,000 protesters being present. A yellow vest protester told Sputnik that the sides shared 90 percent of demands, and there was no reason not to hold joint rallies.

The wave of the so-called yellow vest rallies, which have been marked by violence, clashes with law enforcement agents and public unrest, started in France in mid-November.

While the government ultimately abandoned plans to raise fuel taxes, which triggered the rallies in the first place, and introduced other measures to improve the country's socioeconomic situation, the protests have continued and morphed in wider outcry against French President Emmanuel Macron's economic policies and high living costs.