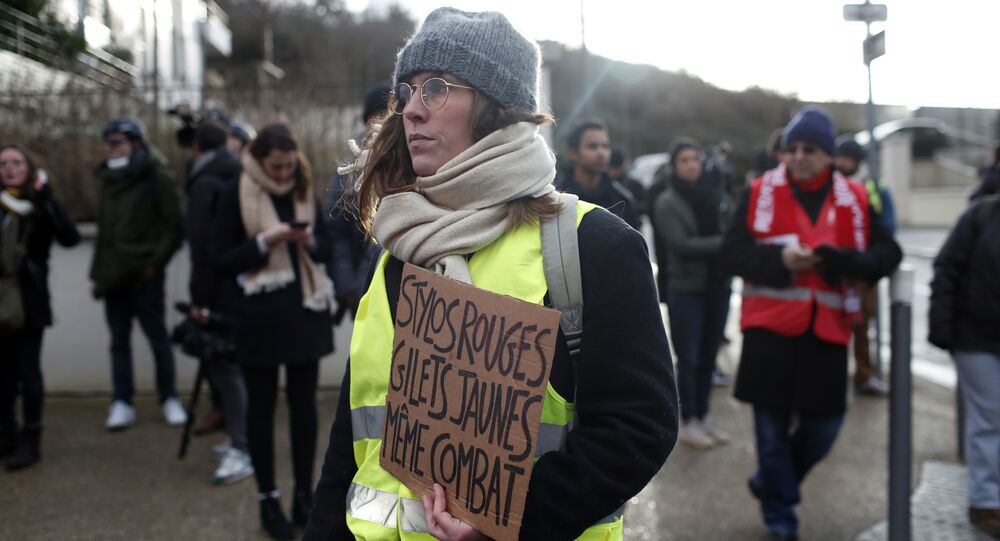 The enormous wave of anti-government protests in France is not limited to the Yellow Vests, as now another French movement, known as the ‘Red Pens,’ fueled by ongoing economic injustice toward teachers, is now on the rise in the wealthy European nation.

On December 12, the ‘Stylos Rouges' (Red Pens) movement was established to detail the struggles French teachers face to simply do their jobs. It's popularity swelled as within three weeks, some 44,000 had become members of the group.

According to the Stylos Rouge Facebook page, now showing over 67,000 members, the teachers are not associated with political parties or unions. The movement demands better pay and smaller classroom sizes. Members plan to achieve their objectives through — like the Yellow Vests — civil disobedience and strikes, according to social media posts.

According to professor Nicolas Glière, a self-described Stylos Rouge member, the education ministry has not addressed teacher's concerns despite many promises.

"We have lost 40 percent of our purchasing power since 1983. We demand the re-evaluation of the salary that we should have, that is to say, a pay rise of 40 percent — which would merely be returning our salaries to normal," Glière told France 24.

A 2017 report by the Organization for Economic Co-operation and Development (OECD) reveals that teacher salaries in France decreased by some 10 percent between 2000-2015.

In addition, figures released in 2015 by France's education ministry revealed that the average gross monthly salary of teachers is just 2,475 euros ($2,836). This figure also applies to teachers whether they have been working for forty years or forty days.

"The lack of resources is glaring," Glière stated, commenting on large class sizes. "Classes with thirty, thirty-five, thirty-eight students — and at the same time we are being asked to help students who are having trouble — it's impossible."

"We want respect and a decent salary that reflects the importance of our contribution to society," he pointed out, cited by France24.com.

The country's education ministry gives the appearance of seeking to silence teachers and "keep us from explaining what is really going on," Glière said, adding, however, that "many, many fellow teachers are at the breaking point.

According to Dominique Dubarry, an earth science professor in southern Paris and also a Stylos Rouge member, teacher recruitment in the country is extremely difficult under current conditions.

"I'm the third generation of teachers in my family, and none of my kids wants to be a teacher. They have seen me all too often with the papers that follow me everywhere, the classes I must prepare, the all-nighters," she told Europe 1.

"And yet, they also see that I am passionate about my work."

"I've been recommending my job for years," Dubarry added. "But this year, for the first time, I say, 'Think carefully before you become a teacher.'"

In addition to the Red Pens, Yellow Vests rallies — named after the reflective garment French drivers are required to have in their vehicles — began in mid-November.

While the French government scrapped a planned fuel tax hike, which had initially sparked the Yellow Vests protests, the movement has now spread into a much broader movement against bad government policies and rising living costs, Sputnik previously reported. Many of the rallies have been marked by violent clashes between protesters and police.