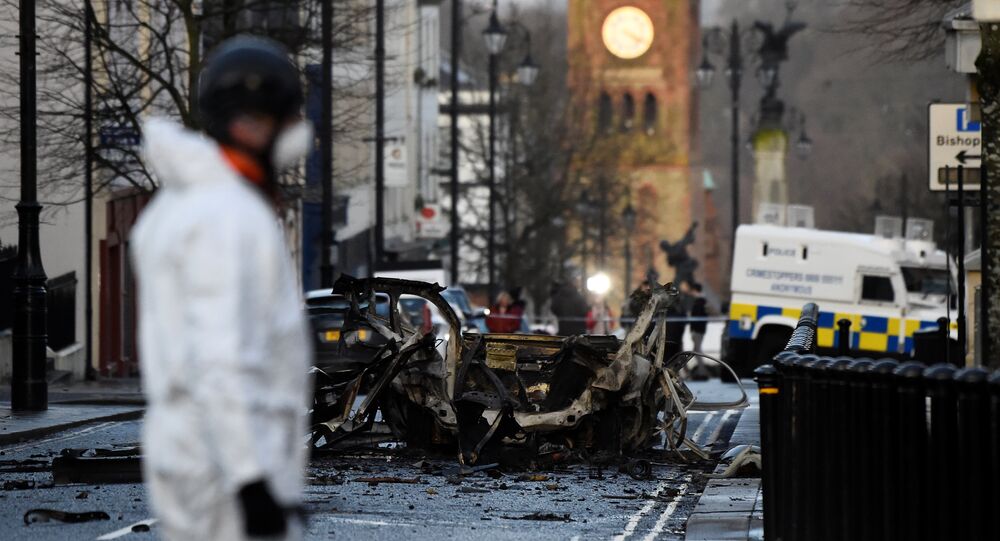 A spate of violence, including a car bombing, plus the discovery of an illegal cache of weapons on the border between Northern Ireland and the Republic of Ireland, have raised fears that a hard Brexit agreement could restart old conflicts and threaten the 1998 Good Friday peace treaty between Republicans and Loyalists.

Former presidential candidate and National Rally party president Marine Le Pen has accused the European Union of trying to unleash a civil war in Ireland through the terms of its Brexit deal with the UK.

"The EU is, in fact, trying to unleash a civil war in Ireland in some form…to renew the conflict which existed in Ireland," Le Pen said, speaking to panelists in a broadcast on Brexit on BFM TV on Sunday.

The EU's goal, according to the politician, is to make Brexit "as painful as possible" in order to discourage other countries from "the "bad idea'" of wanting to leave the European Union."

"The 'divorce' may be very painful, but much more so for the EU than for the UK," Le Pen added.

© AP Photo / Kirsty Wigglesworth
Two People Injured in Paramilitary-Style Shootings in Northern Ireland - Reports (PHOTOS)
Last month, a car bombing in Londonderry, Northern Ireland put the city on lockdown, with a group calling itself the 'New IRA' claiming responsibility and warning people not to "collaborate with the British." The attack prompted the UK's MI5 intelligence agency to deploy hundreds of agents on a massive anti-terrorist operation, according to UK media. Last week, two people were also wounded in separate paramilitary-style shootings in Londonderry. Also last week, police discovered an illegal arms cache in the Cooley Peninsula near the Irish Republic's border with Northern Ireland.

In an article published in The Telegraph on Sunday, British Prime Minister Theresa May signalled her readiness to return to negotiations with Brussels to "battle for Britain," and insisted that her goals include a bid to ensure that "there is no hard border between Northern Ireland and the Republic of Ireland."

© REUTERS / Hannah McKay
May Vows to 'Battle for Britain and N Ireland' in Brussels to Avoid Hard Border
The recent spate of violence has sparked fears that militants could return Northern Ireland to a situation akin to 'The Troubles', a 30-year period of fighting between Catholic Republicans and Protestant Unionists, which lasted until the signing of a ceasefire in 1994 and a peace treaty known as the Good Friday Agreement in 1998. A hard border, something that May has repeatedly promised to avoid, would be a violation of the peace agreement. The border issue has proven to be a major obstacle in Brexit talks, with Brussels warning that Brexit would automatically cause a hard border if the UK left the EU without a withdrawal agreement. Britain's scheduled exit date from the bloc is scheduled for March 29.
...
Reddit
Google+
Blogger
Pinterest
StumbleUpon
Telegram
WhatsApp
399