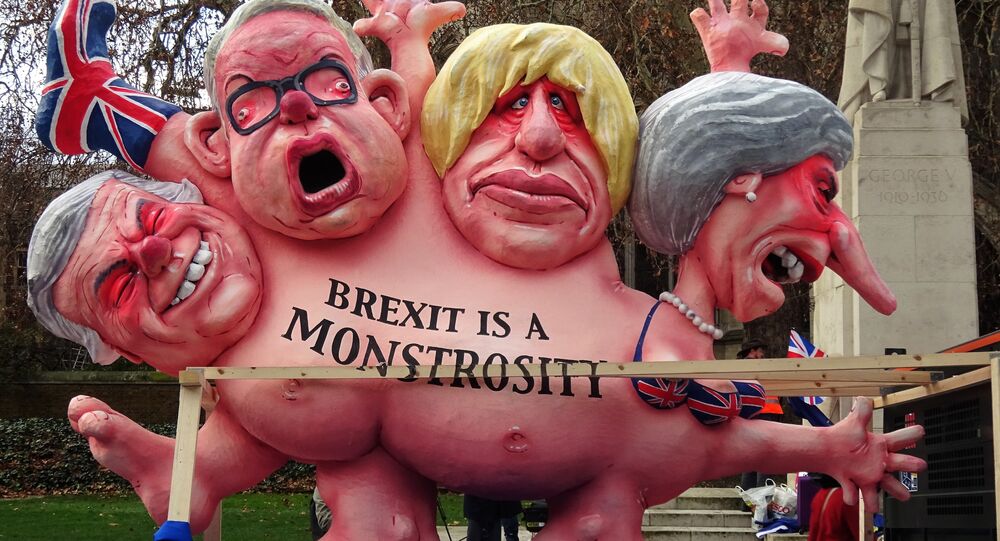 Finally a Solution to Brexit! German Economists Know How to Break the Deadlock

While both parties in the ongoing Brexit negotiations have refused so far to let go of their ‘red lines' and the extension of Article 50 seems an unlikely prospect, a new model for the EU-UK relationship has been set forward.

A group of German economists have argued that creation of a new form of partnership — specifically a newly created European Customs Association (ECA) between Britain and the EU — would break the Brexit deadlock and successfully steer them away from the no-deal scenario.

'Hard Brexit ahead: breaking the deadlock' paper suggested a "politically feasible approach" that would see creation of a space with common external trade policy, where Britain would be a full and active participants as opposed to a rule-taker.

This is an agreement which links the European Customs Union (as it currently exists) to the customs territory of the UK, creating a space with a common external trade policy and giving the UK full and active participation instead of merely being a rule-taker. This minimizes the risk of a hard border between Northern Ireland and the Republic of Ireland and is economically advantageous for both the EU and the UK.

"Issues beyond those covered by the ECA, i.e. policy areas other than trade in goods, should be dealt with in the Withdrawal Agreement as already agreed. The ECA should 4 cover areas related to trade in goods that are currently falling under the exclusive competence of the EU in Brussels. The permanent nature of the ECA does away with the need for a backstop," German economists argued.

However, the model would require sacrifices on both sides of the Channel. Namely, Westminster would at least partially, forego trade policy autonomy and accept a dispute settlement mechanism related to the ECA. Brussels would have to relax its "four freedoms" dogma, allowing Britain to participate in product market integration but allowing London to make own decisions on the freedom of movement of people.

The benefits reaped by both sides would include:

The outlined vision would certainly trigger objection on the part of hardcore Brexiteers within the UK Parliament who argue that complete independence from the EU states is ultimately what the British public voted for in the 2016 referendum.

READ MORE: Theresa May's 'Spartans' or How the Conservative MPs Will Vote on Her Leadership

Even more lenient Conservative MPs could point out that inclusion of Turkey in this new form of economic partnership is not acceptable for Britain, whose leadership said on numerous occasions it was confident in independently securing Free-Trade Agreements (FTA) with third countries that would benefit the UK first and foremost.

READ MORE: 'Britain Going to Have to Look After Its Own Interests' — US-UK Relations Pundit

Turkey hasn't been in an advantageous position when it comes to its trade relationship with the EU bloc. Recognized by British lawmakers as "almost unbelievably asymmetrical," the shortcomings of the customs union à la Turque were also outlined in the ‘Hard Brexit ahead' report.

"Turkey is obliged to align its trade policies to EU trade policies, as a customs union of course requires a common external tariff (CET). Specifically, whenever the EU signs a free trade agreement with any third country, Turkey is required to adopt all tariff reductions against this third country as well. In short, Turkey is a rule-taker," the economists explained.

READ MORE: 'Eating All 3 Cakes': UK's EU Customs Union Mess and Why Turkey Setup is a No Go

Various forms of economic integration, such Turkey-EU union, are far from being a novelty in international cooperation, even less so in European Union's agreements with its peripheral neighbours.

"Why not placing ECA + bilateral agreements (United Kingdom) in this row?" the economists asked.

They argued that the proposed European Customs Association between UK and the member states of the EU is theoretically convincing. What stands in the way is the "critical issue of political feasibility."

© AFP 2021 / Tolga Akmen
An anti-Brexit activist wears a hat covered in badges reading "Brexit: Not going well is it?" as she demonstrates opposite the Houses of Parliament in London on January 29, 2019.

In other words, it is unclear and quite concerning as the clock is running down, whether London and Brussels will ultimately give up their red lines and their ultimatums in order to prevent an EU member crashing out from the bloc for the first time in history and without a deal on its hands.

'Eating All 3 Cakes': UK's EU Customs Union Mess and Why Turkey Setup is a No Go