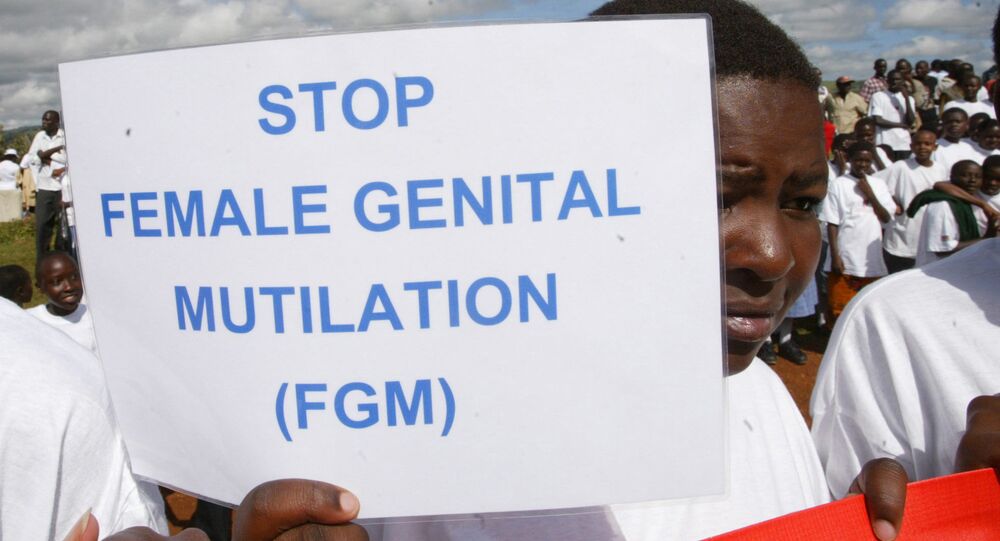 The three-year-old girl was rushed to Whipps Cross Hospital in Leytonstone on 28 August, 2017, but doctors and nurses did not believe her mother's story that she had fallen on a cupboard door while looking for biscuits in the kitchen.

Police were called and the child was interviewed three times by social workers.

In the first two interviews she insisted she had fallen over in the kitchen "while trying to get some biscuits" but there was no evidence to back up this version of events and no blood on the cupboard door.

Eventually, in December 2017, she said an "old lady" who she described as a "witch" had cut her private parts, which she referred to her as her "poom-poom" — while her mother held her down.

© Photo : Metropolitan Police
The girl's mother tried to claim she had injured herself falling on this cupboard door while looking for biscuits but there was no blood on it

At the trial Mrs. Justice Whipple said there was a "degree of confusion" in the girl's statements but she reminded the jury she had only been three years old at the time and both legal teams had decided not to make her give evidence at the trial.

The pair denied causing the injuries but on Friday, 1 February, a jury at the Old Bailey in London found the mother — who cannot be named for legal reasons — guilty of causing FGM and failing to protect her from the risk of genital mutilation. She faces up to 14 years in jail.

Woman who helped perform FGM on her three-year-old daughter becomes the first person to be convicted of the offence since legislation was introduced in 1985. Her husband was cleared #FGM

"This is the first successful prosecution for FGM in the UK and it reinforces our commitment to work with health, education, social care, affected communities and others to do more. I ask anyone with concerns or information to share it with us. We will treat each individual case sensitively and confidentially," said the National Police Chiefs' Council lead for FGM, Commander Ivan Balhatchet.

​Detective Chief Inspector Ian Baker, of the Metropolitan Police's Child Abuse and Sexual Offences Command, said they discovered a number of items at the couple's home in east London which suggested the FGM was linked to witchcraft.

"There was evidence of witchcraft at the house, including two cows' tongues with nails in them and 40 limes with messages inside them, which were in the freezer and contained witchcraft spells against a number of named people," Det. Chief Insp. Baker told reporters.

© Photo : Metropolitan Police
Police found this cow's tongue - wrapped up and with several nails hammered through it - at the woman's home. It was linked to witchcraft

"Two cow tongues were bound in wire with nails and a small blunt knife also embedded in them, 40 limes were found and other fruit which when opened contained pieces of paper with names on them," prosecutor, Caroline Carberry QC told the jury.

"The names embedded included both police officers involved in the investigation of the case, the social worker, her own son and the then director of public prosecutions (Alison Saunders). These people were to 'shut up' and 'freeze their mouths," said Ms. Carberry.

Lynette Woodrow, a Deputy Chief Crown Prosecutor, said the woman was initially bailed and the items were found at her home when the couple were arrested and charged.

"We commissioned a report from a witchcraft expert and they confirmed these spells do exist. If you put a name in a lime or a cow's tongue it is designed to silence them, to ‘shut their mouth or shut up'," Ms. Woodrow told reporters.

We could have saved a 3 year from FGM if people had listened to women like me who grow up here and know the realities of FGM. But too many wanted to play PC and put sick peoples idea of culture above that of kids. I am not celebrating the conviction because I know the pain of FGM

"Female genital mutilation has an appalling physical and emotional impact on victims that usually lasts their entire life. We can only imagine how much pain this vulnerable young girl suffered and how terrified she was," said Ms. Woodrow. ​

Det. Chief Insp. Baker said they made enquiries and were unable to ascertain whether the "witch" existed or whether the girl had actually been injured by her mother.

"If there are cutters and out there and you know they are you must tell us so we can do something about it," Det. Insp. Davis said.

© Photo : Metropolitan Police
One of the notes - part of a witchcraft spell - which were found in frozen limes in the woman's freezer

Around 5,000 women and girls in Britain are believed to have suffered FGM, but the majority underwent the procedure before they came to the UK.

Globally around 500,000 women have suffered FGM.

Detective Inspector Allen Davis, the Met's FGM lead, said the practice was found in many communities and cultures and the reasons for it being perpetrated were many and varied.

"It depends on which community you are dealing with. It will vary between countries and communities. There are different ages, different types of FGM and different rationales behind it. Some communities are rejecting it faster than other," Det. Insp. Davis told reporters.

Uganda — the woman's country of origin — is mentioned on the website 28 Too Many, which says among the reasons given for FGM are "preservation of virginity and chastity", "family expectations and to maintain family honour", "cleanliness/hygiene" or "preparation of girls for womanhood and to enable them to have a good marriage".

But said none of those reasons applied to the case which has led to the first UK conviction, which was intrinsically linked to witchcraft.

Mother who helped perform FGM on her 3year old becomes the first person to be convicted of the offence. Further details on tonight's show pic.twitter.com/fMcirUk7fM

​"FGM in some cases will have a link with witchcraft belief, a way of understanding the world and a way of perceiving evil in which children are sometimes vulnerable," said Det. Insp. Davis.

He said children were sometimes seen as the cause of bad events and witchcraft spells were used.

"We can't lose sight that this case was about a very young girl who was subjected to horrific abuse….thankfully she has made a good recovery and has been placed with another family," he told reporters.

since 1985 FGM has been a criminal offence and it’s been illegal for a UK citzen to mutilate abroad since 2003 and this is the first time someone is being charged with it? this is a violation of human rights and disgusting child/female abuse plain and simple. https://t.co/6uiTE7fG48

​Although FGM has been a crime under British law since 1985, this is the first successful prosecution — three previous cases have ended in acquittals.

Det. Insp. Davis said it was often difficult to persuade a child to give evidence against their parents.

"Many victims of honour-based abuse just want to feel safe and they often love their mums and don't want them to go to jail. They are often closed communities and it's a real challenge for people to stand up in those communities and say what is going on," Det. Insp. Davis said.

The woman, who sobbed in the dock after being found guilty, will be sentenced on 8 March and has been warned to expect a "lengthy" jail term.

The Mayor of London, Sadiq Khan, said the conviction was sending a clear message to those who would perpetrate this "barbaric act."

"Every woman and girl should be safe and feel safe wherever they are in London, and we will continue our fight to end FGM with every power we have," said Mr. Khan.