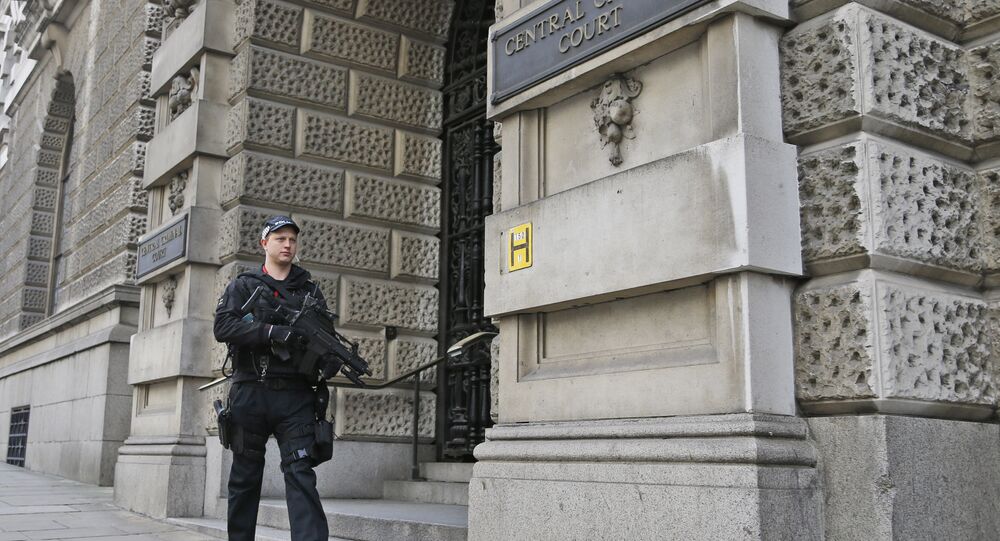 Plane Crashes, Murders and Child Abuse: A Day in the Life of UK's Busiest Court

The Old Bailey - officially known as the Central Criminal Court - in London is the most famous court in Britain and has played host to numerous infamous murder trials over the years. A Sputnik reporter spent the day there, dipping in and out of various trials.

Serial killers like the Yorkshire Ripper, John Christie and Dr. Crippen have all faced trial at the Old Bailey, which has also been the stage for historic drama such as former Liberal Party leader Jeremy Thorpe being acquitted of attempted murder in the 1970s and author and former Conservative Party chairman Jeffrey Archer being convicted of perjury.

In the 1970s and 1980s dozens of Provisional IRA terrorists were put on trial there and the building was also bombed by the Provos.

More recently Islamist lone wolves and al-Qaeda or Daesh sympathisers have been tried there — including Britain's longest ever trial, for Operation Crevice — and last year it also hosted the London Bridge terror attack inquest.

There are 18 courtrooms on four floors — ranging from the large and baroque Court 1 (which has terrible acoustics) to tiny Court 18 in the basement.

In Court 8 the jury was made to wait as the barristers discussed various legal points outside of their earshot but eventually, just after 11am, the judge, Mr. Justice Edis arrived, called the court to order (British judges do not use gavels) and called the next witness.

Andrew Hill, 54, a pilot, is on trial in Court 8 for manslaughter, accused of causing the deaths of 11 people who died when the Hawker Hunter jet he was flying ploughed into the A27 dual carriageway during an aerobatic display at Shoreham airshow in Sussex in August 2015.

Hill, who miraculously survived the crash, has pleaded not guilty and claims he lost unconsciousness while carrying out a spectacular manouevre.

On Thursday expert witness Jonathan Whaley, a former Fleet Air Arm pilot who has flown more than 1,000 hours in Hunter jets, was called by the prosecution and proceeded to give the jury a detailed lesson in aeronautics.

Mr. Whaley, who joined the Royal Navy in 1955 and said he had flown everything from Spitfires to MIG jets, was well into his 70s but he gave his evidence in a concise and authoritative manner, belying his experience as a flying instructor and trainer.

He explained to he jury — who are laymen, with no technical expertise — the different axes on which a plane flies and the difference between roll, pitch and yaw.

Mr. Whaley then explained how elevators, flaps, slats, ailerons and airbrakes can be used to give a plane extra lift, change its direction or slow it down.

The jury were shown videos of basic aeronautics and Mr. Whaley explained how the Civil Aviation Authority governed airshows and aerobatic displays.

"The worst case is an on-crowd wind which is trying to move you towards the crowd," Mr. Whaley said at one point.

He used a scale model of the Hunter jet which crashed at Shoreham to explain how a pilot would perform a barrel roll, and explained that it was always advised — but not mandatory — to come out of the manouevre steering away from the crowd of spectators, just in case the plane goes out of control.

Legal orders slapped on the proceedings in Court 6 mean that neither defendant can be identified by the press.

All we can report is that one defendant is a 37-year-old Ugandan woman and the other is a Ghanaian man, aged 43.

The trial was drawing to a close and the judge, Mrs. Justice Whipple, was going through the evidence in her "summing up".

She said the little girl was taken to hospital on August 28, 2017 and subsequently gave three separate police statements.

In the first two she insisted she had fallen over in the kitchen "while trying to get some biscuits" and had injured her private parts on a metal object.

But Judge Whipple said in her third statement in December 2017 she said an old woman — referred to as a "witch" — cut her private parts as the defendants held her down.

Judge Whipple said there was a "degree of confusion" in the girl's statements but she reminded the jury she had only been three years old at the time and both legal teams had decided not to make her give evidence at the trial.

The prosecution was finishing its case against Kenneth Umezie in Court 12.

Umezie denies murdering Sidique Kamara, 23, who was stabbed to death in Camberwell on 1 August 2018.

Kamara was better known as Incognito, a rapper and member of the drill group Moscow 17.

But his music has not so far come up during Umezie's trial.

Junior prosecution counsel, Catherine Pattison, was reading out to the jury some of the last pieces of the evidential jigsaw before the defence case starts on Friday 1 February.

She said Kamara's DNA was found on the murder weapon, a lock-knife, and Umezie's DNA profile was found on the underside of the knife. She said the chances of the DNA not belonging to them were both one in a billion.

Ms. Pattinson also detailed the 360 CCTV images taken on the streets of Camberwell leading up to the incident as well as mobile phone evidence.

She said Umezie had been arrested after attending King's College Hospital in London for treatment to his own stab wounds. He claimed unknown individuals had stolen his Cartier watch but gave "no comment" throughout his police interviews before being charged on 7 August 2018.

All You Ever Wanted to Know About Gunshot Residue

Sometimes a jury will be unable to reach a verdict and an individual will face a retrial. Such is the case with Obina Ezeoke, whose third trial is underway in Court 11.

Ezeoke, 26, denies murdering Annie Ekofo, 53, and her nephew Bervil in their apartment in East Finchley, North London in September 2016.

The pair were innocent victims of mistaken identity and the real target was Mrs. Ekofo's son, Ryan Efey, who was involved in a long-running feud with Ezeoke and his friends.

The prosecution is drawing to a close and on Thursday one of the last witnesses was a forensics expert, specialising in gunshot residue — known as GSR.

Prosecutor, Mark Heywood QC, took her step by step through the evidence.

She was asked how long GSR normally stayed on a surface.

She said it would normally stay on hands for two to four hours, on someone's hair for up to 12 hours and on their clothes for around 24 hours.

The witness then described the GSR she found on the driver's seat, headrest, door, armrest, seatbelt and handbrake in a black Vauxhall Meriva which was allegedly the killer's getaway car.

Ezeoke has admitted renting the Meriva, on previous occasions but denied he was in it on the night of the murder.

A verdict is expected in the middle of February.

Detectives Accused of Being 'Lazy'

Downstairs, in Court 11, two officers from Essex Police were on trial accused of three counts misconduct in public office between 2011 and 2014.

Detective Constable Sharon Patterson, 49, and Lee Pollard, 47, allegedly undermined several child abuse investigations by their "laziness" and a "cynical disdain" for the accusers. They deny the charges.

A detective sergeant was giving evidence about the police procedures involved in investigating child sex abuse.

He was asked to explain the difference between an NG3, an NG5 and an NG6 — different digital documents which are generated as part of the investigation and designed to help senior officers and the Crown Prosecution Service to keep tabs on how each case is progressing.

The detective sergeant explained what a "joint Section 47" investigation was (one that is carried out by the police and social workers and refers to a section of the Children's Act) and went into detail about when he joined Essex Police and when he went to work in Colchester, on the same team as Patterson and Pollard.

None of it was not thrilling or dramatic evidence, but that is the reality of life.

Most people in Britain only see criminal trials through the lens of Hollywood or in UK TV soap operas like Coronation Street.

In reality there is a lot of waiting around, a lot of circumstantial evidence, occasionally hours of dull but detailed mobile phone cellsiting or forensic evidence.

The trial of Pollard and Patterson continues.