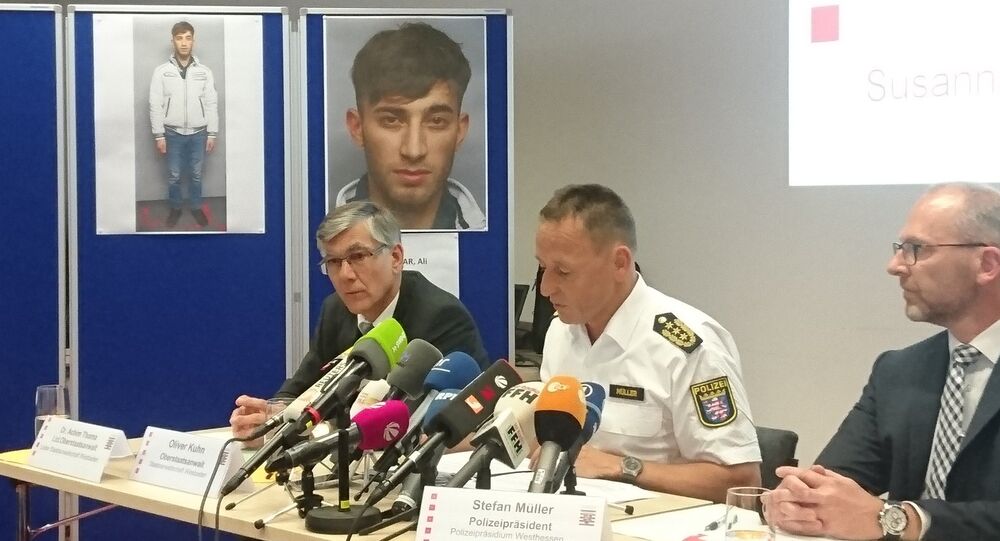 The killing of Susanna Feldman, who was allegedly raped and strangled by a 21-year-old refugee, triggered public outcry in Germany. Her suspected killer, who has also been charged with raping an 11-year-old twice, remained in Germany although his asylum application had been rejected and tried to flee from investigators to Iraq with his family.

The public prosecutor's office in the German city of Wiesbaden has confirmed earlier reports that they pressed charges against 21-year-old asylum seeker from Iraq Ali Bashar over raping and murdering 14-year-old Susanna Feldmann and assaulting an 11-year-old girl, Wiesbadener Tagblatt reports. They have filed three indictments at the district court against the Iraqi, who arrived in Germany in 2015, at the height of the inflow of refugees, and was in the process of appealing the rejection of his asylum application when the murder was committed.

The man fled to Iraq with seven other members of his family as soon as the murdered teenager’s body was found, but was arrested in northern Iraq’s Kurdish autonomy and handed over to Germany. Following the extradition, he confessed to having killed the 14-year-old schoolgirl from Mainz.

According to the prosecution, the suspect, who lived in a refugee shelter in one of Wiesbaden’s districts, assaulted her and demanded to have sex with him. After she refused, he violently forced her to have sex with him. However, Susanna said that she wanted to go to the police, and after a verbal argument, he allegedly attacked the unsuspecting victim, who was sitting in front of him, and strangled her to cover up the rape. Her body, concealed in a hole near the railway line that Ali Bashar had dug "with the help of at least one other unknown person", as the indictment reads, was discovered only 2 weeks after Susanna’s disappearance.

In a separate indictment, the city prosecutor also accused the Iraqi of raping an 11-year-old twice shortly before killing Susanna – first in his room in the asylum shelter, then near a supermarket nearby. The second assault took place as Bashar reportedly tried to force her to make a false statement against his younger brother, who was unable to be tried for an assault against a minor because of his young age. He allegedly did it in the presence of another shelter inmate, at least 14-year-old Afghani Mansoor, who is also charged with raping this girl.

The list of charges against Bashar also includes robbery. The man with an unidentified accomplice threatened with a knife and strangled an Algerian refugee, taking his valuables, on the same day he allegedly raped the 11-year-old. Following the robbery and injuring the victim, he is said to have taken his pants off, but the attacked person managed to flee.

Apart from these two, Bashar’s underage brother, who is believed to be in Iraq now, is suspected of taking part in another assault against the girl, luring her to the forest under the pretense to “fix” his brother’s wrongdoing. The suspected Mansoor is also believed to have raped the girl then. In addition, following Susanna’s death, the Afghani also allegedly threatened the 11-year-old and her sister that they were "dead like that girl" if they said anything.

Incidentally, Frankfurt-am-Main’s prosecutor has announced that they have suspended an investigation into Federal Police President Dieter Romann. He and other federal police had flown to Erbil in northern Iraq, controlled by Kurds, in June to bring the suspect back to Germany. The Iraqi government has lodged a protest with Germany and its own autonomy over the “illegal” extradition of an Iraqi national.