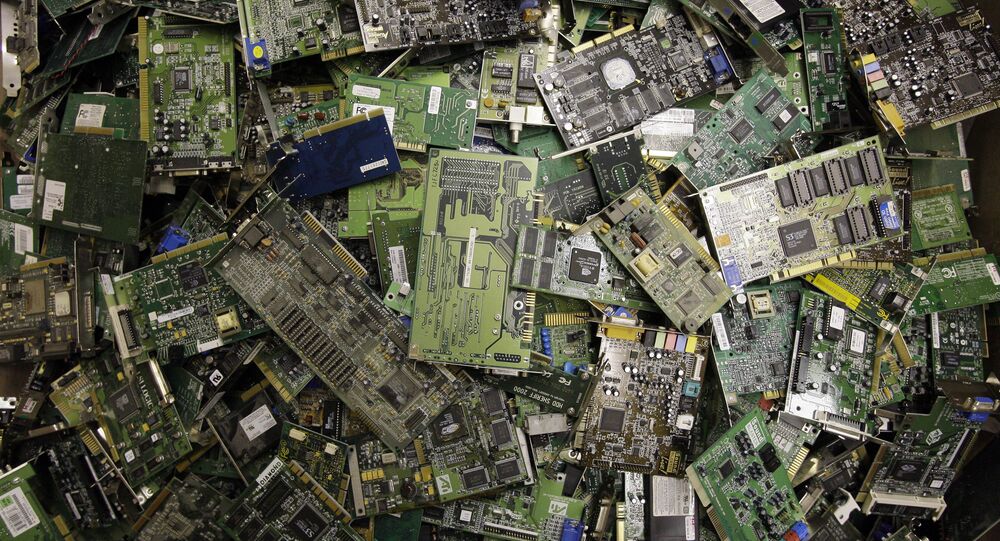 Point of No Return: Elements Used to Make Smartphones Listed as 'Endangered'

Chemical elements used to manufacture smartphones have been added to an "endangered list" of components, according to estimates from University of St. Andrews scientists.

Mobile devices and other electricals make up roughly 30 elements listed, with half predicted to become scare due to limited supplies, lack of capacity for recycling or locations in conflict areas, a press release said on Tuesday.

The European Chemical Society (EuChemS) set to launch an updated version of the chart before the European Parliament in Brussels on Tuesday at 14:30 to 16:30 CET, highlighting elements forecasted to run out in a century.

The new periodic table will be launched at the @Europarl_EN today by MEP & past St Andrews Rector @C_Stihlerhttps://t.co/FZI8DzU1Bx#IYPT2019 pic.twitter.com/CfVn05qgTn

"It is astonishing that everything in the world is made from just 90 building blocks, the 90 naturally occurring chemical elements," Professor Cole-Hamilton said. "There is a finite amount of each and we are using some so fast that they will be dissipated around the world in less than 100 years.

A periodic table chart discovered at the University of St Andrews is thought to be the oldest in the world.

The chart of elements, dating from 1885, was discovered in the University’s School of Chemistry. https://t.co/xoRXwFhU4d

"Many of these elements are endangered, so should you really change your phone every two years?"

The European Chemical Society, the umbrella organisation of organisations charged with uniting the European scientific community on policy issues in chemistry, urged legislators to address scarcity concerns and facilitate recycling trends to promote a circular economy in Europe.

Tomsk Polytechnic University Press Service
Russian Scientists Simplify Synthesis of Effective Materials for Electronics
"As we mark the 150th anniversary of the periodic table, it's fascinating to see it updated for the 21st century," Catherine Stihler, Labour MEP for Scotland and former Rector of the University of St Andrews, said. "But it's also deeply worrying to see how many elements are on the endangered list, including those which make up mobile phones."

"It is a lesson to us all to care for the world around us, as these naturally-occurring elements won't last forever unless we increase global recycling rates and governments introduce a genuine circular economy."

This year celebrate the 150th anniversary of Mendeleev’s #PeriodicTable of Chemical Elements. ⚗ Here is an overview of the countries which helped discover elements since the existence of the table. #ChemistryCan #iypt2019 pic.twitter.com/zEC4ffdK0g

Elemental Scarcity and the 'Right to Repair' Movement in the EU

European Environmental Bureau (EEB) spokesperson Mauro Anastasio told Sputnik that since 2007, over 7bn smartphones have been produced, with most US consumers using their mobiles for two years on average and increasing production straining finite global sources, especially in areas affected by "finance conflict".

"A recent study estimated that 70 kg of natural resources are needed to manufacture just one smartphone," Mr. Anastasio said. "The intensive extraction of natural resources pollutes air, water and soil along the way. Manufacturing, on the other hand, is responsible for almost three quarters of the phone’s total carbon emissions."

© Photo : Mayak
There Are 'Big Beasts' Among 20,000 Pieces of Space Junk - European Space Agency
"The world’s resources are limited, but we are living as if they weren’t," he stated, adding that the global economic system was based on extracting precious resources to create "products with a built-in life-span and throwing them away to then buy new ones". The Earth requires "18 months to replenish the resources humanity consumes in a year" and that "this time is increasing," he cautioned.

Mr. Anastasio also urged consumers to reuse, repair, and recycle electricals before the environment reaches "the point of no return", adding that governments should set standards to ensure access to key components when they fail, improve shock and water resistance, as well as making software updates and spare parts "available to all" to eliminate excessive product replacements.

"Once the product has reached the end of its life cycle and eventually becomes waste, it must then be recycled – but priority must be given to reuse and repair to avoid waste in the first place," Mr. Anastasio said.

When will they end this nonsense? 😠

Mr. Anastasio said that the EU Ecodesign Directive outlines theoretical solutions to ensure that products are designed to be "easily repaired and recycled", adding that resource efficiency requirements for displays, lighting and white goods were discussed in December and January in Brussels, but "smartphones were not on the list of products to be discussed by policy makers".

However, manufacturers such as Fairphone and Puzzlephone have already committed to developing such products, he mentioned.