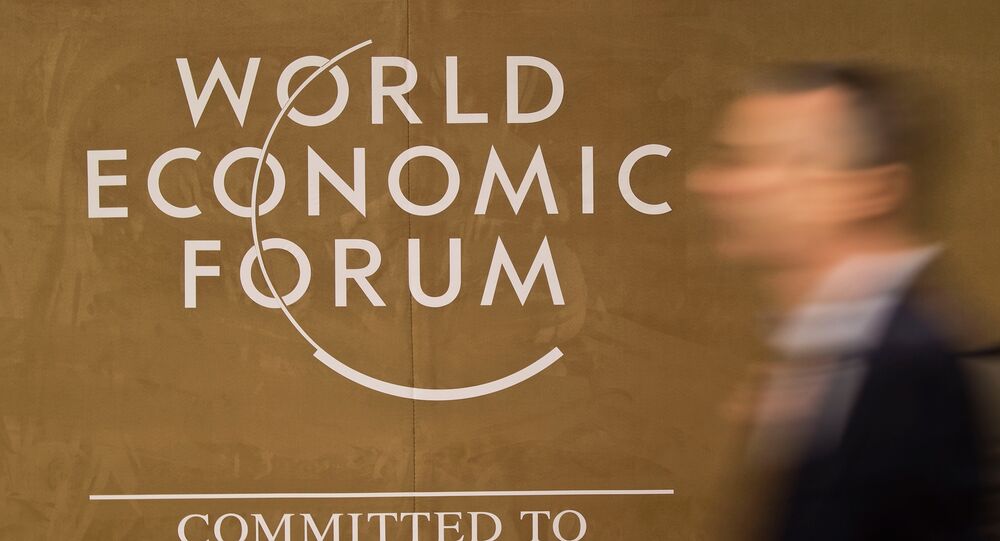 The history of WEF began in January 1971, when a professor at the University of Geneva Klaus Schwab brought together leading business people and politicians in Switzerland for the first time to discuss the prospects for developing European business on the world market.

Such meetings were originally called the European Management Forum and drew participants only from western European countries.

© Sputnik / Aleksey Babushkin
Davos Poll: Public Trust in Nat'l Governments Falls Worldwide
The forum's topics have gradually been expanded over the years and started to include political and economic issues, the implications of technological progress, as well as problems concerning the debt of developing countries.

In January 1974, political leaders were invited to the Swiss town of Davos for the first time. In 1976, the organisation introduced a permanent membership system.

In 1987, the European Management Forum was renamed the World Economic Forum to reflect its increased global significance.

About 1,000 large companies and organisations are currently members of the forum.

Professor Klaus Schwab is the founder and WEF's permanent executive chairman. The forum is headquartered in Geneva.

© AP Photo / Carolyn Kaster
Trump Cancels US Delegation to Davos World Economic Forum - White House
The Annual Meeting is WEF's main event and is held at the world-famous Swiss ski resort, Davos Klosters, in late January – early February. The only exception was in 2002 when the meeting was held in New York in solidarity with the United States after the 9/11 terror attacks.

The Davos meetings include discussions about key international economic issues and are attended by leading political figures, representatives of the scientific and business communities from various countries and international organisations.

The forum’s programme includes "mini-summits" in which government officials participate, and seminars that are organised mainly for the business community, official delegations and certain political figures to interact.

© AP Photo / Markus Schreiber
Russia to Skip Davos Forum if Russian Businessmen Not Invited - PM
Organisers tighten the selection criteria from year to year, which gives a distinctly elite feel to the meetings. Since 1994, the condition for attendance at the forum has been WEF membership. WEF members pay annual dues to the forum, which are in turn used to organise the forum's events. The contribution rates are established in negotiations with the WEF's leadership.

WEF also holds regional summits in which government and business communities, as well as their trade and financial partners from other regions participate; national (country-specific) meetings, two-day seminars and symposia with the participation of business representatives and members of the government; informal meetings between government representatives and delegates from the leading companies of selected branches of industry (industrial summits).

READ MORE: Treasury Secretary Mnuchin to Head US Delegation at Davos Instead of Trump

The forum has a rather complex organisational and management structure.

© REUTERS / Bandar Algaloud/Courtesy of Saudi Royal Court
Riyadh Promises No Penalties for Banks Boycotting 'Davos in Desert' - Reports
The Board of Trustees acts as guardians of the forum’s mission and values. Board membership is divided equally between business representatives and leaders of international organisations and civil society. Klaus Schwab heads the Board of Trustees.

The Managing Board, chaired by the Forum’s President Borge Brende acts as the executive body of the World Economic Forum, ensuring the implementation of the forum’s activities and acting as its representative for third-party organisations. The board is held collectively responsible for the forum and is accountable to the Board of Trustees.

Operational guidance is provided by the Executive Committee, which includes representatives from more than 60 countries.

There are three centres in WEF's structure: for global, regional, and industry agendas.

Each year, WEF publishes reports and rankings, in particular, the Global Competitiveness Report, the Global Gender Gap Report, Regional Risks for Doing Business, and others.

© REUTERS / Denis Balibouse
Davos 2018 Forum the ‘Conference of Disillusionment’ - Economist
A Soviet delegation participated in the forum for the time in 1987. Russia as a sovereign country has been participating in Davos meetings since 1992.

In 2018, the 48th World Economic Forum was held in Davos from 23-26 January and was attended by 70 heads of state and governments. The theme of the forum was "Creating a Shared Future in a Fractured World".

The official Russian delegation in 2018 was headed by then-Deputy Prime Minister Arkady Dvorkovich.