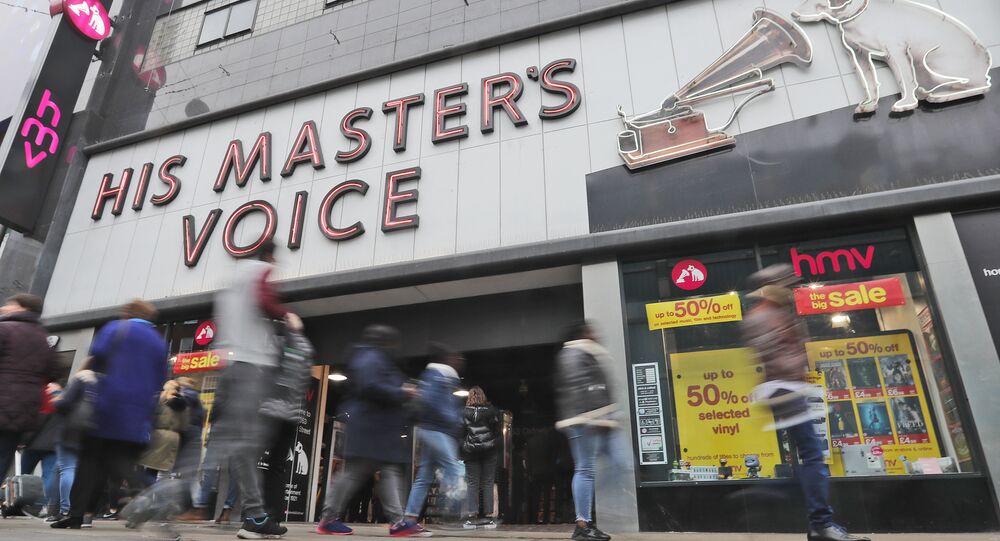 Mr. Ashley, who owns Sports Direct and Newcastle United, bought out struggling collapsed retailer House of Fraser for £90m in August of last year, as well as Evans Cycles in October.

"HMV has clearly not been insulated from the general malaise of the UK high street and has suffered the same challenges with business rates and other government-centric policies which have led to increased fixed costs in the business," Paul McGowan, chair of HMV's owner Hilco said in December.

Mr. McGowan also said that HMV's market share grew month-to-month in 2018, but that industry forecasts predicted a 17 percent drop in revenues in 2019, with HMV ceasing to trade.

© AFP 2020 / Justin Tallis
British Retail Sector Collapse Ongoing as HMV in Administration Again
KPMG was commissioned to find a buyer for HMV, with all 125 HMV stores to continue operating until negotiations with suppliers conclude, allowing the company to continue trading. The professional services company and member of the UK's "Big Four" firms – alongside Deloitte, EY, and Pricewatercoopers – had received offers "on a number of bases", with Mr Ashley entering the "bidding process ahead of the 15 January deadline," according to Sky News.

Will Wright, KPMG Partner and joint administrator, said in December that while HMV continued to outperform declining DVD and CD markets, "the company has suffered from the on-going wave of digital disruption sweeping across the entertainment industry… in addition to the ongoing pressures facing many high street retailers, including weakening consumer confidence, rising costs and business rates pressures."

© AP Photo / Alastair Grant
Monarch Aircraft Engineering Falls Into Administration, Costing 450 Jobs
"What is clear is that following its first move into administration in 2013, HMV has enjoyed a remarkable turnaround and it is conceivable that this will happen again. The fact is the physical entertainment market is still worth up to £2bn a year so there is plenty of business there."

"For the sake of HMV's staff, customers and suppliers, we are very much hoping HMV can turn things around again."

So am I the only one today who is more anxious for #hmv than #Brexit ??

Alex Neill, managing director of home products and services, said in December press release: "It's a worrying time for everyone when a company goes into administration but for customers, it's important to remember that your consumer rights may be affected."