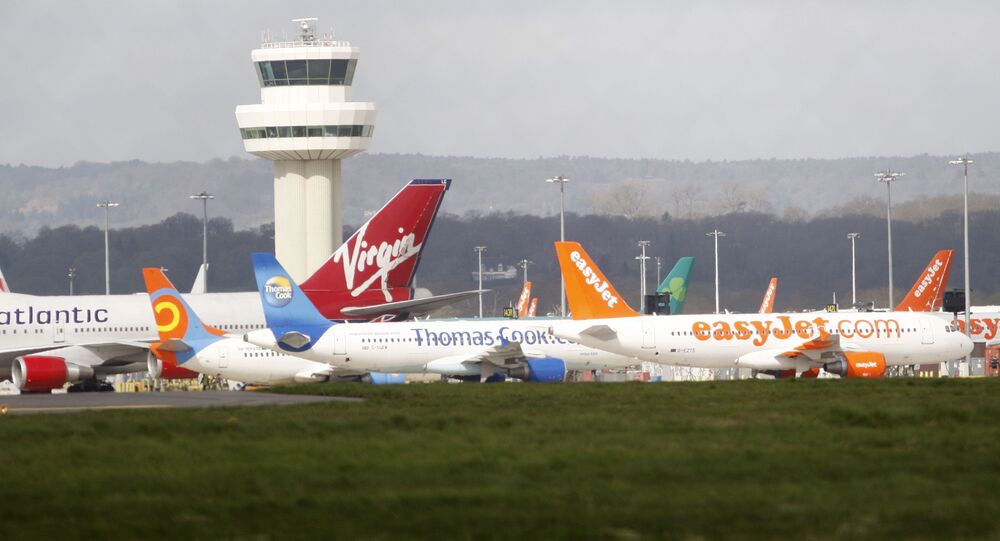 A man has been charged with flying a "small unmanned aircraft without permission of air traffic control", in an incident that took place near London's Heathrow Airport on 24 December, British media reported on Sunday.

38-year-old George Rusu from the London Borough of Hillingdon is due to appear at Uxbridge Magistrates' Court on Tuesday.

The charges against Rusu come after flights were grounded for three days from 19 December at Gatwick Airport near London after drones were spotted near runways, disrupting the Christmas plans of 140,000 travellers and grounding more than 1,000 flights.

A Gatwick Airport spokesperson told Sputnik that the airport has already injected "several million pounds to ensure it is equipped to the level provided by the Armed Forces and this was in place within days of the main drone incident on 20 December".

"This new equipment bolsters the existing detection and safety protocols that the airport already had in place, which were effective in ensuring the safety of our airfield during the incident," the spokesperson added.

Commenting on the Gatwick incident in an interview with Sputnik, drone enthusiast and CEO of IT security firm LGMS Choong-Fook Fong, for his part, described it as a sign of a "real risk" because "the authorities have no effective measures to take down unidentified drones".

The incident "exposed the vulnerability that we are still lack of counter measures against rogue drones", Fong said, suggesting that the worst-case scenarios may include "commercially available aerial drones strapped with explosives and the deployment of the explosives to the airport".

© REUTERS / Henry Nicholls
UK Military Deploys 'Specialist Equipment' at Heathrow Airport After Drone Sighting Causes Chaos
He was echoed by Philip Banks-Welsh, partner and head of Drone Law at Royds Withy King, UK, who underscored in an interview with Sputnik the need "to have a distinct set of rules and a legal framework that protects designated sensitive sites, including airports, where any drone can be intercepted and destroyed".

Kevin Curran, professor of cyber security at the Faculty of Computing, Engineering and the Built Environment at Northern Ireland-Ulster University, in turn warned of "the wider treat that terrorists will use drones for attacks in general".

READ MORE: British Army Pulls Out of Gatwick But No Clues About Who Caused Drone Disruption

"For instance, drones can be used by terrorists either to assassinate high-profile public leaders or to bring down aircraft. They are a major worry for the future and I suspect we will see drone assassination or drone suicide attacks dominate the news in the future," he told Sputnik.