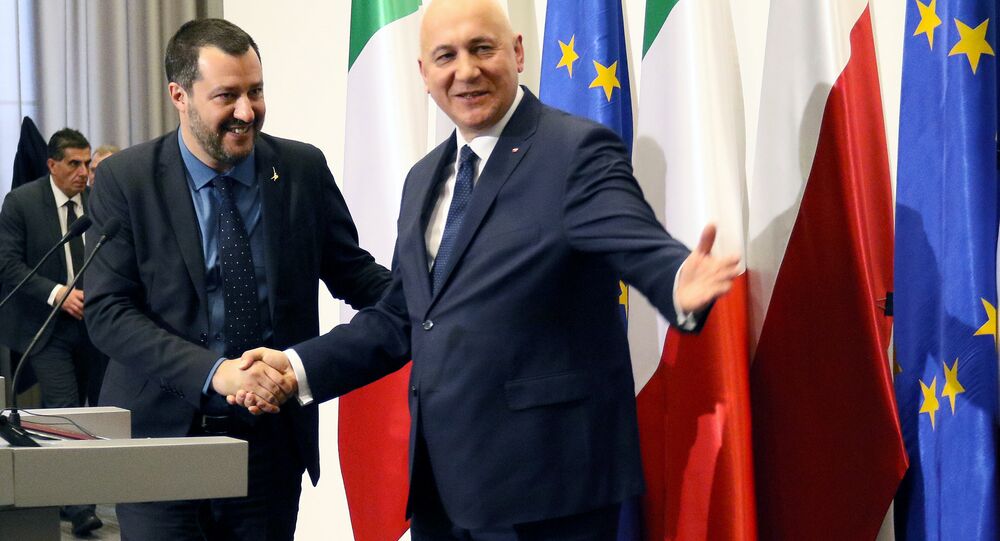 Last week, Italian Deputy Prime Minister Matteo Salvini travelled to Warsaw to meet with Jaroslaw Kaczynski of Poland's ruling Law and Justice Party, where he announced that the two countries would be the leaders of a "new European spring" that would transform Europe's political landscape.

Salvini, leader of the League, a northern Italian Eurosceptic party which surged in popularity ahead of Italy's elections last spring and gained a leadership role in the Italian coalition government, may have had a motive in mind beyond the solidification of a right-populist alliance ahead of European Parliament elections in May, Bloomberg Italy correspondent John Follain believes.

According to the observer, amid the League's growing popularity at home and flagging support for Five Star, the other major party in the Italian government coalition, Salvini may be tempted to push for early elections at home if the European elections bode well for his anti-immigration, Eurosceptic allies.

A fresh opinion poll conducted by Italy's La7 TV last week, showed League support jumping to over 32 percent in January, up from the group's 17.4 percent showing in elections last March. Five Star, meanwhile, polled at 25.2 percent, down from 32.7 percent in last year's vote.

Meanwhile, Follain noted, the League and Five Star, which come from different parts of Italy (the League from the country's industrialised north and Five Star mostly from Italy's less-developed south), continue to wrangle over social and economic policy.

Salvini, for instance, favours a $10 billion high-speed rail infrastructure project with France as well as plans to drill for oil in the Adriatic Sea, while Five Star leader and Deputy Prime Minister Luigi Di Maio opposes these plans. The coalition was forced to dilute key election promises, including increased welfare benefits (a Five Star pledge) and a lower retirement age (a League promise), under pressure from Prime Minister Giuseppe Conte, an independent, as well as Giovanni Tria, the country's centre-right-leaning finance minister.

Italy's Deputy PM & #Lega leader Matteo #Salvini is in talks with Giorgia #Meloni, leader of the #FdI party, to join the coalition govt.This would cement Salvini's dominance over the coalition & would support his anti-immigration push / #farright #populismhttps://t.co/Au7TbgMuFG

According to Follain, "behind the scenes, senior League officials are pressuring Salvini to consider forcing an early general election". Doing so would require the approval of President Sergio Mattarella, a veteran of Italian politics and a centrist. Before Mattarella calls for an election, he would be likely to "first seek an alternative administration –possibly an alliance between Salvini and former centre-right Prime Minister Silvio Berlusconi," the observer wrote.

© CC0 / Robert_z_Ziemi
Are Poland and Italy Teaming up to Go After Brussels?
Speaking to Bloomberg, John Cabot University president Franco Pavoncello noted that Salvini "will be out to capitalise on a big win" in May's European Parliament vote. If successful, "his ambition to become premier (prime minister) will be hard to contain", Pavoncello stressed.
...
Reddit
Google+
Blogger
Pinterest
StumbleUpon
Telegram
WhatsApp
63

Varoufakis to Sputnik: Salvini Getting Ready to Leave Eurozone, Europe is Dying