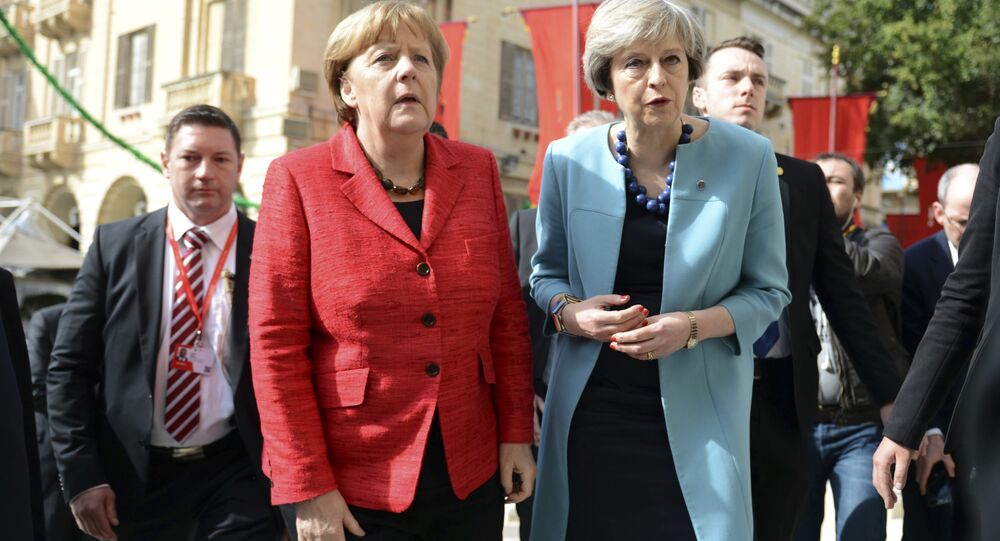 UK prime minister Theresa May has not been offered any concessions on Brexit by German chancellor Angela Merkel, a spokesperson from the German government said on Tuesday.

The news refutes an article published by the UK Sun, which said that MPs had condemned the ‘letters of assurance' from EU officials and called it ‘worthless' and ‘a small fig leaf'.

"The German Chancellor has given no assurances beyond those that were discussed by the European Council in December and what is set out in the letter from (European Commission President) Jean-Claude Juncker and (European Council President) Donald Tusk," the spokesperson said as quoted by Reuters.

© Sputnik / Alexey Vitvitsky
LIVE UPDATES: Confidence Vote to Be Held on Wednesday After UK PM's Brexit Deal Voted Down
European Commission president Jean-Claude Junker and European Council president Donald Tusk had reportedly promised to enforce the backstop as a last resort and only for "as short a time as possible".

They also insisted that trade deal negotiations begin the moment Mrs. May's deal was passed by MPs instead of 29 March, or the deadline for withdrawing from the EU.

The Prime Minister's Democratic Unionist Party (DUP) allies also urged her to return to Brussels to scrap the backstop, the Sun stated.

If May's Brexit deal is voted down by MPs today, the EU and UK could have new talks, German foreign minister Heiko Maas said on Tuesday.

Parliament will vote on the Prime Minister's unpopular Brexit deal, with the House of Lords already voting down the draft plan Tuesday morning. Commons is expected to vote on the deal later today.