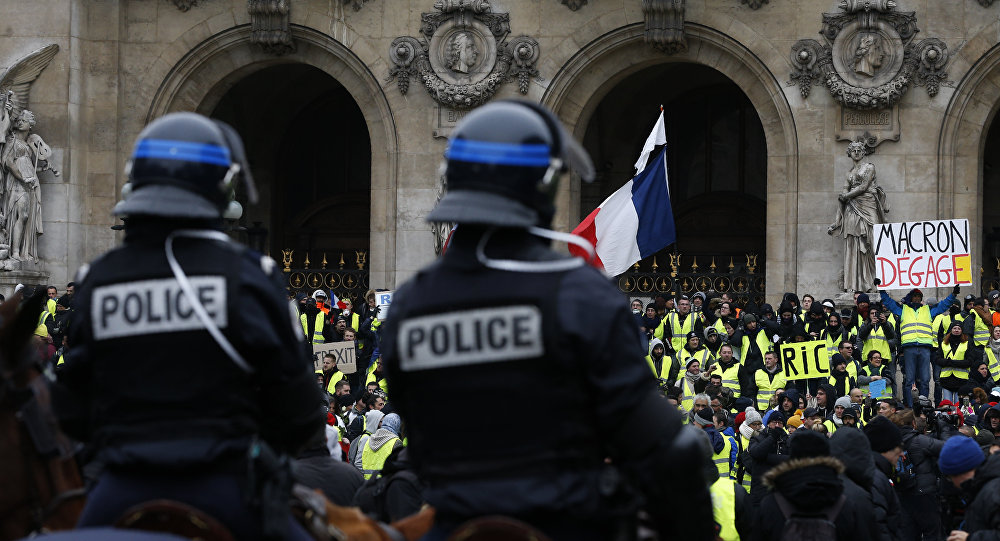 The call comes as French Prime Minister Eduard Philippe said that about 80,000 law enforcement officers had been mobilised throughout the country, including about five thousand in Paris alone, ahead of the ninth wave of Yellow Vest demonstrations, scheduled for Saturday.

Yellow Vest protesters have called on their supporters to withdraw their money from French banks in a bid to disrupt "the system" and make the government heed the protesters' demands, specifically related to their right to propose and vote on new laws, according to France 24.

The news network cited a protester identified as Tahz San as saying that they are "going to frighten the state with legal means, without resorting to violence".

"We know that it isn't the government that's in charge, but the banks. If the banks are weakened, the state is also weakened," he claimed.

Maxime Nicolle, another Yellow Vest protester, in turn referred to "a lot of people" who he said are ready to withdraw their money from the banks.

"Because you're making money with our cash, and we're fed up," he added in a video posted on Facebook.

According to France 24’s business editor Christophe Dansette, these cash withdrawals will not affect French banks because the daily sum of cash a client is allowed to withdraw from an automated teller machine (ATM) is restricted.

"There is very little chance it will work. The amount of money French people have deposited in banks is estimated at €1.5 trillion, according to the Bank of France. Of this amount, €390 billion is currently (available). Every French person would therefore have to withdraw €5,800. This is very difficult, if not impossible, considering that cash withdrawals from ATMs are limited," he explained.

The developments come as France is preparing for the ninth weekend of Yellow Vest protests, which are planned to take place in cities throughout the country on Saturday.

The French Interior Ministry, for its part, stated that the ninth wave of demonstrations may gather more than 50,000 'yellow vests' in Paris and beyond.

While the French government scrapped its planned hike in fuel taxes, which initially sparked the protests, the "yellow vests" have evolved into a broader movement against unwelcome government policies and rising living costs. The rallies have been marked by violent clashes between protesters and police.

Over 4,500 People Detained Since Eruption of Yellow Vest Protests - Reports