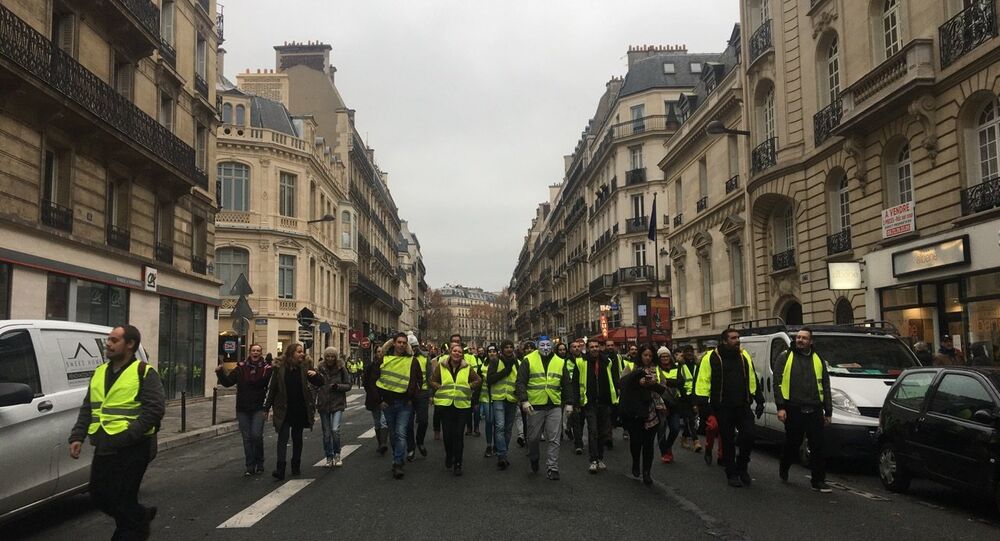 PARIS (Sputnik) - Benjamin Griveaux, the official spokesman for the French government, on Wednesday claimed that some Italian ministers and the RT broadcaster have similar stances as they are supporting the yellow vests protests that have been shaking France since mid-November.

Following a ministerial council meeting held earlier in the day, Griveaux told reporters that the yellow vest movement was comprised both of "sincere" people, including women and retirees, and "insurgents," with some of them being "ultra-left" or "ultra-right."

"Some of them are even supported from abroad… I mean at least morally supported. There was a recent statement by two ministers from the Italian government who do not conceal their support [for the yellow vest movement]… We know about benevolence shown by certain propaganda tools — I don't even say media — such as Russia Today toward the movement," Griveaux told reporters.

He added that some yellow vest protesters believed that RT was the only "free media."

The statement referred to an open letter published  to the protesters by Italian Deputy Prime Minister and Minister of Economic Development Luigi Di Maio on Monday, dubbed "Yellow vests, do not give up!" offering them support from his anti-establishment Five Star Movement party, slamming acts of violence by French police officers, and qualifying the yellow vest movement as a peaceful one. Italian Deputy Prime Minister and Interior Minister Matteo Salvini expressed his support for the protesters as well, adding that he "firmly and fully" condemned any act of violence.

© REUTERS / Pascal Rossignol
Paris Lashes Out at Italian Deputy PM for Supporting 'Yellow Vests' Protesters
The RT's stance, mentioned by the spokesman, has been voiced by Margarita Simonyan, RT and Sputnik’s editor-in-chief, in early December. She pointed to the fact that RT resources had 20 times more views of the reports about the yellow vests protests than French media. According to her, some French people were sending videos featuring yellow vest rallies to the RT having lost trust in their own media.

The wave of the so-called yellow vests protests — named after the obligatory attribute of French cars — started in mid-November. While the French government has scrapped its planned hike in diesel taxes, which is what initially sparked the protests, the yellow vests have evolved into a broader movement against government policies and rising living costs. The rallies have been marked by violent clashes between protesters and the police.