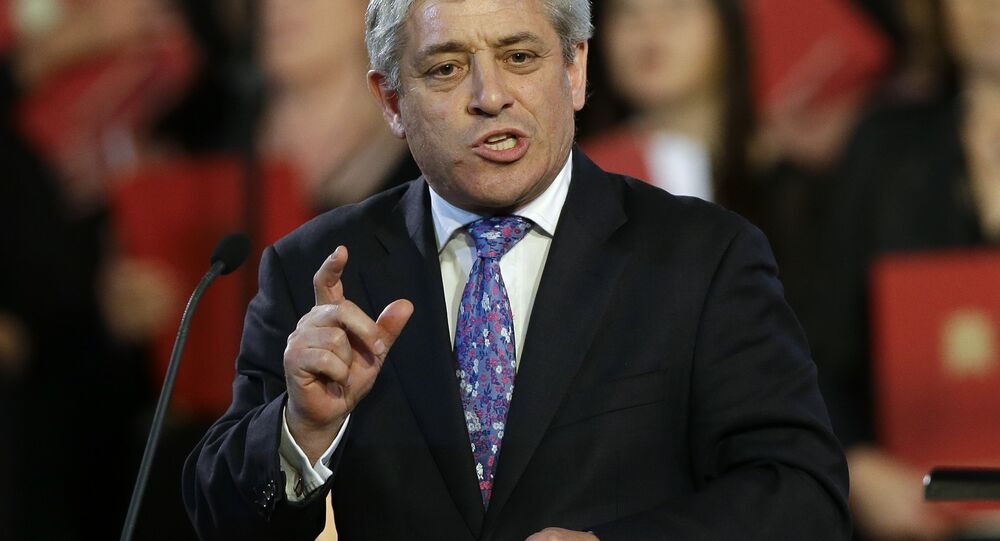 Conservative MP and Remainer Dominic Grieve tabled an amendment forcing the government to return with alternative plans if MPs vote down Mrs. May's embattled draft plan on Brexit next week.

The amendment would give Eurosceptics an "unshakable conviction" that the Speaker was "no longer neutral", Tory MP Crispin Blunt said. Conservative Adam Holloway also accused the Speaker of anti-Brexit bias after a "Bollocks to Brexit" sticker was found on Mr. Bercow's car.

© AFP 2021 / JUSTIN TALLIS
Tired of Waiting: British MPs Say 3 Days Enough to Suggest Alternative If Brexit Deal Is Rejected
"We've all noticed in recent months a sticker on your car making derogatory comments about Brexit," Mr. Holloway said, to the chagrin of MPs. "No — this is a serious point about partiality," Mr. Holloway continued. "Have you driven that car with the sticker there?"

But Mr. Bercow admitted that the sticker "belongs to my wife" and that Mr. Holloway had made a "factual error".

"That sticker on the subject of Brexit happens to be affixed to or in the windscreen of, my wife's car," Mr. Bercow said. "And I'm sure the Honourable Gentleman wouldn't' suggest for one moment that a wife is somehow the property or chattel of her husband?"

"She is entitled to her views: that sticker is not mine and that's the end of it," Speaker Bercow concluded.

Despite accusations from Conservative MPs over Brexit bias, Mr. Bercow reiterated he was a "champion the rights of members wishing to push their particular point of view on a range of issues".

John Bercow’s disgraceful behaviour has destroyed the Speaker's reputation for impartiality. This will cause a lot of permanent damage. Shame on him!

Parliament is in breach of its own law, thanks to the outrageous actions of EU stooge & enemy of the people John Bercow. A loathsome individual that has betrayed our proud democratic freedoms. He is the type of fascist that would have sided with Hitler against his own country.

However, Mark Francois MP launched fresh accusations against Mr. Bercow, stating that he violated centuries of parliamentary convention by backing Mr. Grieve's amendment, which only ministers could change, he stated.

"I have never known any occasion when any speaker has over-ruled a motion of the House of Commons…" he said angrily.

"You have said again and again you are a servant of this House," Mr. Francois shouted. "And we take you at your word. And I have heard you many times on points of order, when people have challenged you, saying ‘I cannot do X or Y because I am bound by a motion of the House'."

"You've done that multiple times in my experience. So why are you overriding a motion of the House today?"

No. 10 also joined the discussion with a spokesperson for the Prime Minister saying to reporters: "We are surprised the amendment was selected. The advice we received was that it would not be in order."

This is not the first time Tory MPs have targeted the House Speaker, after several accused him of refusing to acknowledge Mr. Corbyn's comments where he allegedly called the Prime Minister a "stupid woman", with Andrea Leadsom and Sir Patrick McLoughlin leading the attacks.

But Mr. Bercow assured that he had not heard or seen the comments and could not rule on the point of order, adding that it was incumbent on all MPs to "operate in accordance with its best conventions".