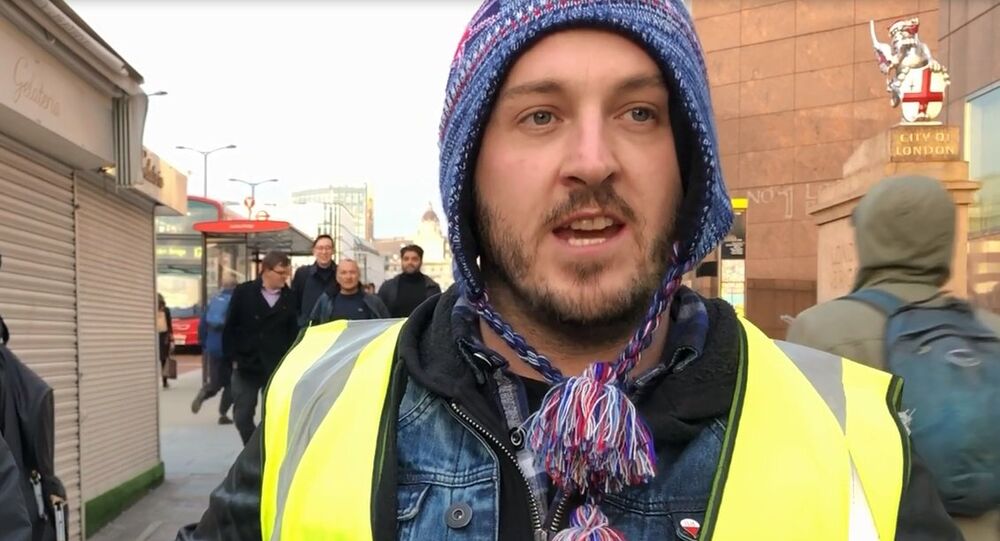 One of the pro-Brexit activists, who has been reported to take part in verbally abusing Tory MP Anna Soubry, has retaliated to the accusations and slammed the MP for not answering Brexit questions and spreading lies on Twitter.

A staunch opponent of Britain remaining in the European Union, protester James Goddard, who could be seen in a video clip of a heated verbal exchange accompanying Soubry on her way to the Parliament, responded to security concerns voiced by MPs on Tuesday.

"We are not a threat, we are just every day working class people who have had enough of being treated like our voice doesn't count. All we wanted to do was ask questions and as an MP why can't she answer them? We did not threaten her and we are being compared to the murderer of Jo Cox which is absolutely disgusting and we have also been forced to tolerate being called ‘nazi scum' and ‘gammons' and ‘racist thugs' among many other things for years!!! Which MP stood up for any of us or don't we count?!!!" Goddard wrote on his Facebook page that has been since then broken or removed.

The protester, who earlier in December took part in the 'Yellow vests UK' demonstration in London, argued that Anna Soubry had spread "lies about me on Twitter!"

"She's called a Nazi because she's acting like one, we must remember the Nazis were elected into power and then went against ordinary Germans! Pretty much echoing what's going on this country! If the political class weren't trying to thwart Brexit, then I wouldn't have to approach these treacherous MP's. Has anyone noticed how they bang on about equal rights for women, yet when they're approached they go into meltdown!" Goddard said.

"I was pretty cheesed off at being called a Nazi. I think that's exceptionally offensive and I don't think that's acceptable. I think the police should have intervened to tell them to cut that word out," Ms. Soubry said in a televised interview.

On Tuesday, the Metropolitan police said there will be officers outside on duty near the Parliament, who have been "briefed to intervene appropriately where they hear or see breaches of the law."

The Speaker of the House of Commons John Bercow commented on the security concerns voiced by the MPs.

"It's a type of fascism. Let's be quite clear about that, it's a type of fascism. Women and ethnic minority citizens, in particular, are being targeted. I don't say that they're the only people on the receiving end of this completely unacceptable behaviour but they have been and are being deliberately and disproportionately targeted. That is not acceptable and we have to ensure that something is done about it," Bercow said.

James Goddard, who issued a video statement in response to the accusations against him and his fellow protesters, said:

"A message to Bercow and his chums, you will never stop me, I'm not afraid of you!"

The Yellow Vests UK activists have been vocal against the Brexit withdrawal proposal by the Prime Minister Theresa May, as well as the possibility of a second referendum.

They actively support Brexit, even in its hard form, and have called on the government to act according to the choice made by the British people in 2016.