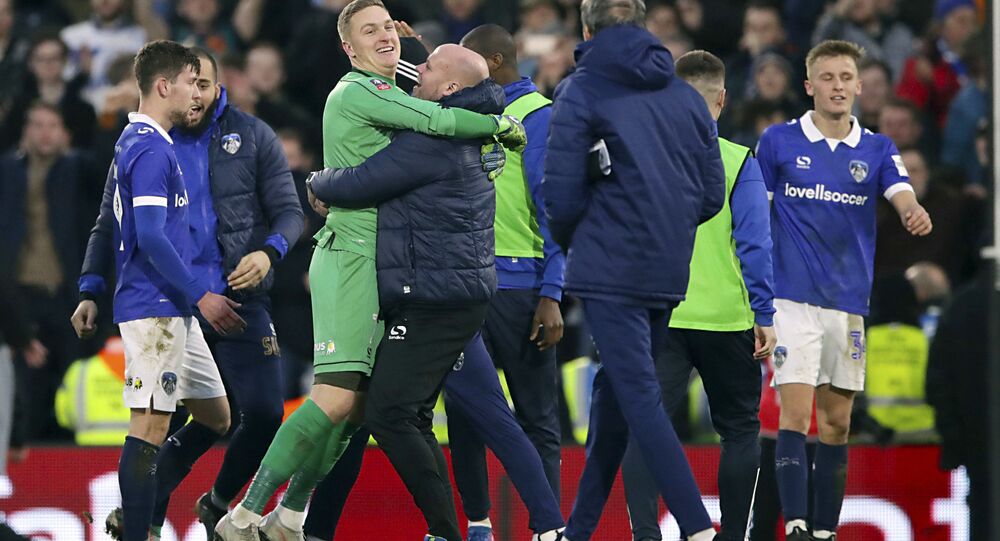 Oldham Athletic - from the fourth tier in English football - knocked out Premier League Fulham on Sunday in an FA Cup giant-killing.

The final game in the FA Cup Third Round takes place on the evening of Monday, January 7, and will be followed by the draw for the next phase.

Oldham will be in the hat and Pete Wild, a boyhood fan who became the club's caretaker manager last month, has said he is hoping they draw Manchester United.

In the 1990s Oldham were in the Premier League for two seasons and in 1994 they reached the semi-final of the FA Cup and were 1-0 up against United in extra time.

But Mark Hughes volleyed home an equaliser in the 120th minute of the game and United won the replay 4-1.

Oldham, who are located just in a Victorian mill town just east of Manchester, were relegated and have slipped further down the league, suffering considerable financial difficulties along the way.

Last January they were taken over by Abdallah Lemsagam, a Dubai-based Moroccan football agent, who told the local radio station the club could have gone out of existence without his takeover.

Oldham have struggled in the league and Mr. Lemsagam sacked manager Richie Wellens in the summer after relegation from League One, and then fired another boss, Frankie Bunn, just before Christmas.

Mr. Lemsagam says he is putting £200,000 a month into the club at the moment to keep it afloat.

Unwilling to splash money on an expensive manager, Mr. Lemsagam decided to promote Wild — who had never played football professionally — from academy coach to manager.

Wild has returned the owner's faith with two successive victories in the league over Christmas and then by pulling off an astonishing 2-1 victory at Fulham on Sunday, January 6.

Social media users reacted with joy at footage of Wild — who would have travelled to the game by train as a supporter, if he had not suddenly been promoted to manager — dancing a jig on the touchline after the winning goal.

"It's Roy of The Rovers stuff isn't it?" said Wild, referring to a British comic strip hero.

Wild, who was only eight years old in 1994, said United "ruined his childhood" with that last-gasp winner at Wembley and he wants revenge.

But he will have to do it without Sam Surridge — who scored Oldham's first goal on Sunday — as he has been recalled from a loan spell by his parent club, Bournemouth.

United — who are managed by Ole Gunnar Solskjaer, who joined two years after that win against Oldham — defeated Reading 2-0 on Saturday.