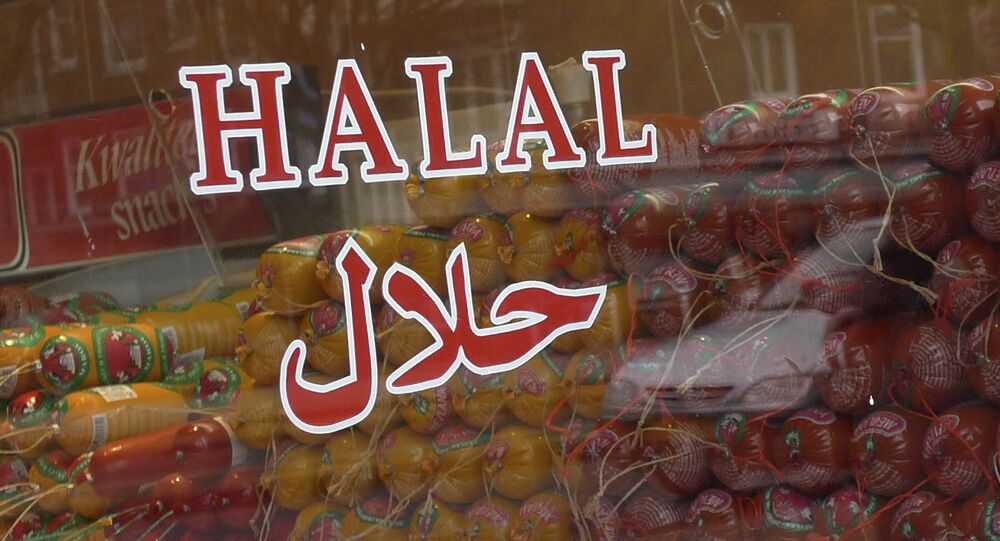 Jewish and Muslim traditions stipulate that animals must be in perfect health when they are killed, which is directly at odds with some European laws that require livestock to be incapable of feeling pain when they are slaughtered.

Belgium's region of Flanders has officially outlawed kosher and halal animal slaughtering methods, prompting Jews and Muslims, who argue that such a measure amounts to religious discrimination, to file lawsuits.

Most European countries offer religious waivers that allow for the production of halal and kosher meat, although EU regulations state animals must be rendered insensible before being slaughtered so they cannot feel pain.

© CC BY-SA 2.0 / Haldean Brown
Global Outreach? Toblerone Goes Halal, Provoking Fear of Europe's 'Islamisation'
Since halal and kosher methods do not envisage stunning animals, with religious laws requiring the animals to be perfectly healthy and alive when their necks are cut, Belgium made the decision, which has sparked a furious backlash from those concerned.

Muslim and Jewish religious leaders are now challenging the change, saying it violates their religious freedom, and insist that halal and kosher methods are more humane.

Rabbi Pinchas Goldschmidt, the president of the Conference of European Rabbis, has, in fact, claimed that the ban was a sign that "radical Islam has won":

"We are in the midst of an attack on the freedom of religion. The European capital has, with its laws and lack of tolerance for minorities, proven that radical Islam has won. We managed to block many [similar pieces] of legislation in other countries in Europe and attempts to pass bills in the European Parliament and initiatives in the EU’s agencies".

Another Rabbi, Menachem Margolin, chairman of the Europe Jewish Association (EJA), told i24NEWS that this kind of action "sets a bad example for other countries".

"This puts a shadow on our community and Jewish laws, as it is essentially saying that we cannot be trusted with the welfare of animals – that we need government supervision. This is a terrible precedent to set on an international level".

A lawyer representing Islamic institutions, Joos Roets, told The Times that the ban was motivated by religious discrimination rather than animal rights.

"The government asked for our advice on the ban, we responded negatively, but the advice wasn’t taken. This ban is presented as a revelation by animal rights activists, but the debate on animal welfare in Islam has been going on for 1,500 years. Our way of ritual slaughtering is painless", The Times cited Saatci Bayram, a Muslim leader in Belgium, as saying.

The New York Times quoted Ann De Greef, director of Global Action in the Interest of Animals, a Belgian animal rights group, who said that stunning doesn't clash with kosher and halal methods, and "they could still consider it ritual slaughtering," but the religious leaders won't accept that.

"They want to keep living in the Middle Ages and continue to slaughter without stunning — as the technique didn’t yet exist back then — without having to answer to the law. Well, I’m sorry, in Belgium the law is above religion and that will stay like that".

Belgium has joined Sweden, Norway, Iceland, Denmark, and Slovenia among the nations that do not provide for any exceptions. The European country with a population of around 11 million, is home to over 30,000 Jews and some 500,000 Muslims.