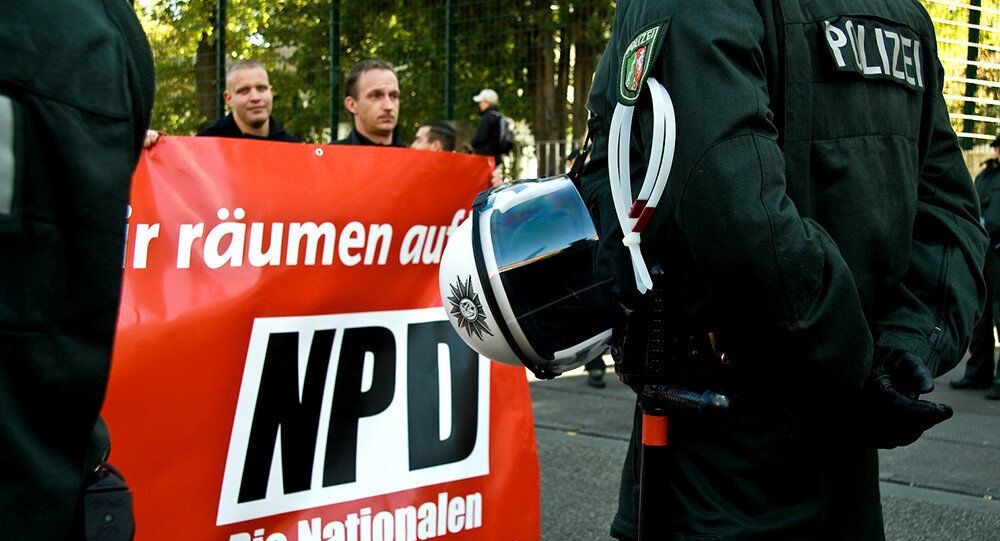 Senior police officials have insisted that they would treat NPD patrols as “an unregistered political gathering”, while the right-wing party retorted that Germany’s “freedom to roam” laws afford its members the right to patrol the streets.

Shortly after the right-wing National Democratic Party of Germany (NDP) announced that its members had started patrolling the streets of Amberg in the wake of a violent attack perpetrated by migrants, police officials moved to challenge the claim.

As an Amberg police spokesperson explained to Deutsche Welle, authorities are yet to see any NDP patrols in the town, though they are aware of the party's social media posts regarding these alleged activities.

"We haven't seen anything. There were just pictures of people on social media," the spokesperson said.

© AP Photo / Julian Stratenschulte/dpa
German Police Detain Syrian National Suspected of Planning Terror Act - Reports
On 2 January, several photos depicting a group of NDP members walking around Amberg were posted on the NPD Nurnberg Facebook page, captioned: "When we say "create #zones in #amberg", then we mean it. A video follows in the next few days."

He further insisted that if these patrolmen were to stumble upon any kind of incident, they would promptly inform the police instead of taking matters into their own hands, unless the situation was "acute" and required an immediate response.

According to German media, police have warned that they would treat NPD patrols as "an unregistered political gathering", while the right-wing party retorted that Germany’s "freedom to roam" laws afford its members the right to patrol the streets.

The attack which triggered this development occurred on the evening of 29 December, when four drunken teenagers, all of them asylum seekers from Iran and Afghanistan, allegedly assaulted random passersby, resulting in 12 civilian injuries.

This incident is the latest addition to the growing number of violent crimes perpetrated by migrants and asylum seekers who entered Germany in recent years, flocking from parts of the Middle East and Africa.