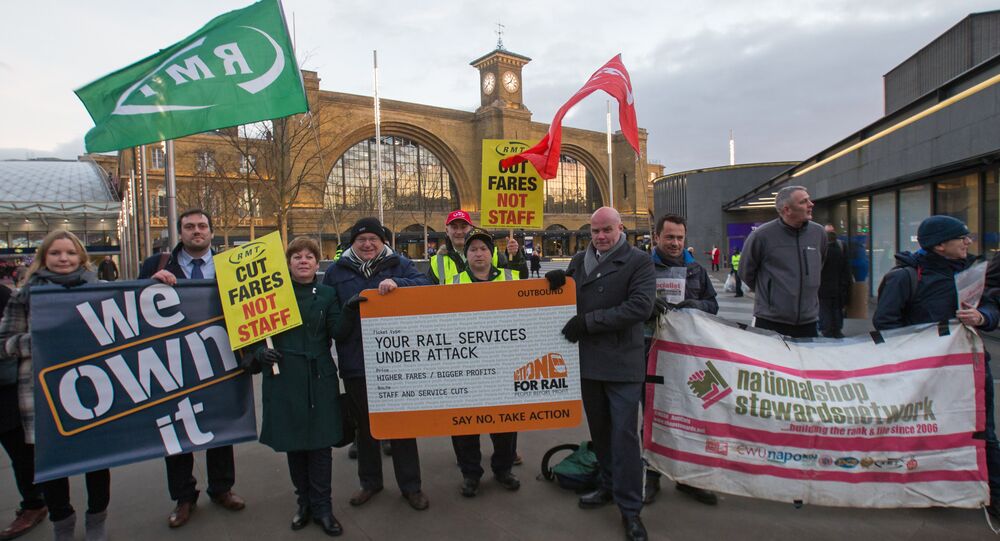 Demonstrators outside Manchester Piccadilly station started their own #FirstDayBack campaign by handing out "Cut fares not staff" leaflets Wednesday morning over above-inflation fares rise of 3.1 percent, despite a 13-year low in punctuality.

"I can't comprehend how the management continue to get these huge bonuses when the service is just so poor," one BT worker said. "Why are the bonuses not performance-based? Chris Grayling should be responsible."

"I'm definitely not happy with the rise. There's no justification really for it at the moment," Phillip Shields, 32, said. "They keep promising every year that they're going to improve services but it never seems to materialise. It's the same statements they repeat over and over again, every year."

Mr. Grayling's Remarks and Their Aftermath

Mr. Grayling defended his decisions on BBC Radio 4's Today programme Wednesday morning by blaming trade unions, stating that "unions demand — with threats of national strikes, but they don't get them — higher pay rises than anybody else."

"Typical pay rises are more than 3% and that's what drives the increases," Mr. Grayling said. "These are the same unions that fund that Labour party."

Mr. Grayling's comments prompted fresh calls to renationalise UK railways, with Labour leader Jeremy Corbyn supporting protestors near King's Cross station in London, calling the price hikes a "disgrace" and stating that the UK should instead "invest in our railways as a public investment".

Another 3% is being added to fares — meaning they've now risen by 36% since 2010. It's disgraceful. #RailFares #BackToWork #TheDailySqueeze pic.twitter.com/N7vvMUVsct

"If we don't invest then people will have to suffer in their journeys, and we end up with more people using their cars and that's far more dangerous for our environment than rail travel," Mr. Corbyn added.

RMT general secretary Mick Cash said that the "toxic combination" of mismanagement and profiteering from private companies has forced Brits to endure the nation's "rip-off railways".

This is a pathetic attempt to shift the blame for Tory fares policies onto the staff who run the railway. It's telling that Grayling doesn't suggest slashing the salaries of train company bosses or dividends paid to shareholders of private train companies. https://t.co/Hnjfbw5Um8

"Our passengers have been left paying the highest fares in Europe to travel on rammed out and unreliable services and that is a national disgrace," Mr. Cash said in a press release. "The only solution is to sweep this whole racket away and return our railways to public ownership."

Mr. Cash also called for Mr. Grayling's resignation, stating the Tory transport minister "should go, and he should go now."

According to Tory Chris Grayling rail STAFF are to blame for the eye-watering train fare rises not fat cat pay or fact private rail companies have paid out more then £1 billion in dividends to shareholders over the last six years https://t.co/h1umR32kZc

"We don't accept this — it's too much money, too little in return and it's not fair," she added.