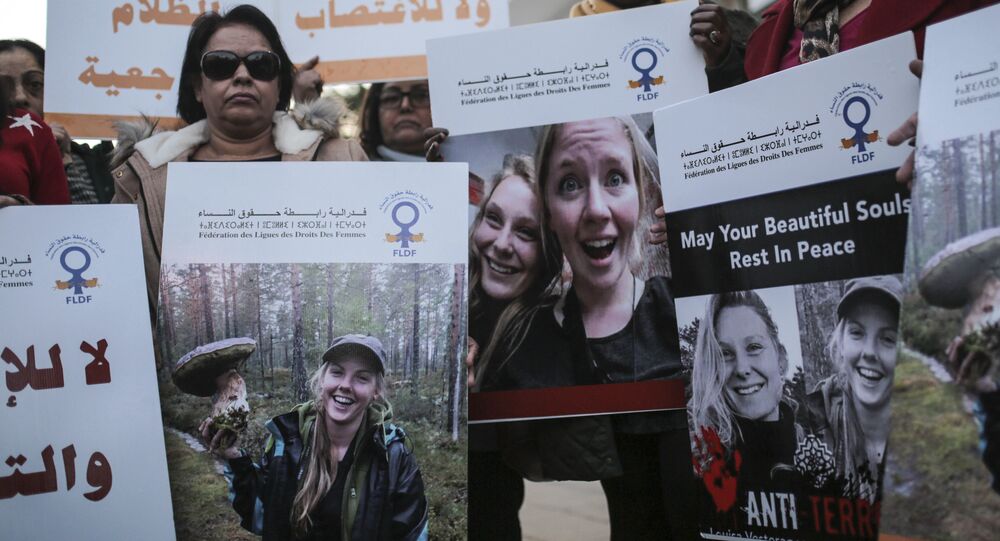 The number of arrests following the ghastly killing of two Scandinavian hikers has reached 19, spurring fears of far-reaching consequences for the Moroccan economy, which is heavily reliant on tourism.

The recent batch of arrests conducted in connection with the macabre murder of Louisa Vesterager Jespersen (24) of Denmark and Maren Ueland (28) of Norway include the alleged ringleader of the terrorist group, the head of Morocco's central office for judicial investigation, Abdelhak Khiam, said, as quoted by AFP.

Investigators said that the terrorist cell, dismantled through a series of arrests in several cities, was made up of 19 members, including three with terror-related criminal records.

Abdessamad Ejjoud, a 25-year-old street vendor living on the outskirts of Marrakesh, was identified as the "emir" of the group. According to Khiam, Ejjoud had formed a cell that discussed how to carry out a terrorist act inside the kingdom, targeting the security services or foreign tourists.

Ejjoud was said to appear in a video shot a week before the murders, in which four main suspects are seen pledging an oath of allegiance to Daesh* and its leader Abu Bakr al-Baghdadi with a black Daesh flag hanging in the background.

Under the influence of their "emir", the group is said to have specifically chosen the Imlil region frequented by tourists, where it targeted the two tourists in a deserted area, Khiam said. The others suspected of direct involvement in the killings were Abderrahim Khayali, a 33-year-old plumber, 27-year-old carpenter Younes Ouaziyad, and Rachid Afatti, a 33-year-old street vendor.

Despite having sworn allegiance to Daesh, the cell had no contact with Daesh operatives in conflict zones, be it Syria, Iraq or Libya, Khiam assured. This impression was previously voiced by Boubker Sabik, a spokesman for the Moroccan security and domestic intelligence services, who described the suspects as "lone wolves", who "need no permission from their leader".

Thomas Hegghammer, a Norwegian Defence Research Institute researcher and one of Europe's leading experts on terrorism, described the killings as "very amateurish, improvised and opportunistic" that took almost no planning. According to Hegghammer, getting media attention was the single most important goal of the terrorist act. However, he also stressed that the killing of defenceless girls indicates how desperate Daesh have become.

The two women were found dead on December 17 in their tent in an isolated hiking spot en route to peak Toubkal in the Atlas Mountains, Morocco and the Arab world's highest. The tourists were stabbed multiple times before the murderers slit their throats and decapitated them, recording a graphic video of the killing, whose circulation Norway and Denmark are now trying to stop. According to multiple reports, the grisly video was sent to the bereaved families.

Morocco is generally considered safe for visiting and is heavily reliant on tourist income, yet has been rooting out Islamic extremism for decades. In 2011, it suffered a jihadist bomb attack in Marrakesh that killed 17 people, mostly European tourists. Another attack in Morocco's financial capital Casablanca in 2003 killed 33.

Since 2002, Morocco has dismantled 185 terror cells and taken measures to rehabilitate those arrested, Khiam said, identifying the origins of extremism as "insecurity, illiteracy and ignorance".

Tourism is a pillar of Moroccan economy and the country's second-largest source of employment, only after agriculture. The sector accounts for 10 percent of national income and is one of the country's main sources of foreign currency.

* Daesh (ISIS/ISIL/IS/Islamic State) is a terrorist organisation banned in Russia.