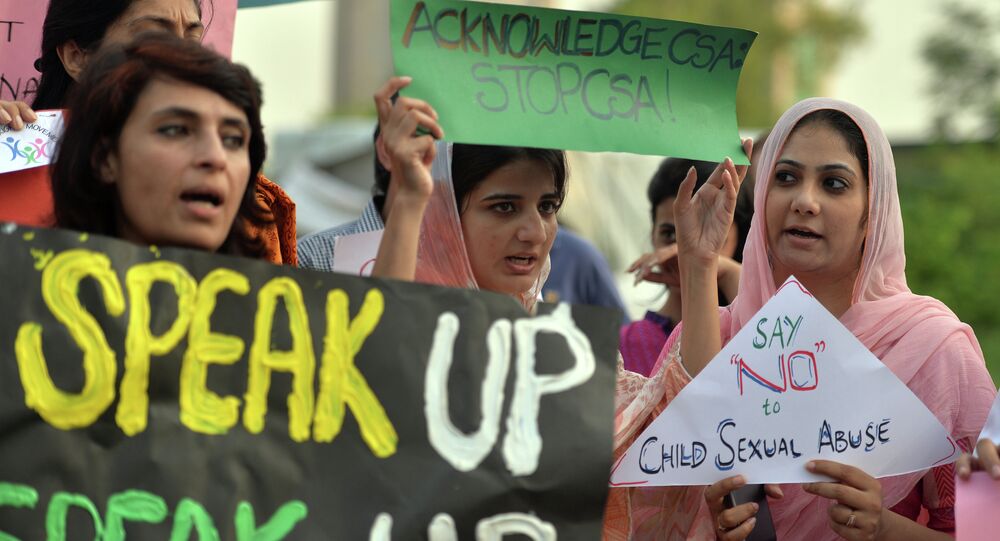 In 2008 and 2009, a group of Pakistani and Afghan men sexually exploited 47 young girls in the UK town of Rochdale. The grooming gang members were only convicted in May 2012, even though victims consistently reported the incidents to police immediately after they took place.

UK Home Secretary Sajid Javid has stated that he does not rule out that men of Pakistani origin become involved in grooming gangs due to cultural reasons.

"There could be – and I'm not saying there are – some cultural reasons from the community that those men came from, that could lead to this type of behaviour. For me to rule something out just because it would be considered sensitive would be wrong," he told the BBC.

Javid pointed out that it was "self-evident" that there are a high proportion of men of Pakistani heritage involved in recent high-profile child sex abuse cases and that it would be wrong to dismiss this sensitive information.

In this regard, he specifically referred to the 2008 Rochdale grooming scandal, given that it was related to his home town and involved men of Pakistani background, like the home secretary.

He recalled that he still visits the UK town of Rochdale because he has family there which he "deeply" cares about.

"When I heard about – and there has been more than one case – grooming gangs where almost every individual involved is of Pakistani heritage […] I can't help noting the fact that Rochdale is a town that means something to me and I am also of Pakistani heritage," Sajid stressed.

His remarks came after he was harshly criticised for tweeting in October about "sick Asian paedophiles" from the Huddersfield grooming gang, who were "finally facing justice" and found guilty of sexually abusing girls as young as 11.

Twitter users remains at odds over Saijid remarks, with some posting rather sarcastic comments on the matter.

There most definitely is — and we can't mention the reasons for fear of making the liberal activists "uncomfortable".

What’s the ‘cultural’ reasons behind the white grooming gangs (in the majority)?

Could be Javid? You really need to have a chat with Police Forces, Social Services and Child Charities throughout the UK as obviously you are beyond ignorant to this sad reality

Such criminals exist where there is a hatred for a group & the chance to abuse. Sajid’s stance will not solve the problem because it does not recognise this fact. It is great for giving the Green light to morons of Sajid’s calibre to persecute a community though😒

Dont worry we know india is the land of rapes, you arent immune, mother ganges is home to the worlds worst rapes.

In August, the UK's Court of Appeal upheld a rule to strip three members of the Rochdale grooming gang of their British citizenship, in a move that was hailed by Sajid.

Abdul Aziz, Adil Khan and Qari Abdul Rauf were part of the nine-strong grooming gang found guilty of grooming and sexually exploiting a number of young girls. Although victims constantly reported the incidents to police immediately after the abuse took place between 20078 and 2009, the gang members were only convicted in May 2012.