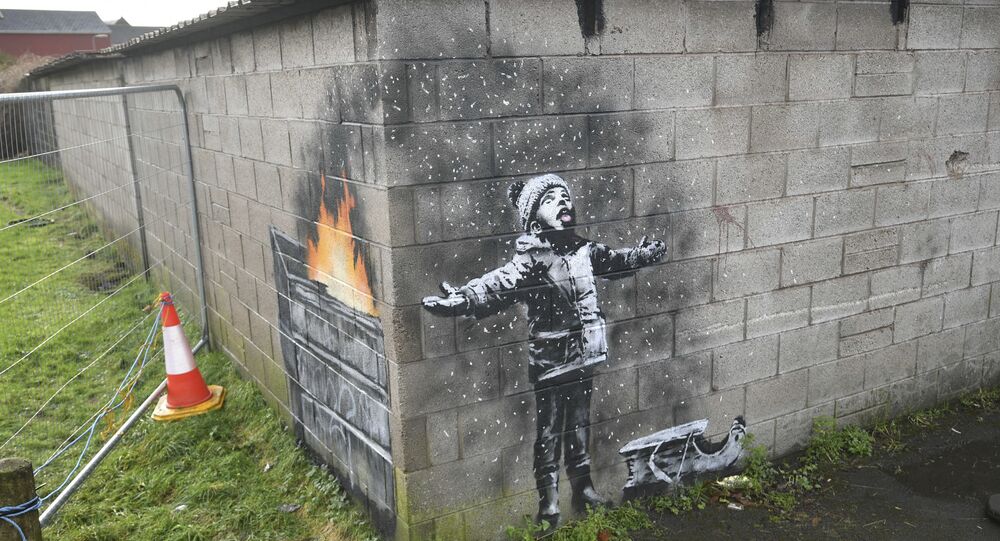 The Welsh town of Port Talbot, where residents have tried to attract attention to their environmental problems for years, became famous overnight as the elusive street artist painted hot-spot graffiti on one of garage there. It was almost immediately fenced off to preserve the rare site, which could hardly keep some rather tipsy local lad away.

Police were called to the garage with Banksy’s newest mural Season's Greetings in Port Talbot after someone, referred to as “drunk halfwit” on the local community’s Facebook page, tried to pull down the protective glazing, put there just hours before. The perpetrator was chased away by a guard, extra security staffers have been put at the site, bringing the Welsh city into the national spotlight.

The corner-round mural on local Ian Lewis' breeze block garage, depicting a boy catching flakes with his tongue on one side and a burning rubbish bin, sending these particles into the air, on the other wall appeared just a week before Christmas. Banksy claimed the authorship on his verified Instagram page with a post titled Season’s greetings. To the sound of a sweet Christmas tune, a drone camera glided around the garage, then buzzed away, showing the Welsh town’s industrial landscape.

The garage with the artwork of the mysterious and, incidentally, pricey artist immediately turned into an attraction. The local council has brought traffic wardens there to manage the art fans’ flock, while a fence has been put around it. The mural was also covered with a plastic shield, partly financed by Hollywood actor Michael Sheen, who came from Port Talbot. He is also contributing funds to pay for security.

Local activist Gary Owen has told WalesOnline that he contacted Banksy this summer and asked him to draw public attention to the environmental problems. Residents have long complained about the issues saying the town’s steelworks throw black dust into the air, covering everything from cars to pets.

“I think it’s really good for the people of Port Talbot, that someone as world-renowned as Banksy would do that. I suggested it [be] more like seagulls with gas masks but, when I saw it, it does make you think. It’s thought-provoking”, Owen said.