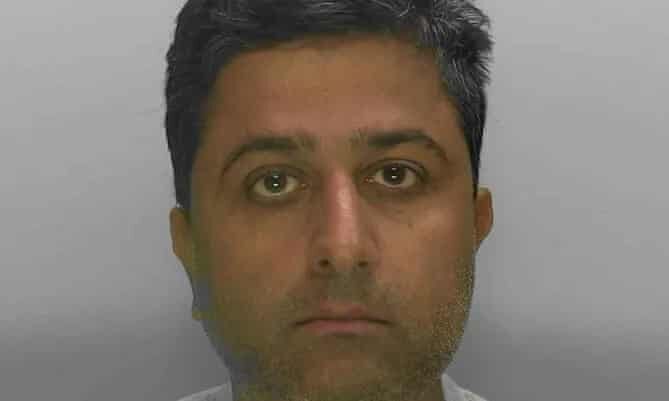 Zahid Naseem, a wealthy London banker, murdered sex worker Christina Abbotts at a flat in Crawley, near London's Gatwick airport. The victim was living a secret life as a high-class sex worker.

Naseem, a father-of-two, was jailed for life at Lewes Crown Court on Friday, 21 December, with a minimum of 19 years in prison.

He contacted Christina — who used the pseudonym Tilly Pexton — on a website for sex workers and agreed to meet her one night in May this year. He took a taxi from his home in Amersham, on the other side of London, to her apartment.

They then went to a supermarket together and bought Champagne and shared cocaine before a night of sex, drink and drugs.

Watch: Moment police smash down door — and find killer banker passed out surrounded by booze and drugs: The pestle used to bludgeon high class escort Christina Abbots to death was on the sofa beside him https://t.co/ThCb2GC84E

​At some point in the early hours of 25 May — which was her 29th birthday — Naseem became enraged when Christina ignored him and spent time checking "happy birthday" messages on her phone.

Murder Weapon Was From Pestle and Mortar Set

He lashed out at her, striking her 13 times on the head with a kitchen pestle and leaving her dead body in a pool of blood on the bed.

He pretended to be unconscious on the sofa, where he was discovered by police later that evening when they broke into the locked flat after being called to the scene by victim's friends when she failed to turn up to a birthday celebration in central London.

Men will rape/murder innocent women and headlines will be sure to highlight that they were athletes & whatever their favorite color is meanwhile women are murdered and headlines attempt to shame them with titles like “party girl” and degradation of the work they did to survive. https://t.co/EhHBR0FRnT

​In court Naseem tried to claim he killed Christina in self-defence after she attacked him when a sex game got out of control.

"The defendant's story changed over time, with him first claiming that he could not remember what had happened and refusing to accept any responsibility for Christina's death," said Jayne Cioffi, from the Crown Prosecution Service.

"Not only did Christina suffer multiple blows to the head, the defendant then failed to call 999 after the attack and for many hours afterwards, instead remaining in her flat until police broke in early the following morning. Naseem then feigned unconsciousness when discovered, believing that would help him to evade justice. He was wrong," added Ms. Cioffi.

Christina's family only learned of her life as a sex worker after her death.

​She had told them she worked for an international commercial caterer and had worked in South Africa, Mexico and Brazil.

His last job was with Aberdeen Asset Management, who fired him after he ran up debts of £20,000 on a company credit card.

Countdown to Murder: What Do We Know About the Death of Giulio Regeni?