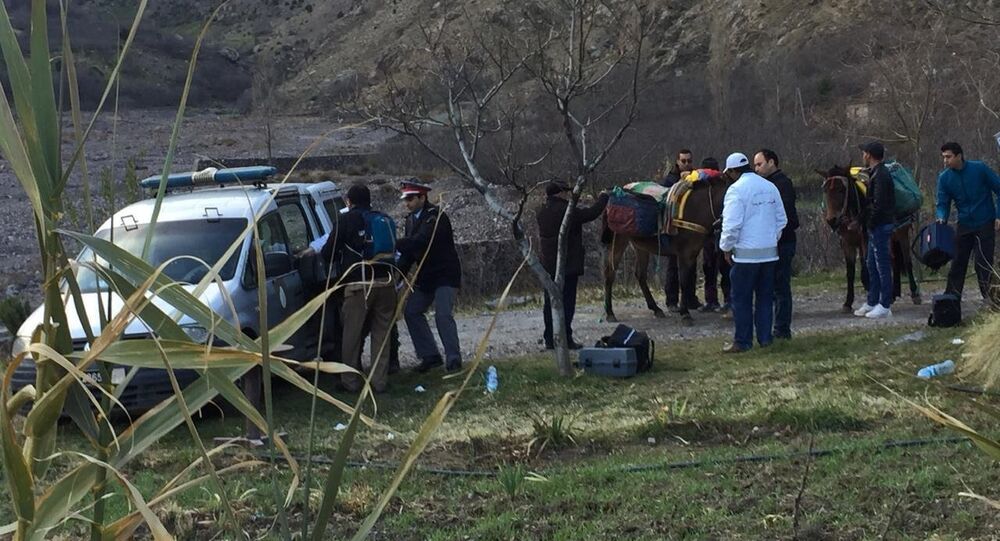 Both Moroccan and Scandinavian authorities stressed that the killing of the two backpackers, in which one was decapitated and the other one had her throat slit, was politically motivated and should be investigated as an act of terror.

Police authorities in Morocco, Norway and Denmark are collaborating to establish the authenticity of a video clip of the suspects in the brutal slaying of the two female Scandinavian hikers swearing allegiance to Daesh*.

In the video, the four suspected killers of Norwegian Maren Ueland and Danish Louisa Vesterager Jespersen appear to recite an oath to Daesh, with the organisation's black flag hanging behind, Norwegian national broadcaster NRK reported.

In the video, the men express their respect for Daesh leader Abu Bakr al-Baghdadi and pledge their support for the group's struggle in Syria. There is no mention of the actual killing or its plans, NRK reported.

"It is a fidelity oath to IS, where they make it known that they are al-Baghdadis soldiers", researcher Petter Nesser at the Norwegian Defence Research Institute (FFI) told NRK. "The purpose is likely to scare and also spread the message to potential Daesh recruits", Nesser suggested.

The video is currently being investigated by the Norwegian Criminal Investigation Service (Kripos) and the Danish Intelligence Service (PET) in collaboration with the Moroccan authorities. Nesser admitted that it is difficult to safely verify such a video, but said that it is quite similar to other declarations of allegiance. According to Moroccan sources, the propaganda video was recorded a week preceding the killing.

"PET is familiar with a video from social media in which four people who may be identical to those arrested in Morocco in connection with the killing of two Scandinavian women swear allegiance to Daesh and its leader in front of a Daesh flag", PET said, as quoted by Danish Radio.

In addition to the fidelity oath video, another clip showing the killing of one of the two women has been circulating on social media and was verified by the Danish authorities as authentic.

The two Scandinavian friends were found brutally killed in and outside of their tent near a path up to peak Toubkal, the highest mountain in North Africa. Shortly after the double murder, the Moroccan police linked the killing to terrorism and said it was being investigated as a terrorist act.

"This is a brutal and meaningless attack on innocent people we look upon in disgust and condemnation", Solberg said, as quoted by NRK.

Following an intense pursuit, four suspects aged 25 to 33 have been arrested in the city of Marrakesh. Three of the suspects reportedly shaved off their beards in order to not be recognized, but were arrested nonetheless.

* Daesh (ISIS/ISIL/IS) is a terrorist organisation banned in Russia