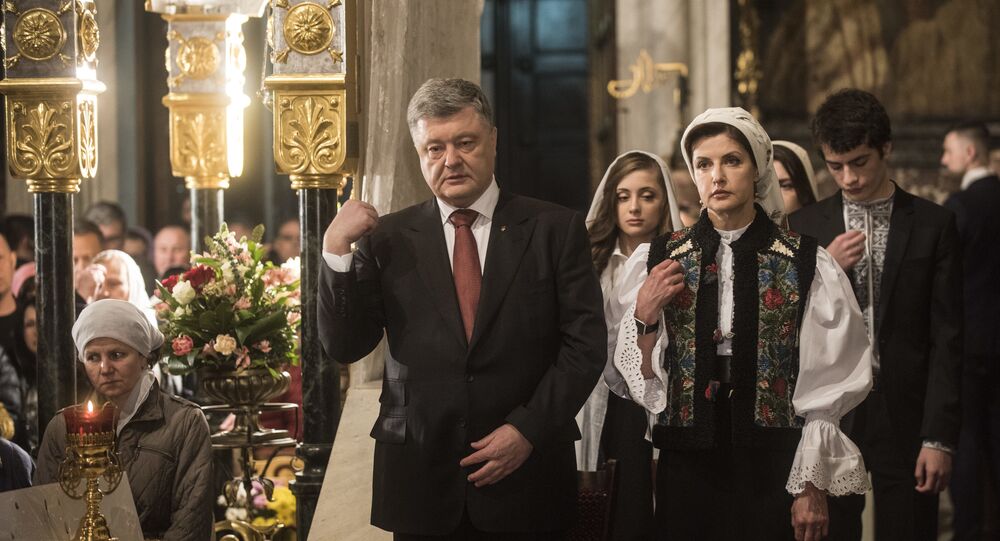 MOSCOW (Sputnik) - Metropolitan of non-canonical Pereyaslav and Bila Tserkva Epiphany Dumenko has been elected the head of a new church structure in Ukraine and introduced in this capacity by Ukrainian President Petro Poroshenko. The Moscow Patriarchate has called the situation around the autocephaly the "legalisation of schism".

The head of the "new church in Ukraine" was elected at the "unification council" in Kiev, which was held behind closed doors.

At the end of the council, the elected head of the "new church" went to Sofia Square and was introduced by Poroshenko. The event was broadcast by the channel Pervyi.

Poroshenko then announced the creation of the so-called Ukrainian autocephalous church.

"This day will make or has already made the history of Ukraine as the day of the creation of the local Ukrainian autocephalous church", he said.

The deputy chair of the Moscow Patriarchate’s External Church Relations Department, Archpriest Nikolai Balashov has commented on the situation, saying that the canonical value of the so-called unification council held in Ukraine earlier on 15 December is insignificant, and Constantinople now has a serious task to explain to the heads of local Orthodox churches why those who were recently considered schismatics should be now treated as clerics with the same rights.

"The Canonical value of this gathering of various individuals, led by a foreign bishop from France, who does not understand a word in Ukrainian, and the president of the country, whose constitution prescribes separation of church and state, is insignificant for us. The [event] brought together individuals, the majority of whom has no legal ordination of a bishop, while one of non-canonical clerics was elected a non-canonical head. The Patriarchate of Constantinople, which decided to give 'holy' status to this gathering by its bygone authority, now has a difficult task: to explain its actions to the rest of the Orthodox world and persuade its brothers, heads of local Orthodox churches, to acknowledge the equal status with yesterday's schismatics, who have never confessed sin of schism. I think that this is hardly a possible task", Balashov stressed.

Commenting on the move, Ukrainian President Petro Poroshenko said that he would go to Istanbul together with the head of the "new Ukrainian church" Metropolitan Epiphany in early January, adding that he expected to receive a tomos of autocephaly from the Patriarch of Constantinople.

"Let me introduce the newly elected primate, Metropolitan Epiphany of Kiev. He will have a mission together with the Ukrainian president to go to Constantinople in early January and get a tomos", Poroshenko said from the stage on Sofia Square, as broadcast by the Pryamyi channel.

CC BY 2.0
ROCOR Supports Canonical Orthodox Church of Moscow Patriarchate in Ukraine
The unification council was meant to choose the leader of the newly independent Ukrainian Orthodox church and adopt the structure’s statute. The Ukrainian Orthodox Church of the Moscow Patriarchate (UOC-MP), which has been the only canonical Orthodox church in Ukraine for hundreds of years, has refused to take part in the unification council.

The Moscow Patriarchate calls the situation around the autocephaly the "legalisation of schism", saying that it would have catastrophic consequences and would affect millions of Christians in Ukraine and other countries, and has already broken the Eucharistic communion with the Patriarchate of Constantinople.